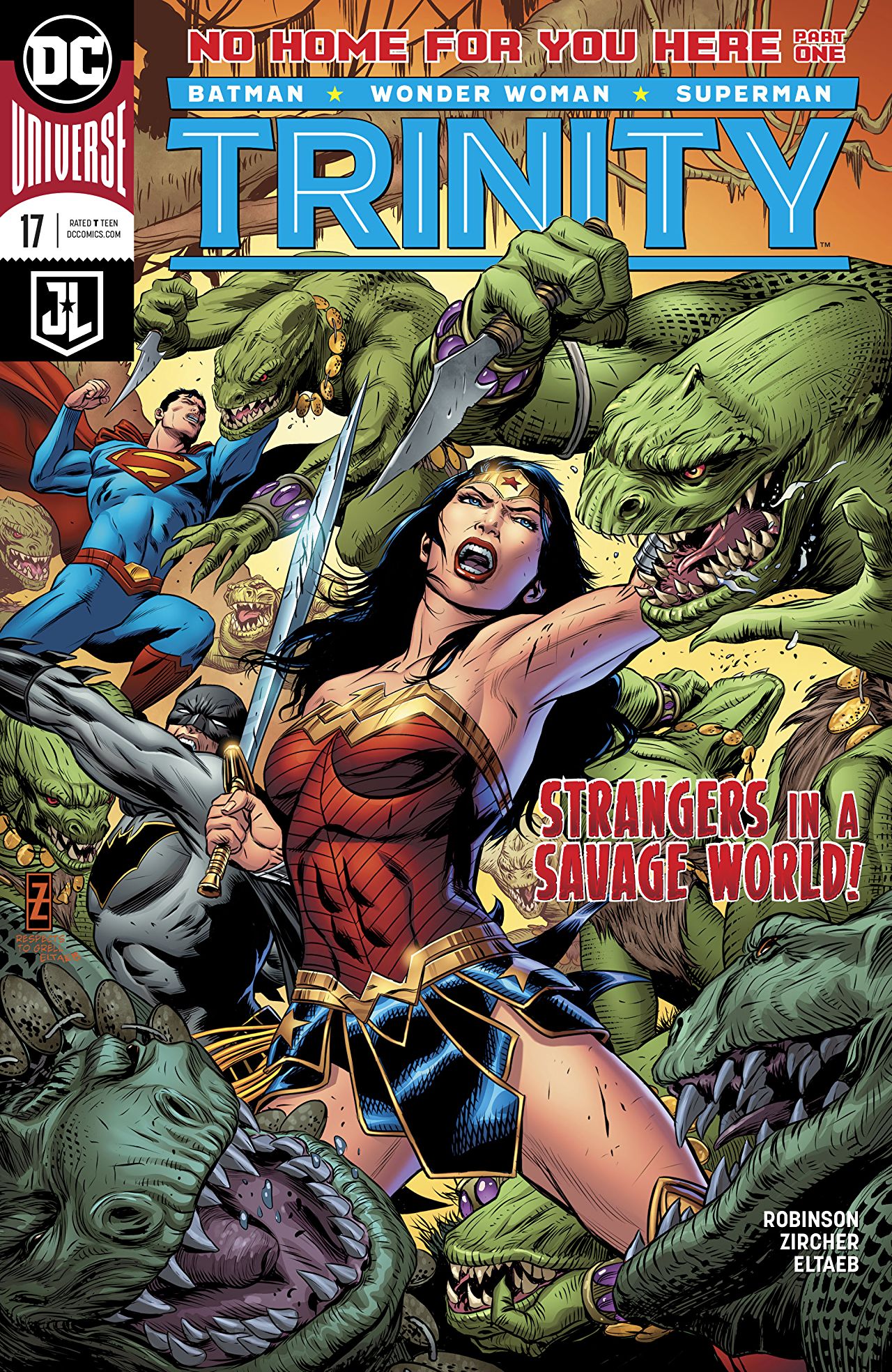 Overview: The Trinity recount how they came to be in Skartaris during their search for the hidden island of Themyscira.

Synopsis (spoilers ahead): The Trinity are in the process of being interrogated by an unknown questioner. They start explaining the story of what happened in their search for Themyscira. They’d been scouring the globe looking for interdimensional portals but their long search has not delivered any results. They finally come upon a portal that could potentially lead to Themyscira but they notice that there is a small boat being sucked into it. They leap into action to save the boat, but as they get near the portal, Superman feels the influence of strong magic and starts to become weaker. Batman takes charge and uses the Batplane to save the boat. Unfortunately the Trinity get too close to the portal in the process and get sucked in.

They emerge in free fall in the skies over a jungle. The Batplane is destroyed and all the heroes are alive and together, except Superman is powerless due to the magic of the island and Wonder Woman is blind. The Trinity set off exploring the jungle and Wonder Woman mentions that her heightened senses detect “reptile-humans” following them. Before anyone can explore her statement further, Batman finds a SR-71 fighter jet from the Vietnam War hanging in the trees as some sort of shrine. At that moment, the Trinity are attacked by the lizard men Wonder Woman sensed earlier. Despite being physically compromised, Superman and Wonder Woman are able to hold their own in the fight. Wonder Woman mentions that the battle is more about endurance than skill, and eventually the heroes triumph. The heroes move on and Wonder Woman explains that they are lost in a land called Skartaris. As she says this, a voice behind them exclaims that it is good that he found them and introduces himself as an ex-US air marine Travis Morgan who is also known as Warlord.

Analysis: Trinity #17 kicks off the new three part story arc for this series from a new creative team. As introductory issues go, this one plays it fairly safe and keeps things simple. The story is told with the Trinity’s interrogation serving as the narration for past events. It’s an interesting set up because the reader automatically assumes that there are some grave consequences that come out of this adventure. I don’t think many people would be able to question the Trinity in an interrogation room so we are led to believe that something happened that got the attention of a very powerful organization.

One of the aspects of this book that I didn’t like was de-powering Superman and blinding Wonder Woman. I understand that it can be difficult to tell stories in a group book about two people with god like powers and a human without powers, but I think it’s possible. The plot device of weakening Superman and Wonder Woman is one that is overused in my opinion and it really takes me out of the story because it seems to happen just for the sake of moving the plot along. It’s my opinion that a book featuring the three most iconic superheroes of all time can tell compelling stories without messing with their powers at convenient times.

I must confess that this is the first time I’ve encountered Skartaris or Warlord and I have no prior knowledge of them. I did a bit of internet research to get more background on this and I have to say I’m intrigued. I don’t know how much of what I researched will be used in this story, but a land of overgrown jungles, dinosaurs and other creatures should be interesting.

The art in this issue is decent. It’s not something that resonated with me but I also didn’t dislike it. I think the colors in this issue are what really stand out. Skartaris is a lush landscape with many different creatures that require an extensive color palette to render. The different hues and shades of blue in the ocean sequence with the boat are also very well done. I thought the lettering in this issue contributed positively to the visual experience. However there is one panel, where Batman uses some type of sonic gadget on the lizard men, where I feel like adding some lettering would have been beneficial.

Final Thoughts: Overall, this is a safe but unspectacular opening to a new story arc. The mystery of what is happening with Skartaris and Warlord is enough to keep me interested but there isn’t anything here that truly amazes.