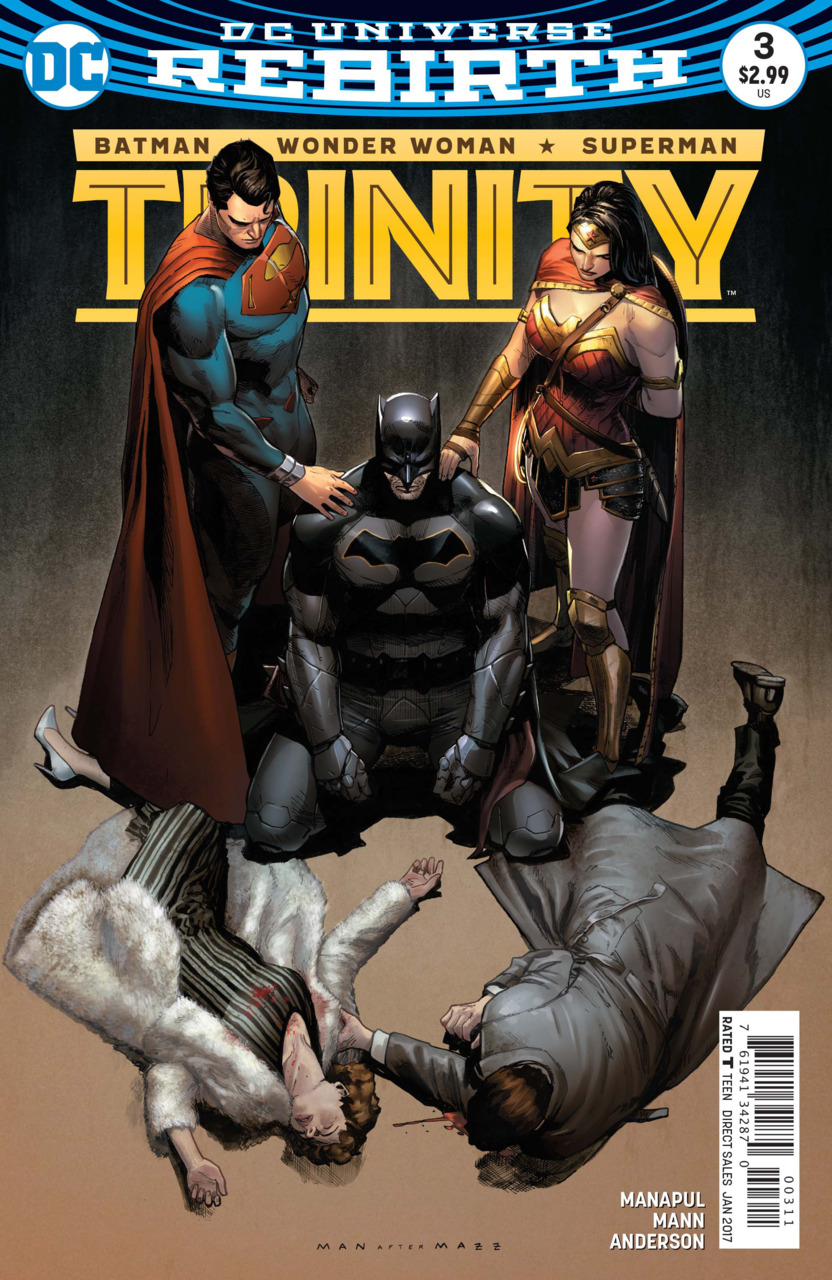 Synopsis: The issue starts with a very familiar scene outside a movie theater. A young Bruce is leaving the film Zorro with his parents and they decide to take a detour to get out of the rain. Batman rushes across rooftops to try and stop the inevitable murder he knows will happen soon. He realizes that he is lost and can’t find his parents in Crime Alley. He knows he can’t stop their deaths but only wishes to see them one more time. With the sound of gunshots amidst the thunder and lightening, Bruce knows he is too late and collapses in an alley next to Clark and Diana.

In Wayne Manor, the young Bruce is undergoing therapy with Dr. Quinzel and explains his most recent nightmares. She suggests that his dreams are influenced by the odors from that night in Crime Alley. She suggests using new medicine developed by another doctor that can prevent his brain from connecting his emotional responses to certain olfactory stimuli.

On the rooftops of Gotham, Batman tells both Diana and Clark that he knows they can’t be in the real world because he does not know this city and he spent so much time conquering his fears in the streets of his Gotham. They head to Wayne Tower. At Wayne Tower (where the penthouse is basically Wayne Manor), Alfred tries to convince young Bruce that his choices that night did not result in his parents’ deaths. After taking his medicine, Bruce turns to see that Alfred looks like the Scarecrow. In terror, he backs up and the pair fall out the window.

Over the next two pages, we get an amazing few panels showing Bruce seeing the Trinity under the influence of the “anti-fear medicine”. They save both him and Alfred. Wonder Woman uses her Lasso of Truth to make young Bruce realize that the death of his parents was not his fault. Bruce realizes that he is speaking to Alfred on the sidewalk. As Alfred helps him up, he tells Bruce that he will always be there to remind him of that.

After saving the young Bruce and Alfred, Batman realizes that this strange reality is an opportunity to let go of the past so that they may move on to a better future.

The issue concludes with Lois ramming a truck through the barn door after numerous attempts to break in. She finds Poison Ivy trying to silence Jon and tells her to get away from her son.

Thoughts: With both the artwork and the writing, we have another solid issue for Trinity. I was surprised that this story did not deliver the same tone the last one did with Bruce reconnecting with a “what if” world like Clark had. This issue set the tone with the heartbreaking moment in the beginning with Bruce saying he knew he wouldn’t save them but only wished to see them one more time. The true reason for him being there was to finally let go of his self-imposed guilt. This realization proves to have a more lasting healing effect than just seeing them. Its helpful to know that Manapul is not going to be doing a “by the numbers” Trinity arc with each hero getting a fairy tale version of their lives and, instead, explore the brightest, and darkest, aspects of these characters.

The artwork was good as a fill in but I am looking forward to getting Manapul back. Mann did a very solid job depicting Gotham and his panels of the side-by-side views of the “fear toxin” Trinity and their true forms were very impressive.

In general, this series continues to give the readers very “down-to-earth” moments for these mythic heroes. Its great to see these three have very “human” moments. In its simplest form, this was an issue about a grieving son and his two friends being there for him to help him overcome his own doubts about himself due to a tragic event. The previous issue was about a young father getting a chance to connect with his own father in a way he never could before having a son. I hope we get this same trend in the next issue with Diana’s “twilight-zone” version of Themyscira.