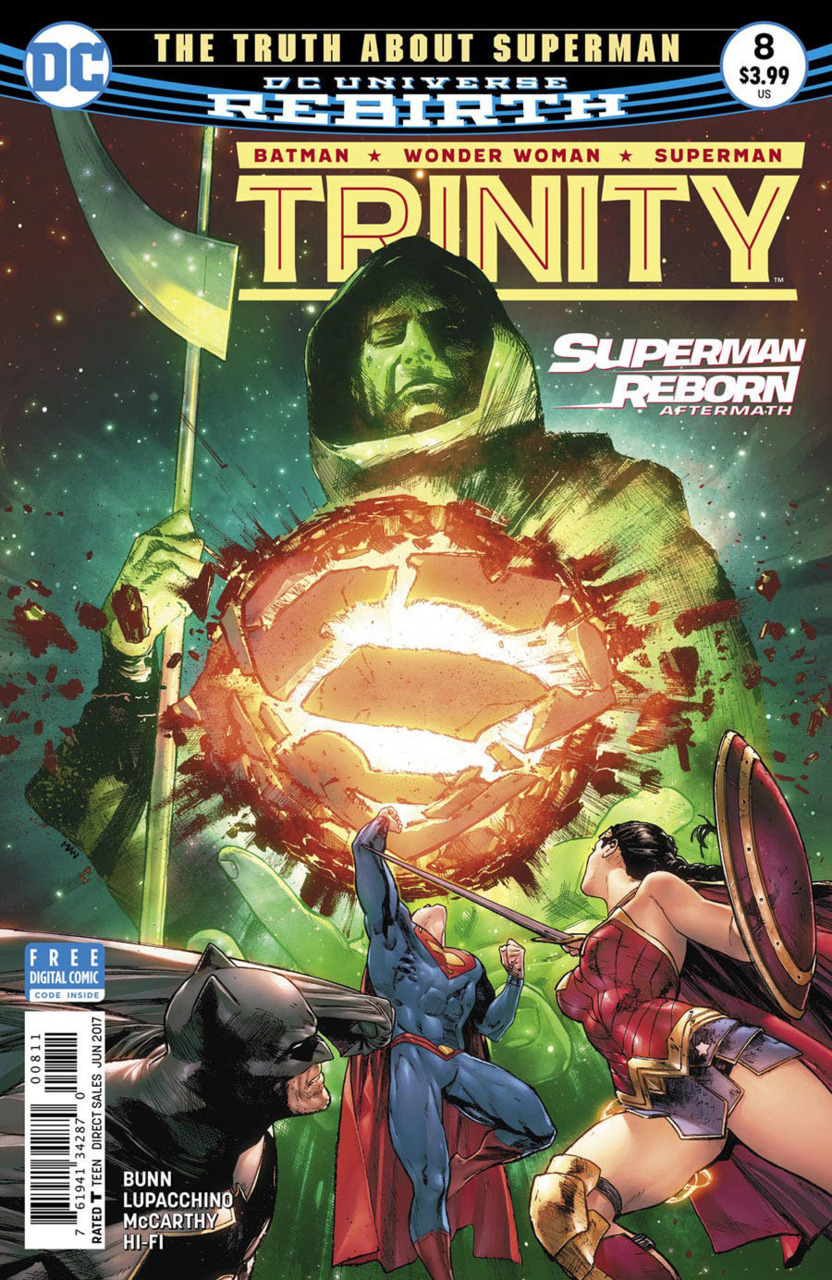 Overview: While retelling a dream in which he fights the New 52 version of himself, Superman begins to think the Trinity is caught up in a plot to warp the very realities of the multiverse.

Synopsis (spoilers): Opening to another seemingly beautiful day in Metropolis, the opening scene takes a drastic turn as a shockwave rocks the citizens of the city. As they look up to see what the cause is, they are surprised to see two Supermen trading blows above the Metropolis skyline. As the two battle each other they quickly realize the danger the people are in and rush to save them. Despite working together to save everyone, one Superman, who is very clearly from the New 52, resumes his attack while shouting “there’s only one real Superman”. As the fight rages on, we learn that it is the main continuity’s Superman narrating this “dream” he constantly has to Batman and Wonder Woman. He admits that these dreams feel so real and he even begins to wonder which Superman he really is.

Bruce highly doubts that this is anything more than a bad dream. Superman, however, is convinced that this event has already happened and that someone is messing with his reality. Batman wonders if this manipulation could somehow be used to weaponize Superman against them. Superman also divulges a cloaked man in his past telling him that he knew more about him than anyone and that he must be the one who is behind this.

Elaborating on the dream even further, Clark states that he has only told his family besides Batman and Wonder Woman. He feels that his trust in them is another reason why they appear in the dream as well. In the dream, the pair attempt to break up the fight between the two Superman. The New 52 version tells them that he will keep fighting for the life he had and he won’t let it be forgotten. The main continuity Superman begins to wrestle with the idea that this “fight” has been taking place over and over again in someone else’s mind. As if on cue, various versions of the Trinity come flying to the city of Metropolis to reveal that the fading away that the New 52 Superman is worried about only seems to take another form.

After seeing the multiverse revealed Superman concludes the dream. Batman proposes that they not reveal the possibilities that Superman’s dream could reveal. Until they know more, the Trinity agrees to keep quiet about this. Superman decides that they should turn their focus on finding this mystery man from his past and finding out how much he really is to blame for this reality warping.

Thoughts: After last issue’s focus on a group of villains coming together to hatch a plot against the Trinity, this issue certainly branched off to a different storyline. Since the inclusion of the Watchmen and Rebirth, this issue felt very much like a continuation to the “lost years” that were eluded to in the Rebirth Special. If not for Rebirth, this issue could have served as a great fourth wall breaking story that reveals how our comic book icons feel about reboots and the multiverse. Since the mystery of Rebirth is still very prevalent, this doesn’t seem to be the case and it will most likely tie into the bigger Rebirth storyline down the road.

Although the nature of their bond is hinted at here, Cullen Bunn does not spend as much time as Manapul did in the previous arc exploring the relationships within the Trinity. Don’t get me wrong, it was nice to know that Clark trusted his friends well enough to have them help him subconsciously in his dream. It just did not convey the same emotional pull that Manapul pulled off in the first arc.

I did like how Bunn incorporated the idea of dying or fading from the timeline as only a means of becoming something else for these characters. My optimistic side likes to think he’s referring to the legacy that each version of a character is able to leave behind as their passage from their continuity.

Building off that last point, the artwork was solid in this issue and I really enjoyed how Emanula Lupacchina depicted the various incarnations of the Trinity from the multiverse. I would imagine this to be incredibly fun but daunting to an artist as they get to play with the different versions, but they also need to depict these versions accurately or suffer the fan backlash. I was a fan of this and wonder what will be carried forward from this dream sequence.

Overall, this issue had some very interesting implications and sets up an interesting conflict between the Justice League if this secret of a puppet master behind their reality is revealed. Still being confused with last issues relevance, I am still very much onboard with this title and intrigued to see where it is headed.