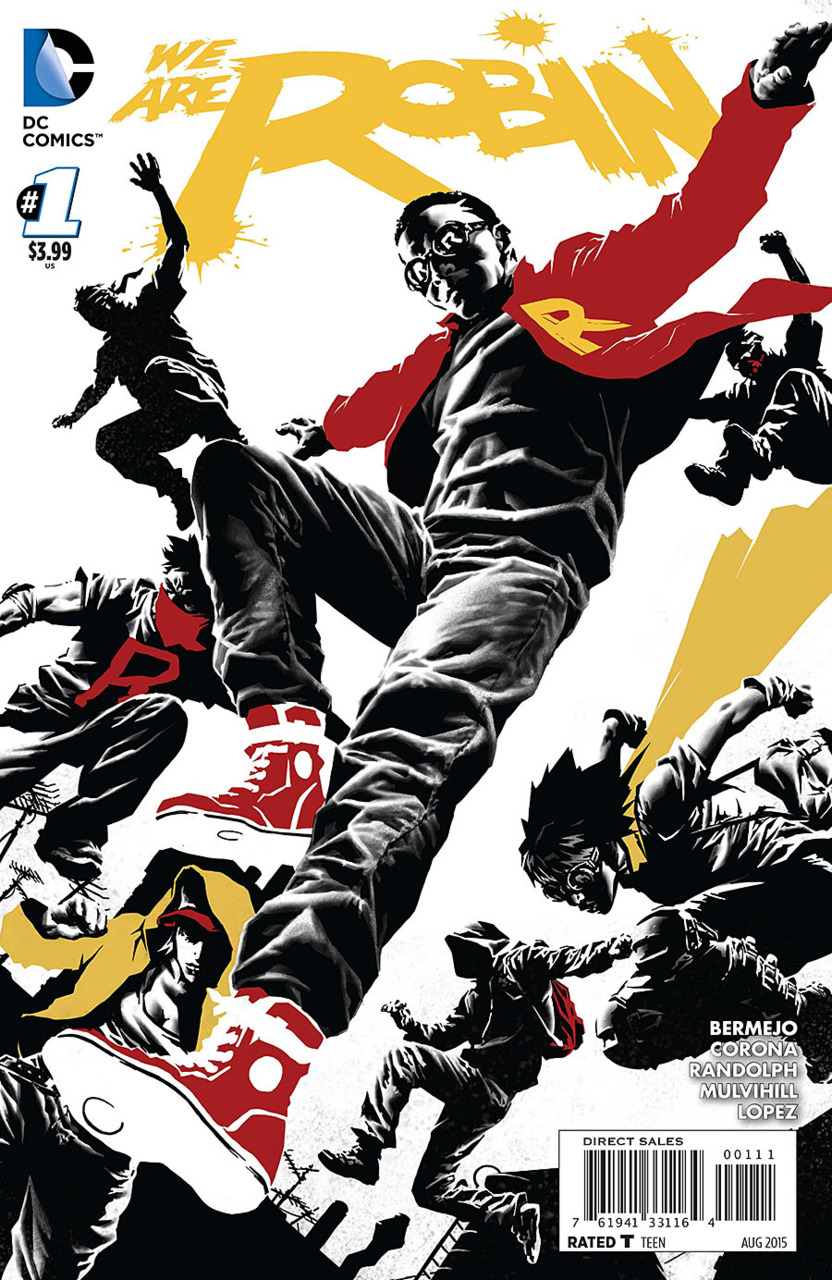 This new series opens up with a young Duke Thomas (previously seen in Scott Synder’s “Endgame” story arc) being beaten up in a fight at his school. However, Duke soon turns the tide on his attackers and surprises them with same fancy acrobatics and fighting moves…as this is happening, Duke’s voice over talks about how he is becoming addicted to the fighting and the adrenaline rush. As Duke is knocked out from behind, the GCPD arrive to break up the fight…as the gathered crowd disperses, one of them remains behind and quickly snaps a picture of Duke before leaving.

Regaining consciousness in the care of Leslie Thompkins, Duke’s mind briefly flashes back to his rescue by Batman during the events of “Endgame” and he and Thompkins briefly discuss their disappearance after those events. As she scolds him for getting caught fighting again, the two talk about how Duke appears to be the only one looking for his missing family.

We then cut to a panel that contains a text conversation between several unknown characters, all of them sporting some form of the Robin “R” logo and talking about recruiting their next target before he gets away. Back with Leslie and Duke, she drops him off at his new foster family…however Duke wastes no time in leaping from the fire escape and talking off onto the streets of Gotham City. As Duke makes his way down into the sewers, we see that he is being followed by several unknown people. Eventually Duke stumbles across a shanty town deep within the sewers where a man is seen speaking to the assembled homeless. However, the man realizes that a newcomer is present (thanks to Duke’s cologne no less) and the mob of homeless people begin to pursue Duke…however they are quickly confronted by several teenagers clad in green, red and yellow…declaring that they “are Robin!”

In the issue’s epilogue, we witness an unknown figure who seems to monitoring the situation with the Robins via bat-shaped video camera. The character’s voice talks about how he has seen people choose to defend the city on their own…but now the city is choosing it’s defenders. As a vault door opens to reveal several costumes all emblazoned with the Robin color scheme, the characters thinks that instead of the city’s future being filled with the cold, dark and grey…it instead will be filled with color.

Well I can definitely say for a fact that I am invested in this new series by Lee Bermejo and Jorge Corona. Pulling the character of Duke Thomas out of the pages of “Batman” seems to be a good move as his appearance is very recent and the character is still fresh in our minds…however I am looking forward to meeting the cast of characters to come, as there were several new appearances that were seen in one of the final panels of this issue.

Overall I really liked the art style, and I’m not always one to comment on the art…but for some reason this style really gels with the story. It has an extremely fresh look but still conforms to what you see in most traditional comic book forms. Loved looking at the panels and really enjoyed the final shot of the assembled Robins protecting Duke.

I am intrigued as to how these various characters assembled together…although the sneak preview showed how they operated and even mentioned some of the characters themselves; I eagerly await the explanation as to how these various people managed to find each other. Also, is there someone secretly backing this new group? Is the unknown character seen in the epilogue a friend or a foe? And does the bat-themed camera imply that this is a returned Bruce Wayne who is watching over this new flock of Robins? Questions, questions and more questions…but I find that good stories always force you ask yourself “why?”

Overall this was a good first issue, however I was a tad confused as to the status of Duke Thomas’ parents…didn’t they die at the end of “Endgame?” Also, not sure I’m a fan of the rebellious, young teenager persona that they’ve given him…wasn’t a fan when that happened to Jason Todd, so I hope that this wears off soon.