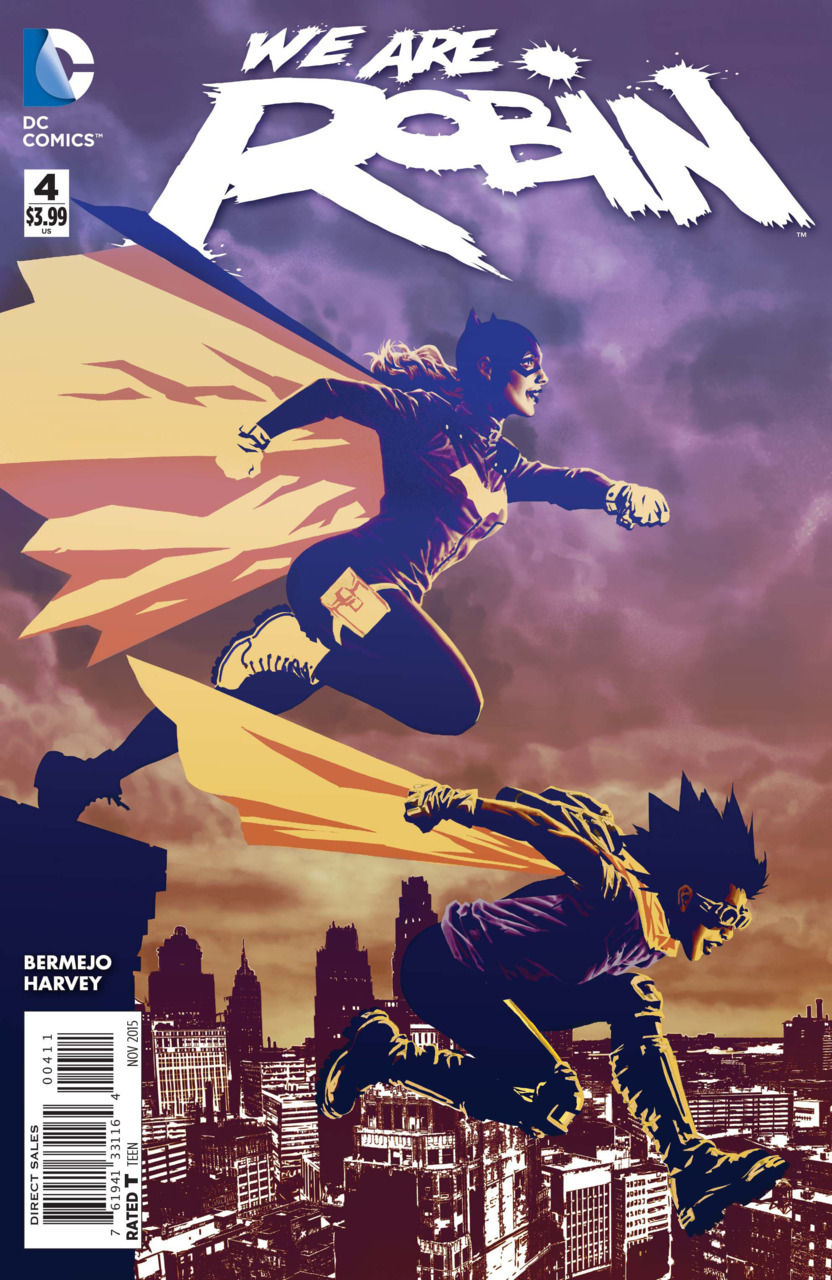 The issue opens with a reporter detailing the aftermath of the bombing in the Hall of Records. The reporter confirms the death of “Robin” Troy as the only casualty of the bombing and the questions being raised now following his death. Some, including Batman, are concerned that the “Robin” movement is doing more harm than good while many Gothamites believe that taking a stand as the Robins are is the only way to fight the terrible crime in Gotham.

Following the report, Riko (“Robin R-iko”) is in class and appears to be speaking to an imaginary Batgirl. She is discussing with Batgirl about the way she feels about Troy’s death. Following her teacher interrupting her “conversation”, Riko is walking home while we’re shown various tweets about her behavior as well as students’ views on current events. It seems clear that they are not as affected by what has happened as the Robins have been following the bombing.

Once home, Riko talks with her mother who is concerned about the Robin movement. Her mother admits Troy was brave but that he was foolish for attempting what he did. Riko then leaves her house to go on patrol and sees a fire. It turns out to have been started by some boys wanting to “catch” a superhero and take a photo of them. Things turn ugly as Riko tries to get them to put out the fire and they begin to fight.

Batgirl arrives on the scene and quickly takes care of the “cape catchers”. She then has a heart-to-heart with Riko about what it means to be a symbol. Batgirl ends with saying that, in your fight for justice, “you’re never alone”.

I was glad we got to see the fallout from the previous issue with Troy dying in the bombing. With the last issue taking such a dark turn at the end, I was hoping that we would get to see how these Robins must realize what they are doing has real consequences. Having Batgirl show up to drive that point home was a good way to connect the Robin movement to an established hero who actually supports their actions.

As much as I wanted to see Alfred bring “The Nest” to the Robins, I was really happy we got some real character development of one of the Robins. We already have a backstory for Duke Thomas so I was glad we got to see a new Robin get the spotlight. Her struggling with Troy’s death seemed very real and emotional.

My only minor problem with this issue was the artwork. Compared to the previous issues, I felt the artwork was a bit of a step down. The panels felt disjointed and slightly difficult to follow with a lot going on in the background. I understand what the artist was trying to do by showing other events happening while the focus was on Riko but it just did not connect with me.

Overall, I enjoyed this issue very much since Bermejo started to explore other Robins and developed Riko’s character. Up until this point, its been difficult to recognize all the Robins but it seems like that is changing. Seeing a Robin hallucinate to some degree and potentially deal with post-traumatic stress disorder was an issue I think needed to be fleshed out. These Robins are normal kids that are trying to tackle real problems and injustices so it only makes sense that the consequences reflect that realistic tone we are getting with We Are Robin.