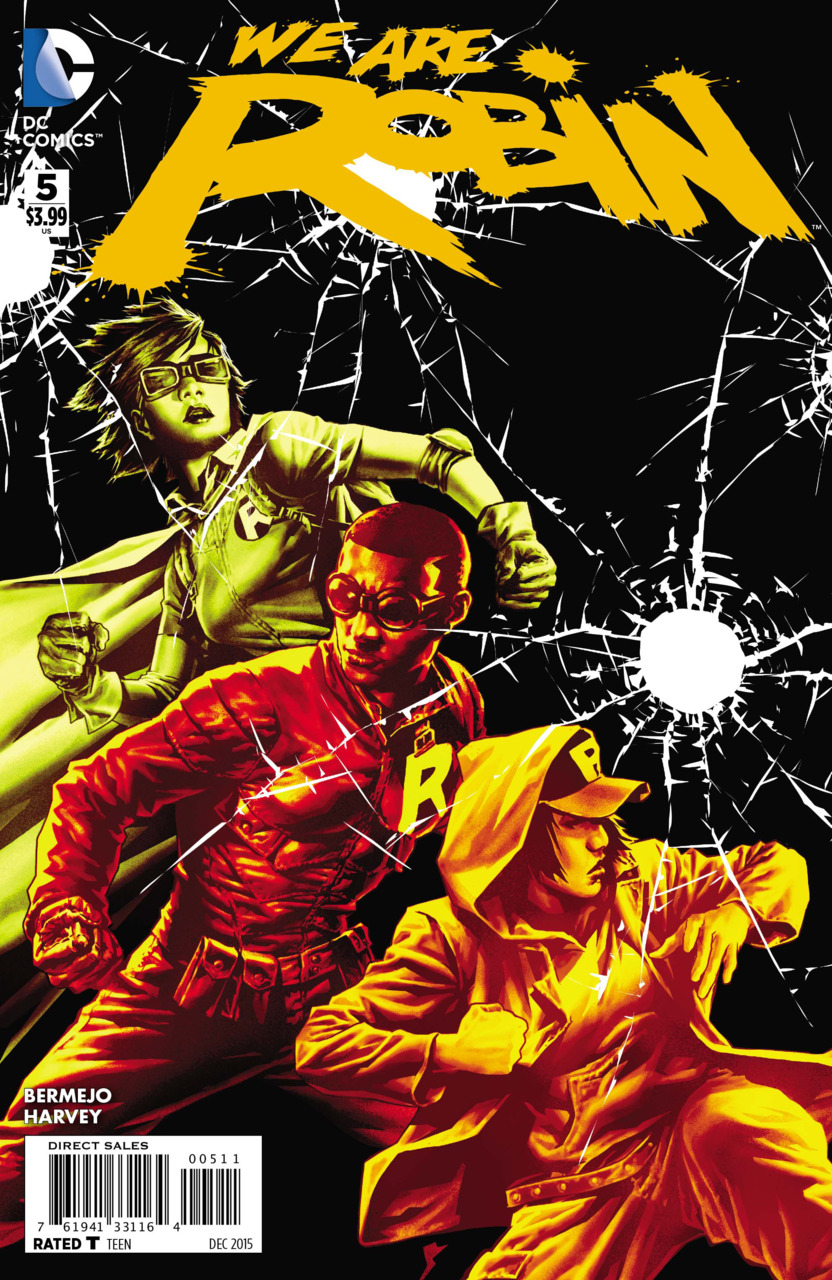 Opening in a dark alley of Gotham, a homeless man is being recruited to join the underground army. The recruiter tells the homeless man that he can be cleansed by “the masters”. Coming out of the shadows, a Talon from the Court of Owls approaches the recruiter, El Topo, and determines that their army can’t be filled with the worst of society but must be “grown”. Despite some successes, the Talon sees an end to this plan to use the homeless and kills El Topo.

At a diner in town, Robin Isabella “Izzy” Ortiz is waitressing when a gangster named Hector begins to cause trouble. He threatens her when she gives him pushback. Later when she leaves the diner, Hector and other gang members attack her. As she is fighting back, other Robins show up to lend a hand. After beating up the gang members, it’s revealed that Hector is Izzy’s brother.

All the Robins meet up at an abandoned toy factory. They are there on a request from Riko who begins to tell them about the time the Joker tried to poison Gotham with poison-filled toys and the Batman stopped him. She gets interrupted by the team who begin to argue about their overall purpose as a movement. While they argue, Alfred is watching them through camera feeds in the building.

Eventually he surprises them by backing a “Robin” truck, stocked with weapons and gear, into the building. A disguised Alfred then explains to the Robins that he is going guide and train them to complete their mission to help Gotham.

After leaving the factory, the team is on a train discussing Troy’s death and Robin “Dre” Cipriani makes the point that none of them really knew him or each other. Duke takes this opportunity to exploit the fact that Dre is a “mob” kid. They begin to argue but Robin “Dax” Chill convinces Dre to leave the train with him.

Once the group is split up, the last pages focus on Duke, Riko, and Izzy. They are discussing Dre’s mob connections and Izzy’s abusive brother when Duke is shot by Hector in a drive-by. As the car speeds away, it is stopped by the Talon from the beginning of the issue. He kills Hector and the other gang members. The Talon then tells the three Robins that he will teach them how to dispense “true” justice.

In the epilogue, Alfred returns to a scrap yard which contains an underground bunker. Alfred gets in a military jeep and speeds out of bunker and back onto the streets of Gotham stating that he will bring home all those that had fallen from the nest.

This issue had an good combination of overall plot development as well as introducing more backstory to some of the Robins. Getting the reveal of both Izzy’s and Dre’s family ties helped to understand these characters a little better. It seems clear that Bermejo will be sprinkling in backstories for each Robin with each issue.

The introduction of a Talon into the mix certainly brings the Robin movement into the big leagues. Prior to this, they mostly dealt with street level criminals and the homeless army. Now, we are getting to see who has been pulling the strings of the homeless army and the bombings and it turns out to be a villain that put Batman through the ringer. I am not sure how this will play out but I am hoping that the Robins will not be able to take on a Talon. The appeal of this series has been normal kids tackling crime in their own way by adopting an iconic symbol. If they are able to go toe-to-toe with an immortal assassin, it would be just a little too much for what this series is all about.

One big plus for me this series and this issue has been the use of Alfred. We are getting to see a very proactive father figure who is doing everything possible to protect these children as they embark on their crusade to save the city. Taking into account that he has had to bury Robins in the past, it just makes his mission that much more emotional and meaningful.

The art team bring us back to the tone of the previous issues, not counting issue #4, and delivers a gritty and action filled issue. The coloring brings this tone to life with dark oranges and browns mixed with heavy shadowing. Penciller Jorge Corona created a very creepy and haunting Talon that steals the show in every panel he appears.

Overall, this issue accomplishes both plot and character development and even finally revealed who had been controlling the homeless army from the beginning. Having it be the Court of Owls or a rogue Talon just makes me that much more excited for next month.