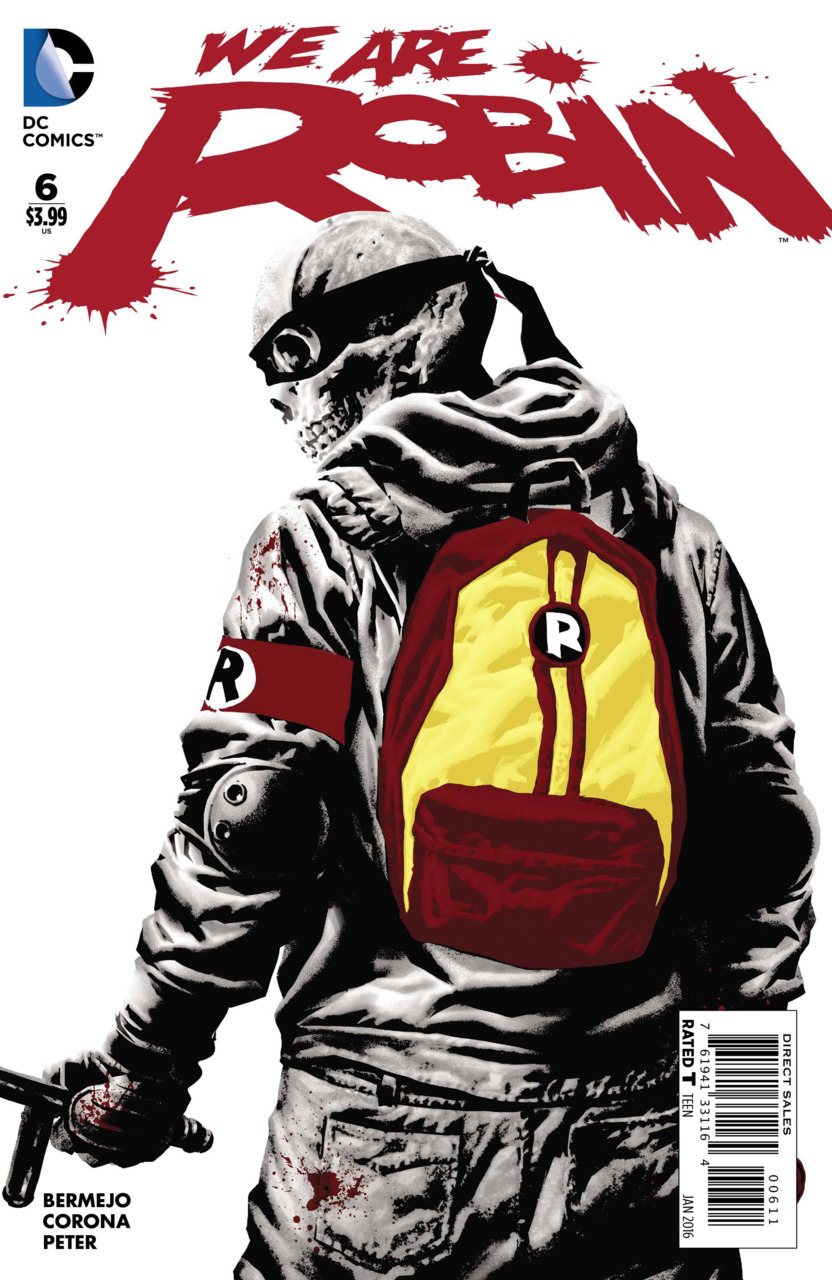 The issue opens with a news anchor discussing the recent plans the city has for rebuilding the Hall of Records following the bombing a few issues back. We then pick up right where the last issue ended with some of the Robins being confronted by a Talon from the Court of Owls. The Talon begins to tell them that they need to become killers and join him in order to survive the coming war. As he is talking to them, they try to attack him but he quickly puts them down while mocking their code they have adopted from Batman.

Izzy then picks up a gun from one of the dead gangsters the Talon had killed in the previous issue. Duke and Riko beg her to put the gun down and remind her that Robins don’t use guns. The Talon, however, is pleased that she is resorting to lethal action. Just as the standoff begins, a news helicopter shows up and begins broadcasting live to the whole city.

Meanwhile, Dre and Dax arrive at Dre’s apartment to interrupt his mother with another man from the Maroni crime family. After a brief exchange, Dax points out the Robins on TV and that they are close by.

Back at the standoff in the street, police arrive on the scene. As they are ordering everyone to put their weapons down and get on the ground, the Talon walks towards them and tells them he is going to kill them.

The police open fire on the Talon who begins to kill them all. Just as he is about to kill the last officer, the Robins, now reinforced with Dre and Dax, leap into the fray and attack the Talon. Duke’s inner monologue notes how they charge and fight as one unit and they finally understand the “we” part of “We Are Robin”.

This only lasts a second as the Talon regroups and subdues all the Robins. He states that his offer to them has gone unaccepted and that he must kill them now. Just then, a military jeep appears and opens fire on the Talon. It’s being driven by Alfred in disguise. As the Robins jump into the jeep, Dre says that they had him. The Talon refers to Dre as an “angel of vengeance” and asks him where he truly belongs before slipping into the underground subway tunnels.

In the epilogue, Alfred takes the Robins to a parking garage where he orders them to go home on separate trains. He informs them that they have gained the attention of the entire city and that they must now wait and follow instructions from the The Nest. Before driving away in another car, he blows up the jeep and tells them to wear masks.

Although not my favorite of the series, this issue did have some great action and left us waiting for Robin War. Knowing that the Court of Owls plays a hand in the conflict makes me very excited. The handling of the Talon in this issue was better than I was expecting. My fear was that the Robins would somehow beat a Talon in this issue which just would not seem at all possible for them. Having them rush the Talon and catch him off guard, however, was a great way to show them coming together but ultimately getting the beat down from a far more experienced opponent brought everyone back down to Earth so to speak.

There was even a surprising amount of humor in this issue that we have not seen in this series. With the series having a fairly dark tone, the moments of levity brought from Duke’s inner monologue was helpful in demonstrating how outmatched they were against a Talon and the fact that they are still just kids caught up in the “real” world.

As usual when it comes to We Are Robin, the artwork conveys the grittiness of the series. The art team is making sure we see the brutality and savage nature of the Talon as he murders the police officers. I was a big fan of the Court of Owls storyline and I always liked the different looks of the Talons. This Talon that we have been introduced to is made to be a hulking menace and I hope we get to see more of him in Robin War.

My only real negative of the issue was Alfred. I knew he was going to swoop in and save them but I was hoping for a little more from him in the epilogue. He just leaves them questioning and unsure of their next steps. He told them in the last issue he would be helping them and just when there is a perfect opportunity to open up about everything…he blows up a jeep (a little too close to the Robins I might add) and drives away. Well at least he told them to finally wear masks…

Regardless of the negatives, the issue was still entertaining and I know I am very excited to see what’s coming next month in Robin War.