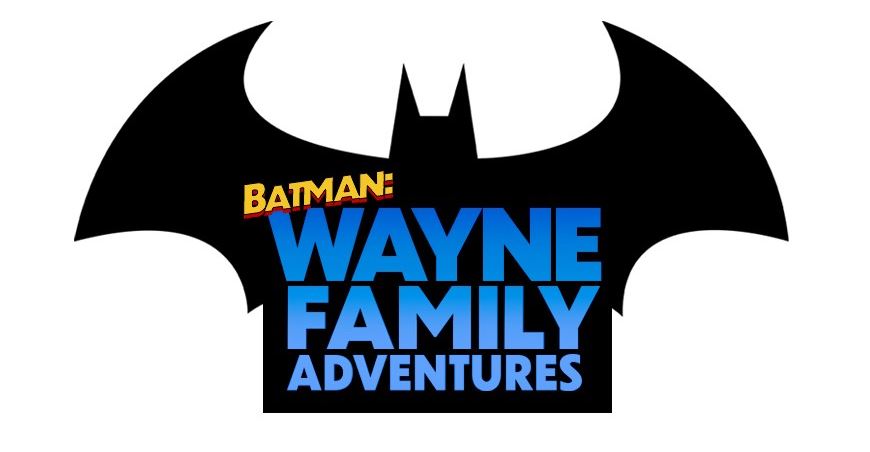 Coming off of a high of turkey and gravy, Steph and Ian find a few moments to sit at their computers to chat about the Batman: Wayne Family Adventures #11-14. Warning: Spoilers be ahead.

Steph: IAN!! Long time no chat (about Webtoons, at least). How was your Thanksgiving?

Ian: It was great! Spent time with family, cooked the turkey and gravy, played pool, all the good stuff. How about you?

Steph: Family, food, and relaxation. But now we’re back to regular Batman-ing, it’s time to talk about Wayne Family Adventures. We have FOUR weeks to catch up on! What did you think of Not It?

Ian: Not It was pretty darn hilarious! I loved the way all of the Batkids bickered and bargained to avoid having to fight the D-list or lower villains! What was your favorite excuse in the comic?

Steph: I loved Steph’s flip flop, making a meal out of avoiding Kiteman, but then preferring him to Condiment King. 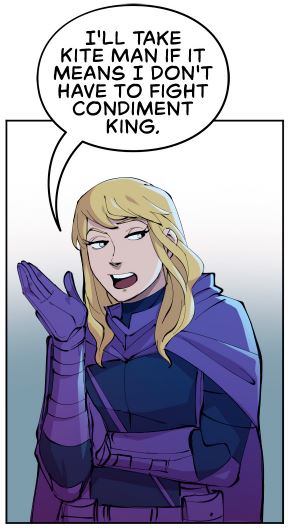 Ian: Who wouldn’t, though? 🙂 I was a bit bummed that Steph didn’t take Baffler, since her dad being a Riddler knockoff would have made him easy to beat for her. (also, Baffler was highlighted as an opponent for Steph in Tim Seeley’s one-shot comic Gotham Nights #12, “Five Little Robins”).

Steph: Well then, it’s Tim’s turn. I loved the way Bruce called Tim out in such a “Dad” way. It’s totally something I would do. What was your favorite? 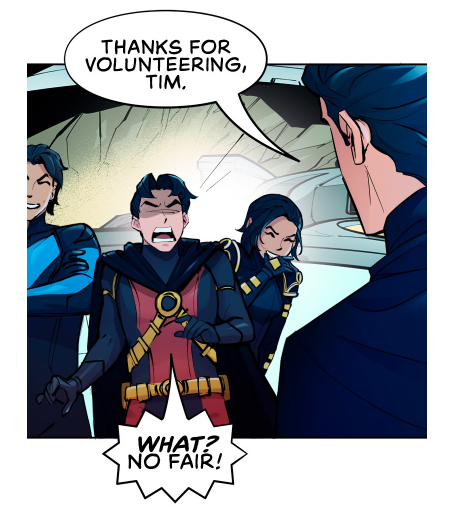 Ian: Yup. Bruce’s little tag at the end made the comic a lot funnier! I mostly loved the way the kids ribbed each other after they all got their villains. And Steph, of course, with her overdramatic speech about hating Kite Man.

Steph: I did love Cass’s and Dick’s stare down. She definitely got off easy. 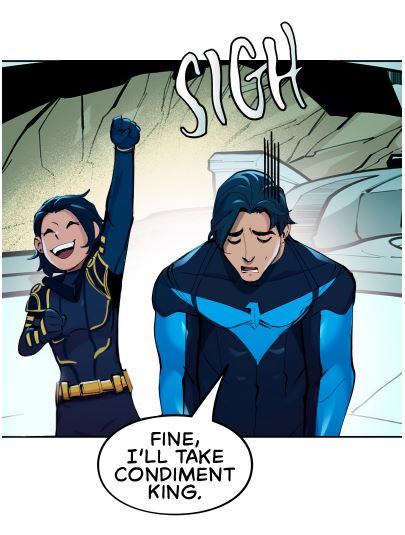 Ian: should have had a rock-paper-scissors contest there.

Steph: For sure. I would hope this kind of thing really does happen because if there is as much crime in Gotham as we’re led to believe, and there are this many (and more) Bat people, a rock-paper-scissors situation is bound to happen.

Ian: I mean, one thinks that the Bat-Family would also have a “dibs” system – where they’ve gotten really good at fighting a specific villain or type of villain.

Steph: Or maybe they have a “Villain” bingo going on. What did you think of Escalation? This was possibly my least favorite of the four, not because it’s bad or poorly written, but because it didn’t seem quite in character for either person. Damian was way too much of a jerk and Tim was too much of a pushover. At first. 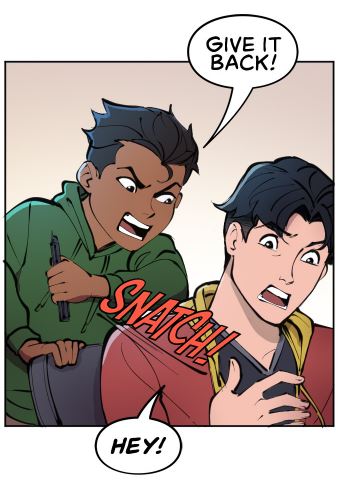 Ian: It’s taking a very common point of contention – Tim vs. Damian – and playing it for laughs. The series gets a bit of pushback as being too reliant on Fanon (fan conceptions of what canon characters are like when they aren’t having adventures), such as having Tim love coffee and never sleeping – but I think when you’re writing a slice of life comedy comic, that’s what you should really lean on, similar to a sitcom. It definitely wasn’t my favorite of the four we’re reviewing today, but I liked it pretty well.

Steph: I did enjoy the escalation of pranks and the length to which each went to torture the other. Glitter Robin is now my favorite. Did you have a favorite prank? 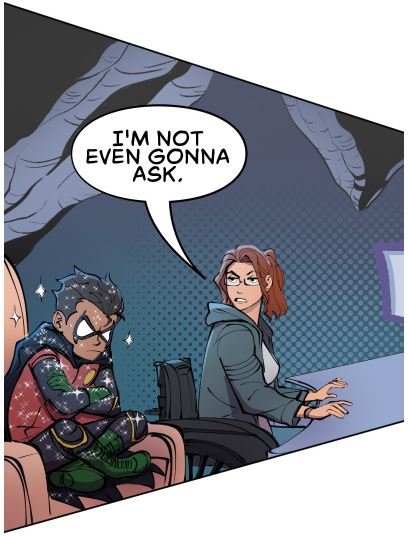 Ian: I kind of love the laser bedroom – and really want to know how Tim set it up, and what would happen if Damian blocked one of the beams! 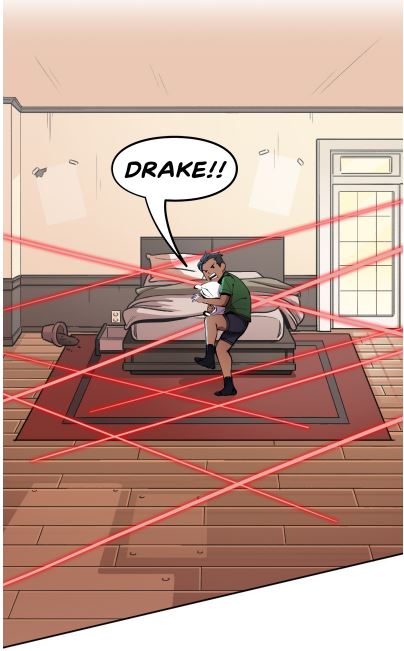 Steph: Me too!! I did love that Batman put an end to not only the pranks, but the comic as well. That was a tiny 4th wall break I enjoyed. I do have to say that the most realistic thing about this one was the final gag where Bruce threatens them with Alfred.

Ian: I loved that too, though it makes me miss Alfred so much in main comics.

Steph: True facts. Stupid Traditions was really cute. I can’t believe Damian is only eight at the beginning of this comic! How old was he when he moves in with Bruce in the main continuity?

Ian: I think he was at least biologically ten, though the New 52 compressed five-year timeline made them invent weird accelerated aging technology to make it all work, though this is a Gotham that is much less dark than we are used to, so I don’t think we’d get exactly what happened in Batman and Son happening in the backstory to WFA.

Steph: That makes sense. I loved the artist’s gags in this one! I think I saw Damian got a pack of dynamite, a crossbow (from Helena?), and a whip from Selina. The artist also did a good job at showing Damian’s expressions, his sourness at the beginning coming from only Dick and Babs being at the party, and then his hope when he hears everyone else coming in. 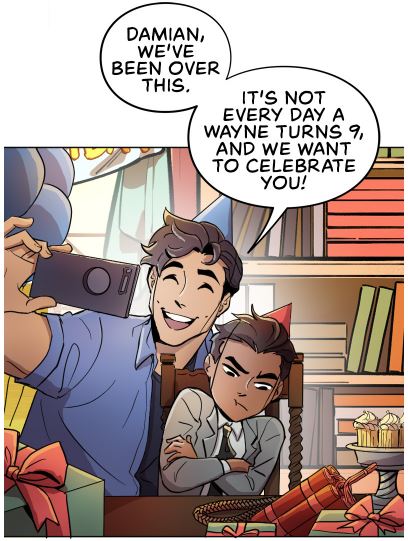 Ian: One thing I think a lot of writers don’t always remember to do with Damian is allowing those moments of vulnerability. I think you need to have the balance with his skills, his damaged upbringing, and his desperate desire to prove himself to his father and Dick.

Steph: For sure! He brings up his mother twice in this one, comparing his life then and now. I really loved it, and not just because this was a Damian episode…though that helped. Did you like this one?

Ian: I thought it was a pretty good piece, especially showing Bruce reaching out to Damian and his helplessness. There was some depth to the characterization of Bruce, too, which is often missed with the focus on the other Bat-Family members.

Steph: Do you think this dog is Titus, or will he stay “Murder King”? 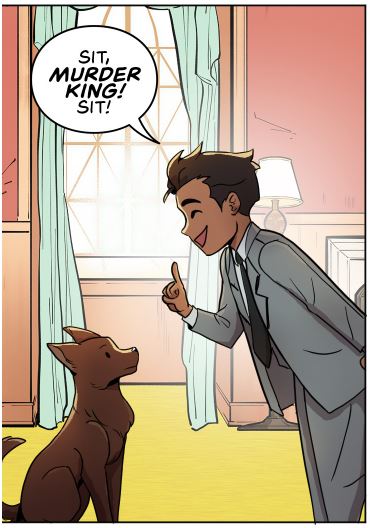 Ian: It doesn’t look quite right to be Titus, but this is a different world, so I could see him becoming Titus in the end.

Steph: And finally…Unaccompanied. This one made me a little mad. Can you guess why?

Ian: No! I thought it was pretty funny.

Steph: Because he doesn’t ask Selina to go!!! She’d be a perfect date! She might even be there already.

Ian: Ah, that is a very good point!

Steph: But yes, this was was pretty funny. I actually very much enjoyed it.

Ian: Have we seen Selina in this continuity directly? I know she gave Damian a present. But did she actually show up on-panel?

Steph: No…I have a Cat-dar. No Selina yet. But I am hopeful.

Steph: So, who was your favorite “guest” of Bruce’s?

Ian: People are saying all kinds of characters show up in the Thanksgiving strip coming up! I mean, you know I always plug for Steph, even though her reaction was only reported. 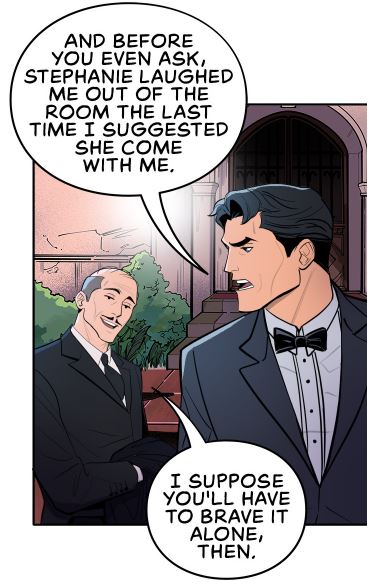 But all of them were really funny, from Jason’s attempts to get people to tell Bruce he should kill the Joker, to Cass and Dick’s acrobatic shenanigans. What about you? Which stood out to you especially?

Steph: It actually took me a couple of read-throughs to understand Jason’s, but when I got it it was really funny, though what I loved most about his was that he was wearing a casual jacket and a t-shirt. 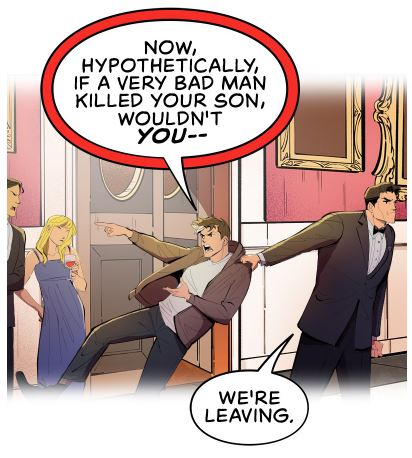 But Tim has to take it home for me. Though they explain it as “he’d been up for 36 hours” I can’t help but think that, as a fellow socialite, he maybe has had his fill of these galas as well. I mean, he didn’t become Robin because being a rich kid was fulfilling. But maybe I’m thinking too deeply on that one

Ian: Well, there’s a reason the fanon of Tim being always sleep-deprived and loving coffee is so beloved. It makes intuitive sense of his character circumstances and personality.

Steph: So random question then, who would you ask to the Gala? I feel like Kate or Helena would have been good choices.

Ian: If I were Bruce, I like your idea of Selina, though Kate would also work. If I were me, I’d ask Steph, and we’d ditch the party and go watch movies on the host’s tv. 🙂 What about you? In terms of if you were Bruce vs. yourself?

Steph: If I were Bruce, I’d ask Selina, and if I were me, I’d ask Selina. Cause she’s my favorite too. I think, overall, these were all fun episodes. I think you’re right, that the authors do rely on some fanon characterization, but to be fair, in the last five-plus years there haven’t been too many books that deal with the characters’ downtime, and the fans have to fill in the blanks somehow. I do love that the fanon comes from love and most of their characterization is in character…if that makes sense.

Ian: Completely agree. I don’t see another really viable way to make a weekly slice of life comedy webcomic if you don’t really lean into characterization, and fanon has a tendency to make it fairer because it means people have a familiarity with the characterizations being used from fanfic and blog posts and RP Twitter accounts.

Steph: I know we ask this every time, but what would you like to see/look forward to maybe seeing in this strip?

Ian: Well, I’d like to see Steph have something similar to Damian’s Birthday strip, or even the Escalation strip since that would give her a two-hander strip to get a bit more development than “the sassy blonde one”. Would also love to see Duke’s date a bit more, maybe that “she’s a villain” we pitched last time. 🙂 What about you?

Steph: Well, Selina of course, but I would love to see other people we haven’t seen yet like the aforementioned Kate and Helena. It would be interesting to see how Azrael would fit in in the daytime. It is interesting that the comic started with introducing Duke, but he hasn’t been a large part of the series yet, though he has gotten the only “arc” stories so far. I wonder if they’ll start bringing him in more regularly soon.

Editor’s Note: You can find the Batman: Wayne Family Adventures #11-14 exclusively on the Webtoon platform.