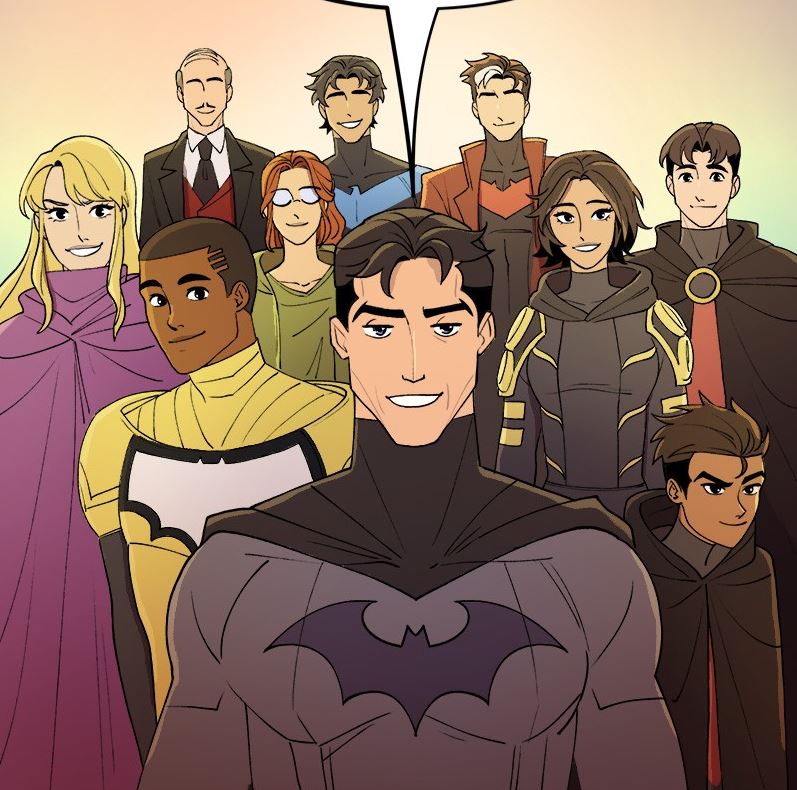 Steph: Ian…are you ready…for the emotional roller coaster that is the next three episodes of Wayne Family Adventures?

Ian: I dunno if I’m ready! These episodes promise to take us to some intense places! (kidding, I am totally ready!)

How did you react to how things played out at the beginning? With Tim Drake’s broken rebreather. I had practical and emotional reactions, and they were different. 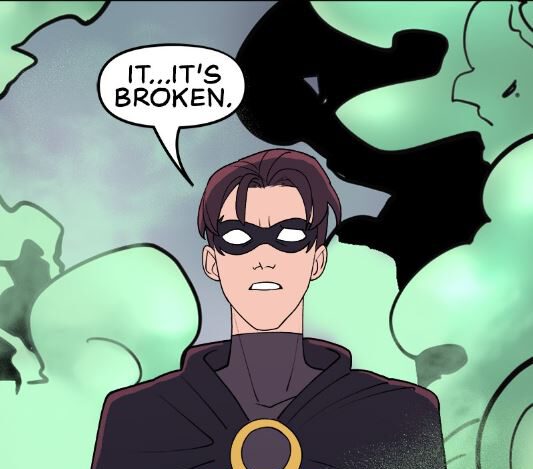 Ian: I thought it was very in character for Bruce Wayne to give Tim his own mask. I do think that Tim being the one whose gear failed, felt a bit off since he’s the kind of overly conscientious guy who would tend to double-check his gear all the time. I would have thought Cassandra Cain or Stephanie Brown, or even Dick Grayson might make more sense in these circumstances, but it’s not super important for the actual point of the strip.

Steph: Yes, the practical side of me agrees. It seemed odd for a) Tim’s equipment to be busted (though it could have happened in the fight) and b) for him not to immediately spring into action to do something else, like escape, find fresh air, or try to figure out how to turn off the gas. And, practically, it did seem odd that Bruce, who is 6’2″ and 210lb (according to Google) to make himself a dead weight for a 16-year-old boy to be responsible for. 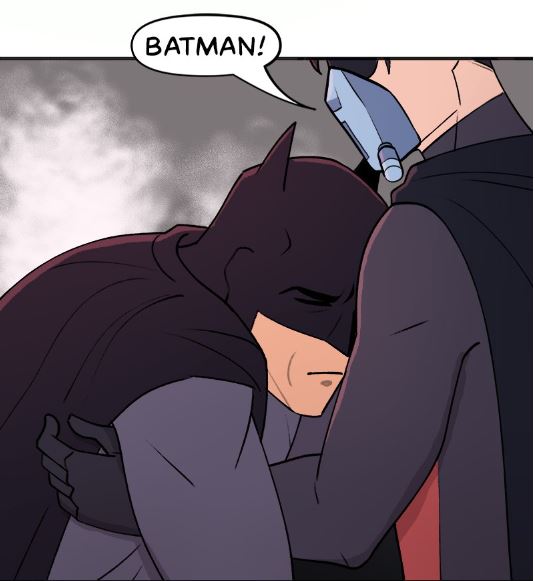 Steph: But, emotionally, of course, the impact of the shocked looked over the rebreather and Bruce’s immediate reaction to help his son were all on point.

What did you think of Scarecrow’s design here? 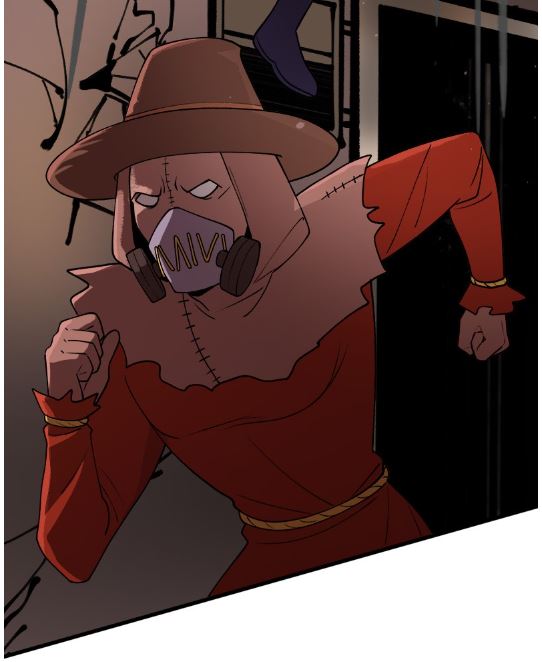 Ian: Isn’t it sort of Batman: The Animated Series inspired? It feels very “classic,” definitely not the Jorge Jimenez costume we saw in Fear State.

Steph: I thought it was interesting in its simplicity. It shied away from the grotesque and horrific and was even plainer than the BTAS face. It honestly looked like he just had some pantyhose and a few stitches around his mouth, which was fine. It was always odd to me that Jonathan Crane could see with a straw-stuffed burlap sack on his head.

Ian: What did you think of the way Batman “beat” Scarecrow through the power of, of course, the Wayne Family in this Adventure? 😉

Steph: Oh man, yes, the next episode, #56 Why We Fight Part 2, had me thinking. I wrote all kinds of notes.
So, obviously, Crane isn’t really talking to Bruce. This is all in his head.

Steph: The fear presented to him is that he can’t defeat the baddies, no matter how hard he tries, and he can’t ever bring his parents back. Bruce denies these are his fears, but he wouldn’t have seen them if there wasn’t something to them. Do you think, maybe deep down, that is what he had been trying to do at one point? Stop crime and bring his parents back? That does sound like something a child would do or something you would think in the first stages of grief.

Ian: Batman is, of course, famously frozen (some even argue “dead”) at the moment his parents were killed.

Ian: If he really moved on, he wouldn’t be Batman – something I really adored about how Chip Zdarsky pushed that element of Bruce’s character in the recently concluded and brilliant miniseries Batman: The Knight. Bruce consciously refuses to heal because he wants to be Batman so badly to try to fix the problem that created him. I think that Wayne Family Adventures doesn’t lean on that element of Bruce nearly as hard because he’s much better adjusted.

Ian: But there’s still that terrible drive that pokes its way through, in episodes like when he tells Steph why he does what he does in “Belonging Part 2.”

Steph: This Batman has definitely grown from what he once was. I think it’s fair to say that he would want his parents to be proud of him. I think his vow was to avenge his parents’ death, so they are intricate to his motivation, but he has let them go.

As for who his family is now, I would imagine that when Batman started alone (or at least, just with Alfred Pennyworth), it might have been harder to visualize why he was fighting. But with every new member of the Bat-Family, there was another face to fight for. Another life that he knew personally was being fought for. A family that is so strong now; even though Bruce is captured by the fear toxin, his family’s love is strong enough to pull him out. 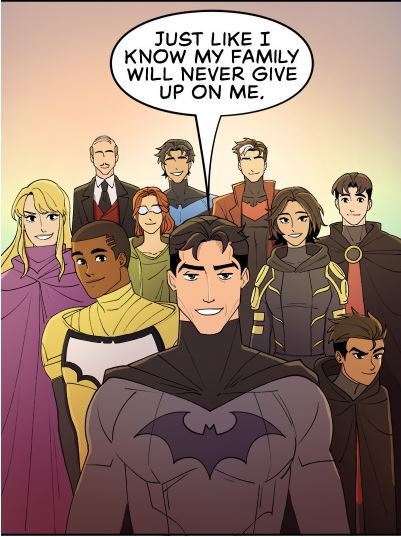 Ian: Absolutely. I think that this really speaks to why Wayne Family Adventures is so popular – if you check out the comments sections, there are so many fans who are touched by the different characters. There’s a character for everyone – and it’s not always who you might think!

I do wish that Warner Brothers would pick up on this and, you know, greenlight some Batman movies that leverage this strength of the property!

Steph: Oh man, that would be great. “A Day in the life of the Bat-Family: The Movie! The Animation” How did you feel overall about the first serious story of the season?

Ian: I thought it was a great one. Because the focus is on the family, we don’t always get a focus on Bruce himself, so it’s good to see so much love and attention given to the foundation of that family, Bruce himself. And this is definitely a Bruce I love – one who sacrifices his own safety for his kids and ends with a very warm hug with Tim!

Steph: HUGS! Not enough of those in comics, though I have loved the Bruce and Tim stuff we’ve been getting in the main comics lately. So, last but not least, episode #57, Picture Day. This one was pretty cute. And another daddy Bruce episode is the best.

Ian: This was almost a classic Peanuts-style cartoon. With Damian Wayne taking the Charlie Brown or Linus role.

Steph: I love when Damian’s non-assassin side comes out. Like, he can kill you where you stand, but also he wants a good picture on school picture day.

Ian: I think it would really be nice to see some Bat-Family (rather than Super-Sons) related to Damian’s normal life stuff. I know that his current status quo doesn’t really lend itself to that – since he owns an island and is demon-possessed or something, but I think showing Damian growing to care for people outside of the superhero community is really important. If you don’t develop those relationships, then you don’t develop a true sense of responsibility to protect those people. At least, that’s my take.

Steph: Totally agree. I love his tension, for lack of a better word, with Duke Thomas, but it’s very sibling-y. 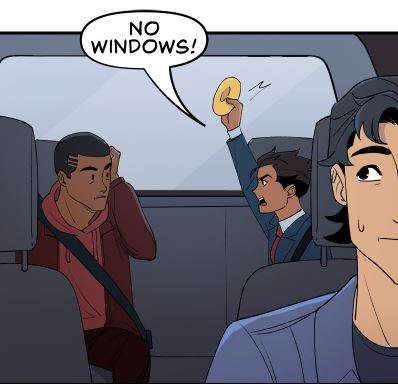 Ian: Duke and Damian as siblings is definitely an underrated dynamic, and I’m very glad to get it here in Wayne Family Adventures.

Steph: Of course, the real questions…what is Cass eating for breakfast? Pudding? 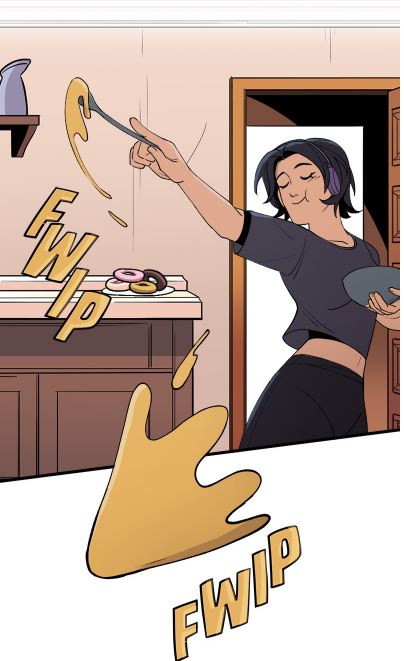 Ian: It was pretty hilarious to see her dancing with her food! Very in character!

Ian: Brothers looking out for brothers!

Steph: So, here’s one more question about something that I just noticed. The boy that ends up dowsing Damian has red hair and freckles…could that be Collin? 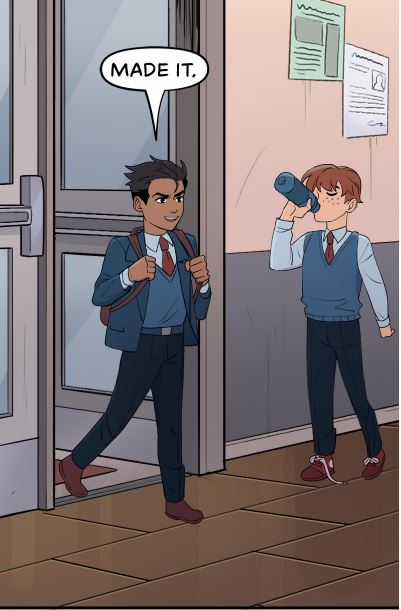 Ian: It might be! The WFA team does seem like they would pull Collin out to put in that kind of role!

Steph: And, of course, the end is too cute, with Bruce loving any picture of Damian, no matter what this hair looks like. Though…at a school for rich people, I feel like they could have at least given him a dry blazer!🤣 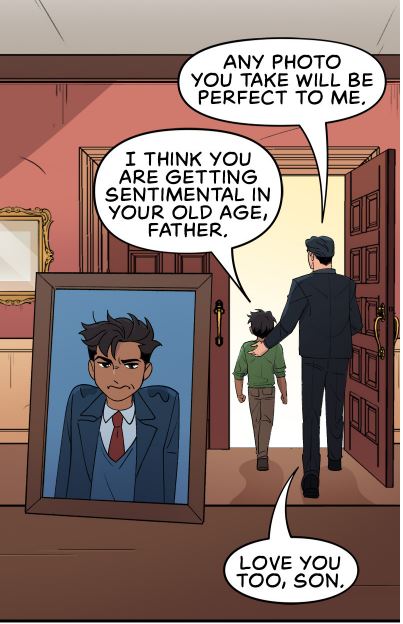 Ian: Bruce affirming Damian is exactly how we want to see things going!

Steph: This was a great three weeks of Bat-dad comics, wouldn’t you say?

Ian: For sure! Starting off our second leg of the season on a strong Bat-foot! I do think the art continues to be much more clearly simplified but still quite appealing.

Steph: Agreed. Well, talk to you soon about the next three weeks!

Editor’s Note: You can find Batman: Wayne Family Adventures #55-57 and all other past chapters exclusively on the Webtoon platform. You can find all other reviews of the series here at The Batman Universe.