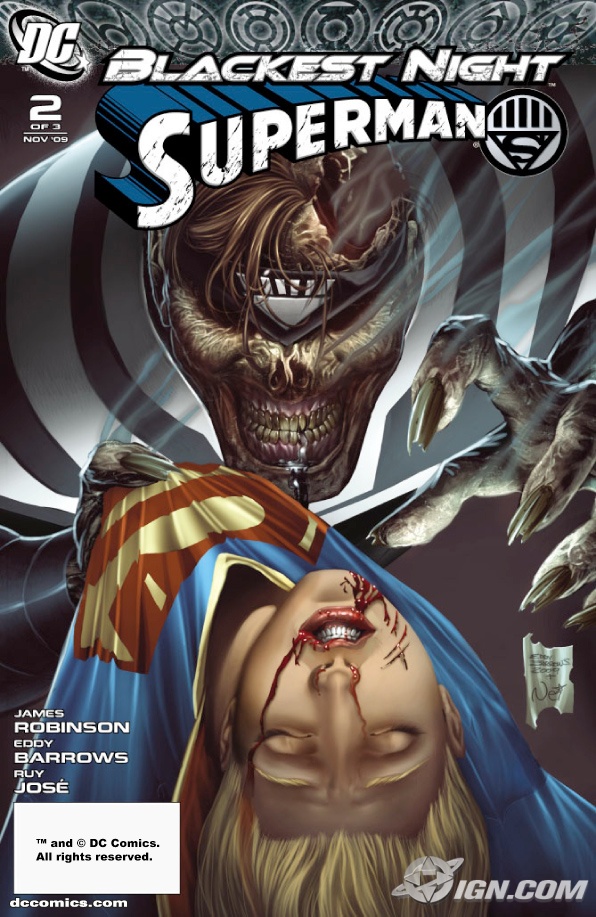 Hopefully you’ve all had a chance to read Blackest Night Batman and Superman parts two of three. My aim here is not to recap the issues but to engage in a little friendly competition between two of DC’s greatest heroes as they tangle with the latest threat to the DC universe, the Black Lanterns! In round one of this competition I divided the battle into four parts. Cover Art, Reveals, Raw Emotional Impact and Supporting Cast and Villains. As we complete the second issue of each I’ve added, Cliffhangers, as a way of rounding out the competition. 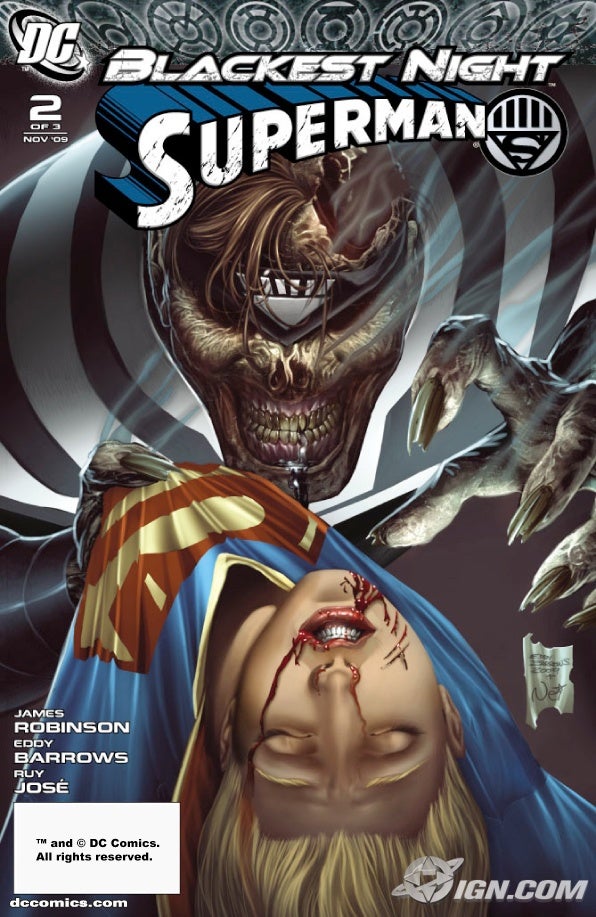 The cover of Blackest Night Batman #2 by Andy Kubert and Alex Sinclair pictured here reminded me of the classic Bill Murray comedy, “Ghostbusters”. While the movie made you howl with laughter this scene is of a grimmer nature. Here we see Damian, Dick and Tim unleashing torrents of hell fire from their weapons as they are besieged by legions of demonic Black Lanterns. Our heroes’ bodies are aglow with weapons fire as they stand amidst the gathering gloom and the city topples around them. Their desperate faces grimace with fear and rage knowing that this could be their last stand.

Over on Blackest Night Superman #2, we have a cover by Eddy Barrows and Nei Ruffino. This cover too could come from some classic horror movie but perhaps of a much earlier era. Pictured here we have the standard tableau of the vulnerable heroine held in the clutches of the dastardly villain. It looks like any movie poster from a vampire flick of the 20’s or 30’s where the young and innocent female is about to be violated by a nightmarish monster. Only in this case the young lady is Kara, also known as Supergirl, and the monster is her once dead father out to kill her and destroy Kandor.

-While both covers depict and evince the horror of the monster movie genre I’m giving the nod to Batman. The Superman cover, while classic, has been done a million times. The Batman cover is dynamic and lends itself to famous last stand movies like the Alamo or Zulu where the odds were insurmountable.

In this section I’m looking for clues to see how the overall Blackest Night storyline is to proceed. In Blackest Night #3, Ray Palmer, the Atom, theorized that the Black Lanterns’ power rings are made possible by some amalgamation of dark matter coupled with microscopic worm holes that channel energy. A pretty significant step, whether it is true remains to be seen. In these two books unfortunately we don’t learn too much. Zombie Lanterns are shredded and re-form in both books and the heroes realize quickly that their weapons and powers are near useless. At least Supergirl confirms what Green Lantern Kyle Rayner comes to know that their loved ones would never speak to them or acts like their current evil incarnations (Green Lantern Corps #40).

-When there isn’t much to go on from each issue I’m not going to split hairs and force a winner.

Certainly there is no shortage of emotional impact in either book. In the Batman book we find Priests, Cops, Firefighters, and Civilians are being torn to shreds by the Black Lanterns. Commissioner Gordon and his daughter Barbara are trapped together in seemingly their last moment as they try to blast their way free in utter futility. As this happens, the Black Lanterns taunt their victims with bitter memories and make a mockery of their lives and loves. Red Robin comes to the rescue with low altitude high speed pass that temporarily decimates the Black Lanterns. But the grotesque icing on the cake is when Tim and Dick are confronted by their dead parents, the Drakes and the Graysons.

Over in Blackest Night Superman Black Lantern Kal-L continues to provoke Superman into rash action while dead Earth 2 Lois holds Ma Kent hostage. Kal-L orders Lois to kill Ma Kent and this is only narrowly averted by the actions of Suberboy Conner Kent. The most obvious contrast in raw emotion between the two books comes from the manipulations of the dead Psycho Pirate. Suddenly, the citizens of Smallville are turned against each other or in one particular frame forced to kiss each other in a decidedly non heterosexual way!

-If only Pa Kent was resurrected as a Black Lantern! Now, that would have been horrific. I have no doubt that it would have pushed Superman right over the edge and I would have loved to see that. Unfortunately, this was an opportunity missed. That act would have only been superseded by seeing Bruce Wayne rise from the grave. (Hmmm, or maybe not?) The combination of the Drakes and the Graysons trumps Supergirl’s newly risen father since he is not a character that carries the same emotional impact in the DC universe.

Much of the characters we saw in the first issues of each series return in the second. In Batman, Red Robin takes on a larger role however briefly. The Drakes and Graysons get some speaking roles but they are regulated to the end of the issue. Deadman reanimates a paralyzed Barbara Gordon and they all pile into Red Robins jet powered flying bus.

But over in Blackest Night Superman #2 we have Psycho Pirate! This addition was a real hoot. Not only does he turn staid and sweet Smallville into a maelstrom of emotion he does it with hilarious and bold results not often seen in comics. We also get to see Connor Kent turn on Big Blue and lastly it’s the totally b**chin’ Martha Kent telling us, “it’s on!”

Over in Blackest Night Batman our heroes have crash landed in a cemetery. No crazy citizenry to contend with unless we include the ones buried below and that is not out of the question. No, their battle seems to be isolated to the graveyard. Who knows what mayhem will go on in Gotham without the heroes around? The Graysons and the Drakes should take front and center here. Will Tim and Dick turn their fry-o-laters on their own parents?

-This was a tough call. Dick Grayson’s Batman seems to have his head screwed on right but Damian’s Robin and Tim Drake seem a little uneasy. I don’t think the Gordon’s will be too much help either. Deadman? We’ll see. It looks like the new Batman could be on his own and that will be toughest test for our hero.

Similarly, Superman is on his own unless we count Ma Kent and the recovering Krypto. As much as I like to see Batman battle it out in a rain soaked and darkened graveyard I am really jonesing to see Martha Kent “git it on.” The whole town spinning out of control with Psycho Pirate and Supes battling two super powered antagonists is too much to ignore.