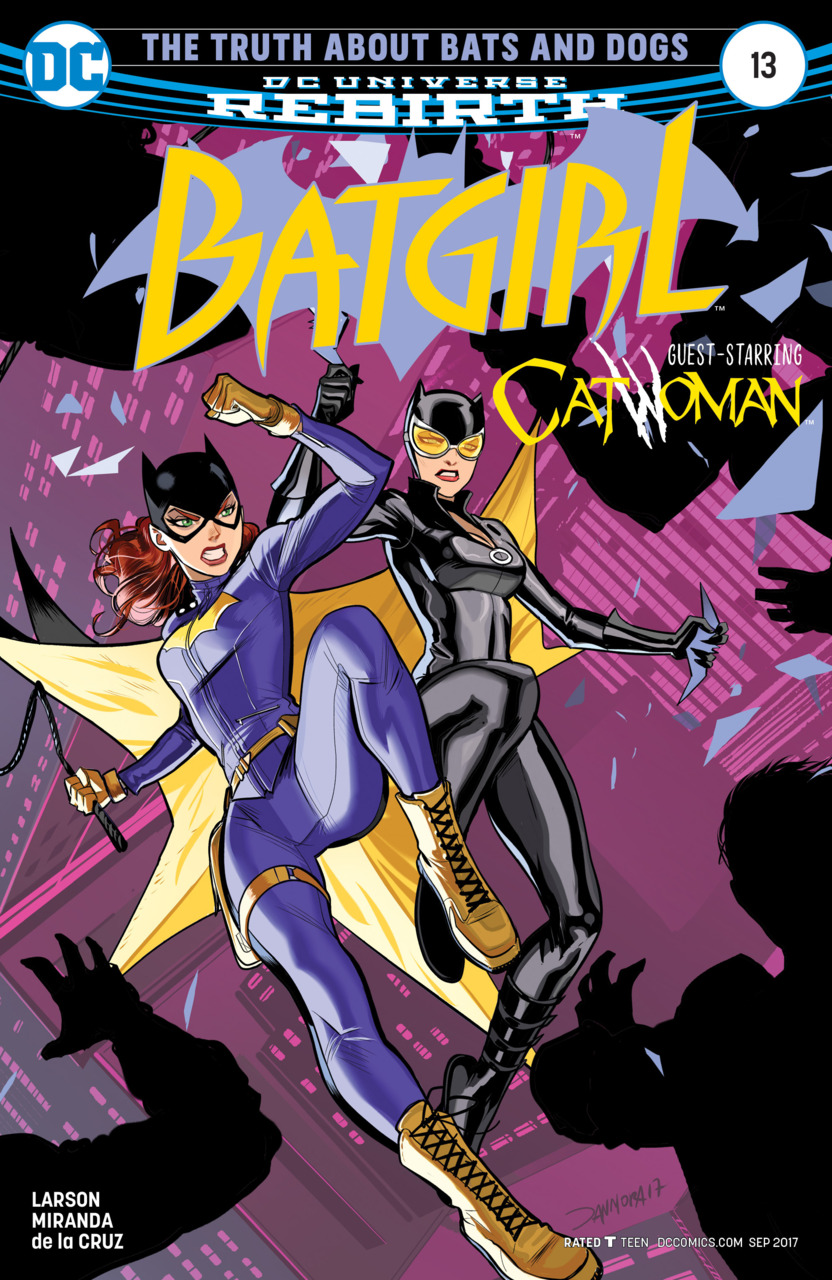 In Brief: Batgirl and Catwoman team up with Babs’s student Esme to track down some missing pets.

Summary (Spoilers): Esme, the prodigy student in Babs’s coding workshop, opens the issue narrating her search for Rookie, a celebrity dog on Pixtagraph. Batgirl swoops in to rescue her from a fairly nasty looking gang of bullies, and the two team up. On their way out of the warehouse, Batgirl sees Catwoman, and swings down with Esme on her back. Though initially Batgirl and Catwoman fight, they discover they’re both looking for missing animals – Batgirl and Esme for Rookie, and Catwoman for Isis, her cat. The trio uses Catwoman’s other cat friends and their sense of smell to find the lair of Velvet Tiger, who has stolen the two celebrity animals. The villain sics her leopard themed henchvillains on Batgirl and Catwoman, and Esme quickly uses a toy football as a false grenade to give her friends an edge against superior numbers.  The other animals Tiger has stolen assist our animal-themed heroes with the capture, and Catwoman splits with Isis when the police arrive. Batgirl takes Esme home, and makes her promise to obey her mother and not seek out more adventures.

In Depth: Inaki Miranda’s art for this one-shot proves serviceable, but inconsistent – Esme herself is very appealing, but Batgirl and Catwoman often have quite unappealing faces and awkward body language and proportions. Nothing here descends to the utter cheap ugliness of Miranda’s issue for Birds of Prey in 2010 (the finale of Death of Oracle), but it’s not nearly as polished as their issues of Catwoman at the end of the new 52, either. The choice to use a lot of in-panel transitions rather than gutters between discrete actions is often confusing – though I think bold layout design should be applauded, the choices here often obscure clarity instead of open new storytelling possibilities. The detail of Catwoman’s glasses functioning as a heads up display was quite positive, taking advantage of technology that we don’t often see used as part of superhero costumes, despite its definitely usefulness. In fact, Catwoman seems to draw Miranda’s best work out, as small insert panels of Catwoman using her claws to cut circles in glass are efficient, attractive storytelling devices, instead of the confusing gutterless panel transitions we see elsewhere. Eva De La Cruz’s colors have some very interesting choices – more textures than Cris Peter last issue, and way, way more dynamic contrast than Mat Lopes, the main colorist for the book.

Hope Larson’s writing unfortunately does not lift the inconsistent art out of the realm of competent but forgettable. Instead of attempting to fit Catwoman and Batgirl’s relationship into a wider continuity of their histories together and with mutual friends, she has the two start with the most cliched fight that breaks up when they realize they must team up together. While the Benson sisters used the same trope in this month’s Batgirl and the Birds of Prey, they did set the relationships in the wider context of what’s happening in The Batman Universe. The jokes about Catwoman having cats as her best friend, and the constant fake-pop-culture references like Pixtagraph lend the whole issue an air of shallowness that doesn’t sit well with characters as durable as Catwoman (75 years) and Batgirl (50 years). Add to that the noble but saccharine ode to mothers at the end of the story, and the piece comes off as more of an after-school special, teaching young kids moral lessons, rather than a story expressing a complicated attempt to grapple with the themes of its characters. One could argue that preaching is grappling with moral themes – but it’s not very good storytelling.

The caption in the final panel promises the Summer of Lies, the great Dick and Babs reunion (now that both heroes are single again), but after the fairly uninspired romances and weightless one-shots of Larson’s run, this reviewer is unfortunately not terribly hyped for this arc.

Pick up/Pass? The “lesson of the week” narrative structure makes this issue less solid than previous stories. It will likely read as a fun diversion in trades between stronger issues.

In Conclusion: A cute but ultimately forgettable story that doesn’t explore the potential depth of its characters.