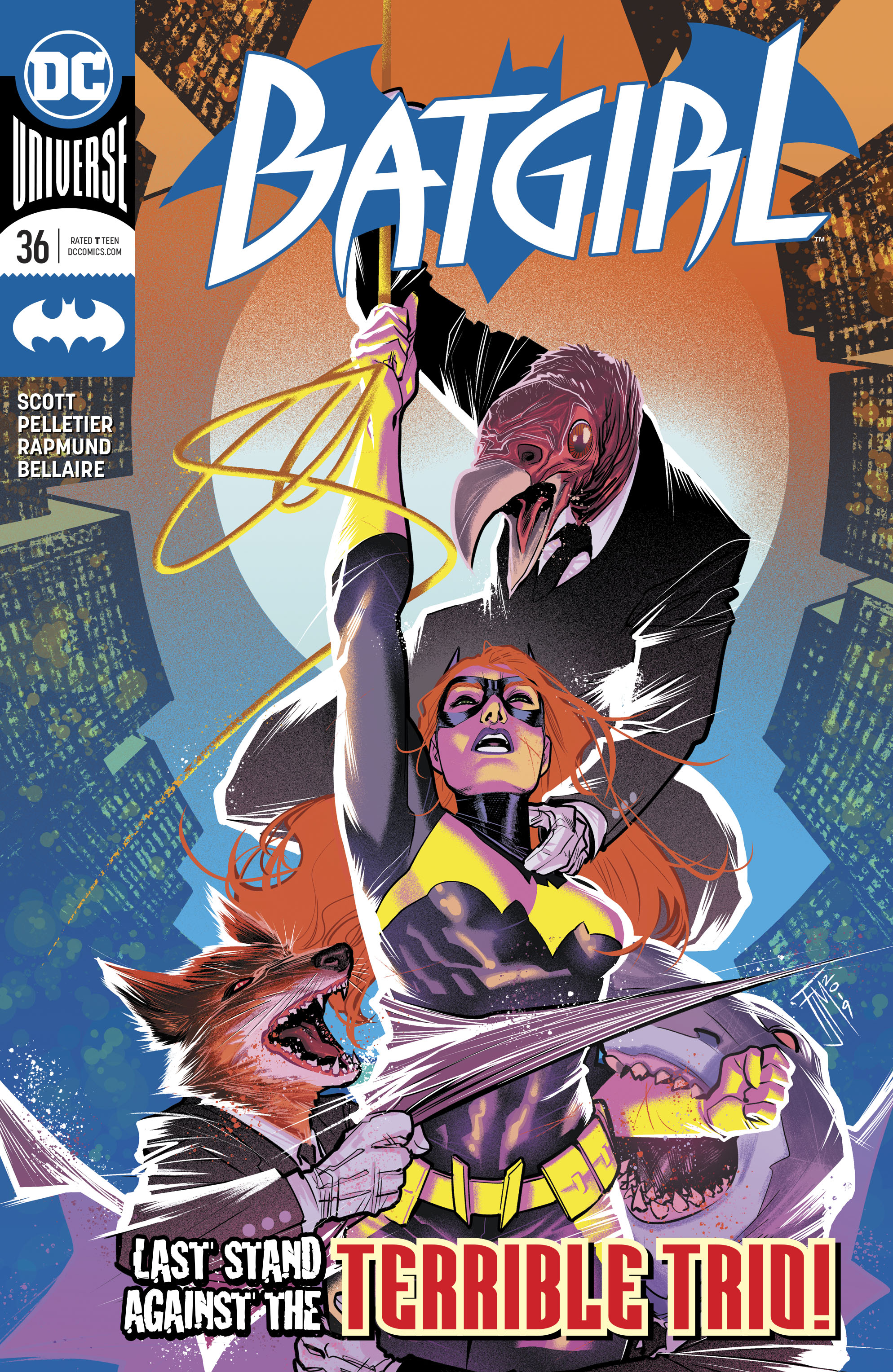 Overview: Batgirl has to fight her way out of the Terrible Trio’s burning club as this story arc comes to a conclusion.

Synopsis (spoilers ahead): The issue picks up where the last one left off, with Batgirl trapped in the Terrible Trio’s nightclub as the club’s patrons panic. Batgirl stands over the fallen body of Shark before vaulting past Fox and Vulture and then tries to free the patrons of the club by cutting through the metal bars on the door with the torch from her belt, only to find a throwing knife in her shoulder courtesy of Vulture. Vulture is trying to stop Batgirl since she does not want any witnesses to the Trio’s failed attempt at killing Batgirl which would be perceived as weakness.

Batgirl and Vulture fight, only to have their struggle ended by Fox, who hits Vulture from behind after realizing that Batgirl is his only way out of a burning building. Batgirl cuts through the door and then goes back through the flames and pulls out the unconscious Vulture. Batgirl then tries to rescue the injured Shark, who pushes Batgirl out of the way before a fiery pile of rubble collapses on him.

Batgirl makes her way out of the club and then to the headquarters of Gotham Clean Energy where she learns from Alysia that she has been forced out of the company. Barbara then heads to Jason Bard’s apartment where she collects her things following her eviction before moving to a dingy new apartment in “the Narrows” and the issue ends with Batgirl looking forward to a new beginning.

Analysis: This is a quick issue that comes down to a single action sequence and a few pages of wrap-up. The face-off with Vulture and escape from the nightclub is well executed. The book does a good job of setting up the Vulture as the “boss fight” for this story arc and I think the payoff of Vulture’s betrayal at the hands of Fox feels natural even if it is a little predictable. I think that of the three characters, Fox is the only character that feels like he’s earned a return at some point, although with the impending creative changes that feels unlikely.

I enjoyed how Batgirl is characterized in this issue and how her focus throughout the nightclub sequence is on saving lives. That feels right for Babs, especially in the “I won’t kill you, but I do have to save you” moments with Vulture and Shark and it is a nice moment when her faith in people is rewarded by Shark, the most violent of the three from the previous issue, who sacrifices himself to push Batgirl out of the way of the rubble. Whether or not Shark actually perished has yet to be seen.

Where I think the issue suffers is after Batgirl defeats the Terrible Trio. There is a rushed feeling where writer Mairghread Scott seems to be quickly tying up loose threads before new series writer Cecil Castellucci takes over next issue. While I think it comes from a desire to give this run a sense of completion, I think in trying to wrap things up, there is a danger in negating what the writer has been building throughout her run.

Within a few pages, Scott has removed pretty much everything that she had set up. The supporting cast, Barbara’s day job and even her issues with her father have been waved away. I’m not opposed to shaking things up, but while I think Scott nailed Barbara’s character in the fight scene, in the wrapping up, she becomes oddly passive. While the positive tone the story feels like Batgirl, I don’t think that a strong character like Barbara would take these changes to her life lying down. Even in the limited space that the issue has to wrap things up, all it would have taken is a line or two about how Barbara will be looking into the company that has forced her out. That would have made all the difference. I think it’s interesting to take a character, strip away their support systems and see how they react, but to not have Barbara react in any meaningful way feels like a missed opportunity.

I’ve enjoyed Paul Pelletier’s art in this issue and I think he stages the action well.   I do remain a little confused as to whether or not the Terrible Trio are wearing masks or if they have actually animal heads and I wish the art had been a little clearer on that.

Final Thoughts: I liked this arc and I’m disappointed to see it wrap up so quickly. Scott has a good handle on Barbara Gordon and I hope this isn’t the last time we see her take on Batgirl and her corner of the Batman Universe.