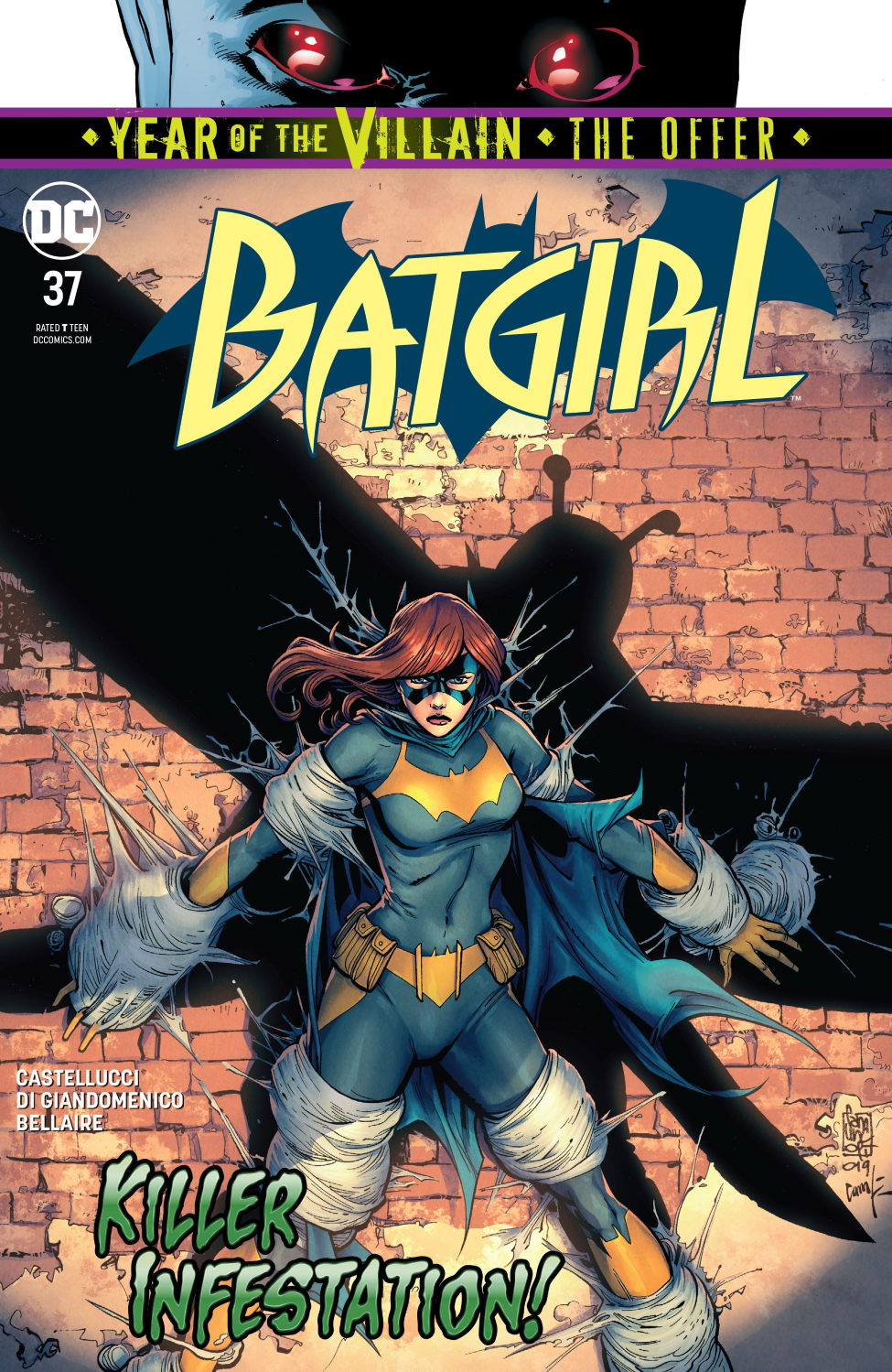 Overview: The Terrible Trio uncover a powerful android as Batgirl faces off against Killer Moth.

Synopsis (spoilers ahead): The story opens with the Terrible Trio, complete with a brand new “Shark” entering a cave in the Blue Ridge Mountains, being led by Vulture who states that she has a way to “get them back on their feet”. The trio makes their way to a cave filled with advanced technology.

As they walk through the advance tech they come across a female android suspended from wires and cables which activates and asks for a password. The Trio are unable to come up with an answer to the machine’s question as the machine begins to advance on the Trio.

Meanwhile, Killer Moth flies through the Gotham night pulling Batgirl behind him on a rope.  The two fight mid-air with Batgirl trying to fire a taser gun at Moth who responds by firing a bolo at Batgirl which she the fries using a feature on her suit and the two continue to fight.

At Congresswoman Alejo’s headquarters, Jason Bard makes yet another call to Barbara that goes unanswered and then invites Izzy out to see a band with the spare ticket that was meant for Barbara.  While at the bar, it’s pointed out to Jason how often he mentions Barbara, forcing him to admit that he has feelings for her.

Batgirl and Killer Moth continue to fight on the street, with Batgirl’s arsenal running low and Killer Moth talking about how killing Batgirl will get an unknown party’s attention.  Killer Moth unleashes artificial “moths” which attack and begin to surround and electrify Batgirl which then causes the floor to collapse as she falls into the abyss below.

The Terrible Trio continue to fail at guessing the machine’s password when a drone arrives and projects an image of a cloaked Lex Luthor who gives the machine the correct password, which is the machine’s name: Oracle.

Analysis: This issue signals the beginning for writer Cecil Castellucci, who really seems to try to be picking up right where previous writer Mairghread Scott was at, which I think she does with varying degrees of success.

The first thing that struck me about this issue is how the Terrible Trio continues to be a driving force in the book.   This seems at odds with the previous issue, where Fox betrayed Vulture and Shark was presumably killed, and it seemed natural that the Trio would be benched for at least a few issues if not longer. I expected nothing more than a throwaway line about how the new Shark is Fox’s cousin and some lip service to how the Trio have to rebuild to tie that up.

Killer Moth’s presence in the book is welcome.  Batgirl doesn’t really have a terribly strong rogues gallery of her own, so I like when a villain with a genuine connection to Batgirl makes its way into an issue.

I also like how Barbara is keeping track of her dwindling resources.  I like the idea that she is trying to continue as Batgirl after taking a financial hit. I think the idea of Barbara trying to balance her need for gadgets and tech against trying to make rent. This grounds Barbara in a way that is unique as compared to other members of the Bat-Family with Bruce’s unlimited resources. I hope that the solution isn’t Barbara getting a sudden windfall of cash.

As for the introduction of a new artificial intelligence named Oracle, the jury is still out since we don’t get more than a bare-bones introduction. I think the Oracle persona has, in general, been a concept that DC hasn’t figured out what to do with since Babs put her cowl back on. Giving the title to what looks to be a malevolent android is as good an idea as anything and it will be interesting to see how they execute this.

The art by Carmine Di Giandomenico was well executed, especially in the fight scenes with Killer Moth.

Final Thoughts: A decent, yet unremarkable first issue for this new storyline.