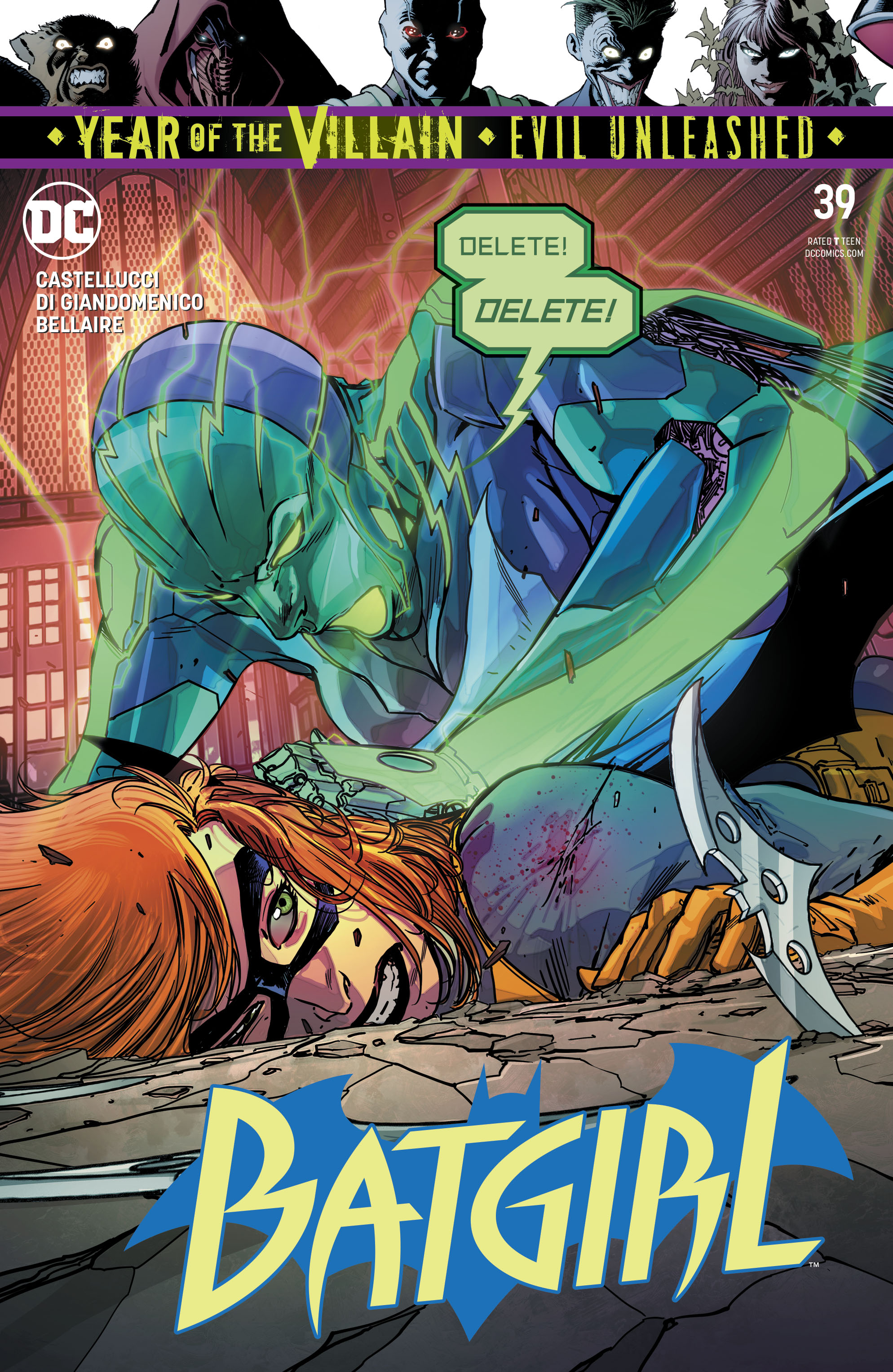 Overview: As Batgirl mourns what she thinks is the loss of her old life as Oracle, the Oracle entity puts its plan into motion.

Synopsis (spoilers ahead): The issue opens with Batgirl being tangled in Oracle’s wires as Oracle screams that Batgirl is deleted.  Batgirl manages to free herself and calls for the rest of the Bat-Family, who leap into action. The Terrible Trio then flee the scene, leaving Oracle surrounded and defeated, in what turns out to be a simulation that Oracle is running, which again finds Batgirl defeating her.  The Terrible Trio attempt to take the opportunity to sneak away from Oracle, who are then snared by Oracle’s wires, as Oracle tells the Trio to help her find a way to defeat Batgirl.

Batgirl returns to the clocktower she operated out of as Oracle, only to find that the Oracle program is gone.  The next day at work, Barbara finds herself distracted, mourning the loss of what was a vital part of her Oracle identity, and is sent with Jason Bard to Burnside by Congresswoman Alejo to meet with small business owners.   Meanwhile, the Trio suggest to Oracle that she goes after Burnside to hurt Batgirl.

Barbara and Jason walk through Burnside, speaking with small business owners all while she remembers all the places in the neighborhood she has helped as Batgirl.  The two then meet up with Frankie and then get caught in the rain and take cover under a bridge.  Babs and Jason share a quiet and awkward moment before parting ways, with Barbara thinking to herself how she never noticed how nice Jason’s eyes are.

Barbara tries calling her dad and leaves him a message while she sews up a new costume, which she then leaves to test out.  Batgirl proceeds to run across town and take care of various citizens of Gotham committing uncharacteristic acts of violence (referencing Justice League #25).  Meanwhile, Oracle sends out the Terrible Trio with vans filled with an accelerant and the issue ends with the neighborhood of Burnside on fire in the shape of a bat symbol.

Analysis: One of the strengths of the Batman mythos is that it has by far the greatest rogues gallery in all of comics, maybe followed by Spider-Man and the Flash and I think that getting to play with this deep bench of characters must be incredibly fun for the creative teams that get to tell these stories.   The drawback, I think, is that because all those great villains are more tied to Batman then anyone else, it makes it difficult to come up with villains that are tied to the other characters that make up Batman’s world.   So with that in mind, I understand the idea behind coming up with a villain that is born directly out of Batgirl’s past as Oracle as it gives Batgirl a deeply personal threat to deal with, which is a good idea.

That being said, Oracle is something of a letdown thus far. For what is supposed to be a cold and calculating artificial intelligence, she sure seems pretty mad, which I think needs more of an explanation but isn’t really a deal-breaker. The larger issue I have is that Oracle has had three issues now to present herself as some sort of a threat, and really has yet to make good on this promise.  This is a being of infinite knowledge who could out Barbara as Batgirl, mess with her life, wipe out her bank accounts, and her big plan so far is to send her flunkies to Burnside with matches and gasoline. It’s a boring and frankly baffling waste of what could be a terrifyingly powerful villain and if this is what we have in store from this character, I would expect that this iteration of Oracle is not destined to be one of Batgirl’s great villains.

As for the rest of the issue, Barbara is a character that I think works well when they mix in the super-heroics with her trying to balance in her personal life.  I like how the scenes of her with Jason in Burnside seem to act as Barbara trying to center herself after being unsettled by the loss of the Oracle program.   The moments of silence between Barbara and Jason also makes sense given their history.

I was sorry to see that Batgirl’s return to the more traditional cowl was so short-lived but artist Carmine Di Giandomenico’s style is a good match for the Sean Murphy redesign.

Final Thoughts: This writer has a knack for writing Barbara’s personal life but this new villain has, as of yet, not lived up to their potential.