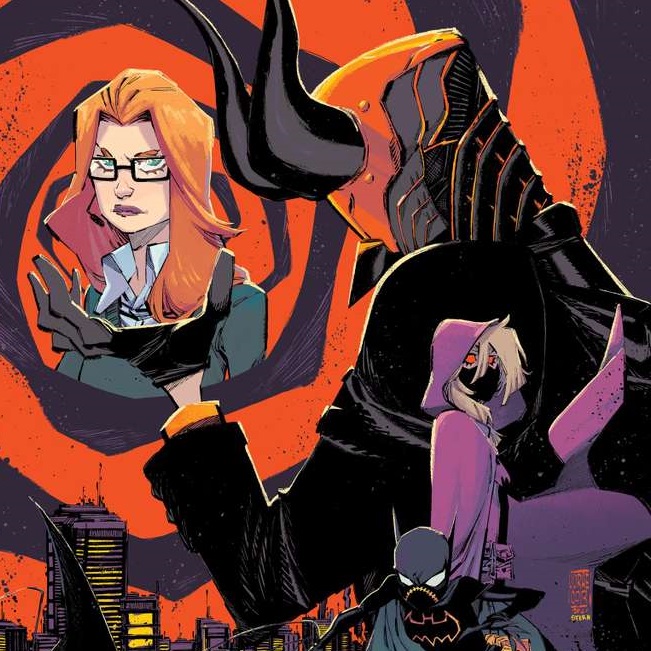 Overview: In Batgirls #5, the Batgirls find themselves in yet another precarious situation, with the Tutor and Spellbinder both enacting villainous schemes.

Synopsis (spoilers ahead): Batgirls #5 begins at the Hill, Gotham City, Stephanie and Cassandra tear through the streets as Batgirls, the Saints hot on their trail. The Bondo, the Batgirls’ new vehicle, narrowly avoids meeting the Saints van in a head-on collision, which ends with the two groups facing off, the Batgirls aided by the timely arrival of Barbara back in costume and kicking butt. The fight is short-lived and ends in the girls’ win– although the Saints are hardened fighters, they’re clearly not Batgirls.

Before departing, Barbara provides Assisi with a drive containing definitive proof of not only the death of Simon Saint but also the fact that the Saints have been played. Someone calling themselves Seer is pulling their strings. Their coding is unique–it’s the same person who framed one of the Batgirls as a killer. Oh, and Barbara will be keeping Assisi’s robot dog, FIDO-5, who she’s now adopted.

As the Batgirls peel out of the street, a live stream pops up on Stephanie’s phone, and she quickly updates the other girls on some concerning news: the Tutor escaped Dante’s house and is back to his old tricks, encouraging his followers to join him in flattening the city and rebuilding it in their own image.

Using Assisi’s robot dog programming, Barbara is able to triangulate the Tutor’s location, which she sends to the other two Batgirls alongside his background file.

Real name, Cody Kline. Average upbringing, a lifetime city resident. After graduating from Gotham Academy, he went on to study art over at Gotham University, and after finishing his B.A., was busted for some minor infractions. However, a few years ago, Cody suffered a psychotic break after one of the Scarecrow’s fear gas attacks. He was put on a 72-hour hold in Arkham Asylum, which is the exact place the tracking beacon is leading the Batgirls to.

The Asylum is now empty, bereft of inmates but still full of items and file cabinets since the relocation to the Tower, but Barbara advises the girls to be cautious regardless. She herself heads over to Dante’s house to do some more digging.

After entering the Asylum, the Batgirls discover Kline’s old file, abandoned there alongside many others. It turns out that the Tutor and Dante go way back, to Kline’s time in Arkham Asylum all those years ago.

Stephanie and Cassandra manage to warn Barbara, who is in the middle of snooping through Dante’s house. Deciding that the most prudent move would be to leave before she’s discovered, Barbara manages no more than a step before the voice of Dante interrupts. Cloaked as Spellbinder, Dante states that he insists she stay longer; she can’t leave after just arriving, they have some catching up to do.

Sensing something amiss, Cassandra states that she’ll go over after Barbara and heads up to the Asylum’s spired rooftop. Shocked at what she sees below, Cassandra informs Stephanie that they’re coming–practically every civilian in the Hill who responded to the Tutor’s call, dosed with fear gas.

Stephanie tells Cassandra that she’ll come help, but before she can her path outside of the file room in the Asylum is blocked by none other than the Tutor himself. Back out on the rooftops, Cassandra descends upon the civilians in an image of vengeance worthy of the symbol emblazoned across her chest.

Finding herself in her own predicament, Barbara doesn’t have the chance to do anything before Spellbinder commands her to make herself comfortable; the words cause her to fall over, unconscious at Spellbinder’s feet. To him, she’s a sleeping muse and the perfect subject for his next work.

Analysis: Secrets are being revealed to both heroes and villains in Batgirls #5, written by Becky Cloonan and Michael W Conrad. Joining them once again and as per usual are artist Jorge Corona and colorist Sarah Stern, who bring the fun and engaging story to life.

The Saints, ex-servants of the Magistrate and Simon Saint, now know the truth, thanks to Barbara Gordon: Seer has been manipulating all along and Simon Saint is truly dead. That isn’t the only hidden truth to come to light, however. The Tutor’s real name and past connecting him to Charles Dante later reveal that Dante is most definitely not as he appears. Unfortunately, knowledge of that comes a little too late, and sees Barbara trapped, Dante, now Spellbinder, her captor.

One of the highlights of Batgirls #5 was getting to see Barbara Gordon back in action, not as Oracle, but as Batgirl. She’s sassy and witty, and it was well worth the wait to finally see all three girls in action as Batgirl. Their easy banter and wholesome personalities are engaging and well-characterized and make it so that as the reader, you can’t help but root for them and cheer them on.

There are some moments where the suspending of critique is warranted; the Saints are handled with quite a bit of ease and Tutor’s civilian followers are, we can most likely bet, easily taken down by Cassandra. Additionally, it’s quite convenient that the Tutor’s file was just left, and easily findable, in the now-empty Arkham Asylum, alongside multiple others. Had this been a more serious storyline, I would have been left with a much bigger gripe to make. It isn’t, however, and similarly isn’t focused on presenting a perfect and high-octane plot, but rather one that is lighthearted and easy-to-ready, staying true to itself by blending humor and comradery. As mentioned in the previous review, a great option for new readers or younger audiences.

Ultimately, now we are left with one glaring question: what is Seer up to? Hopefully, those questions will be answered in the next issue and provide answers and a final resolution to the conflict and tension the story has been building up to!