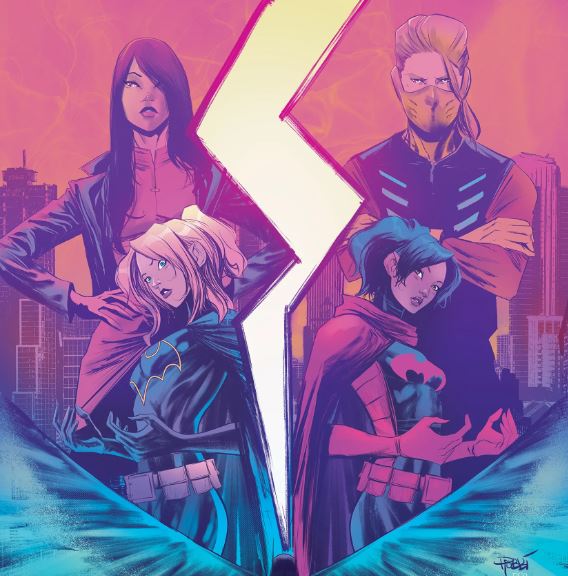 Overview: As summer turns to fall in Batgirls 2022 Annual, the Batgirls face changing circumstances – but they didn’t expect a body swap or kidnapping by their supervillain parents!

Synopsis (spoilers ahead): Batgirls 2022 Annual begins in Burnside, as Babs and Alysia look over Alysia’s new Boba Bar and Cafe, Babs promises the Batgirls’ help to get it up and running as fall begins.

Cass spends an afternoon at the Gotham Modern Museum, staring at the art, where she sees her mother, Lady Shiva, stalking her.

Steph and Kyle Mizoguchi, on another not-date in Gotham Hill Park, have a define-the-relationship conversation, discovering both of them are getting over their exes (Tim Drake and Olive Silverlock), but both want to continue their relationship, happy to take it real slow.

Though their days are spent exploring their lives, Steph, Cass, and Babs spend their nights fighting crime as only they can – rebuilding the Clock Tower, taking out foes like Kite Man, Calendar Man, and many more. Steph and Cass figure out that Babs is moving back to the Clock Tower, leaving them more space in the Loft. They mourn, but Babs assures them the Batgirls will always work together with a hug.

That night, Steph leads Cass to patrol the Mizoguchi’s neighborhood since Kyle told her about some robberies and discovers that Kyle and Maps’s neighbors might have been murdered, with chalk outlines on the floor. Cass insists they leave right away. On their way out, Steph saves a cat in a tree with two different eye colors, and the cat’s owner gives them a strange charm in payment.

At the Loft, Cass tells Steph she found a League of Assassins blade on the floor and prepares for war since she saw her mother earlier. Steph proposes they write down all their difficult feelings about their pasts and their families and only read them to each other when the time is right. They make a wish on the strange charm from the cat owner, but it lands on its edge, and they hit the hay. However, when they wake up, they find themselves in each other’s bodies!

In the Clock Tower, Babs, Steph, and Cass try to figure things out. Babs takes the charm to analyze while Steph and Cass meet with Officer Brooks about the murder in the Mizoguchi’s neighborhood – the victims were drug dealers, and their daughter saw Lady Shiva at the scene.

In the Batcave, Babs meets with Batman, and they work together on the problem.

Steph and Cass break up a violent gang fight as they chase the assassin, but as they try to capture him, Lady Shiva slays him with a thrown blade from a chopper, then takes Cassandra (actually Steph in Cass’s body) away to speak cryptically on the rooftops. Cass, in Steph’s body, is tricked by a gang member, drugged, and turned over to Cluemaster.

Analysis: After the last collaboration between Becky Cloonan and Michael W. Conrad, with Robbi Rodriguez on art (issues #7-8) was a pretty disappointing affair, with overloaded, sloppy narration and dialogue combined with Rodriguez’s typical loose and exaggerated anatomy and faces, I confess I wasn’t looking forward to Batgirls 2022 Annual. However, I’m very pleased that multiple readings of the issue reveal the kinds of details that really hit home emotionally and a fun 90s-style body-swap plot. In addition to using the greater length of the annual to really dig into the status quo for the Batgirls – showing them bonding with each other as well as pursuing individual activities and relationships, Cloonan and Conrad create several really nice emotional moments.

The relationship between Babs, Steph, and Cass is really highlighted here, showing the care each has for the other in multiple situations, from Babs moving away to Steph and Cass facing their lethal supervillain parents. Though the narration that Cloonan and Conrad have chosen as a signature for the series continues to be a tad over-egged, they do seem to have found a much better balance after the first couple of arcs really overdid it.

The dialogue also tends to work a lot better for the characters, with lines revealing emotions, motivations, and changing developments pretty well, not relying too much on cute or frenetic energy to move the story along. There’s a nice sense of autumn melancholy that doesn’t overwhelm cheerful moments like Steph and Kyle’s little scene together. An unexpectedly powerful moment appears between Babs and Bruce, where Batman confesses his feelings of guilt for the times he’s failed the Batgirls – something that hits home a lot harder after the frustratingly bungled moments in Batman vs. Robin #3.

Though the strange posing, anatomy, and frustratingly uneven facial expressions and features do mar this issue’s art, a lot of Robbi Rodriguez’s storytelling talents are on display. The opening montage of the Batgirls fighting crime on the hill is exciting and humorous, showcasing the Batgirls in their element, heroically. Rico Renzi’s colors, though still giving the Batgirls oddly super pink faces, provide artistic continuity between the various artists for the book, as well as giving it a really unique look that sets it apart from a lot of the other Bat-Books on the shelves.

Interior artist Rodriguez also provides the sole cover for this issue, a clever tableau of Shiva and Cluemaster standing behind Steph and Cass, caught in each other’s costumes, divided by a lightning bolt, while an ominous Batman spreads his cape beneath them all over the Clock Tower. While the piece has a lot of Rodriguez’s odd posing, it is very evocative and symbolically reflects the overall story inside pretty perfectly.

Though uneven art and still overly intrusive narration sometimes mar the impact of the story, a plethora of details, emotional beats, and creative character development packs a solid punch for the first Batgirls annual.