The Depths of Continuity in Batman #44 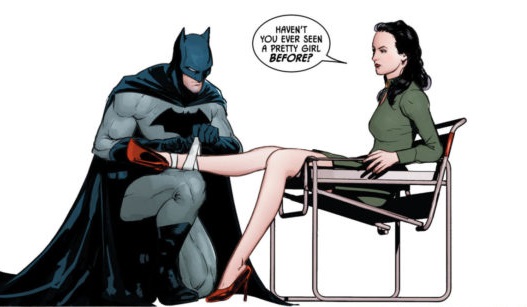 A few years ago, Tom King put some continuity easter eggs in Grayson #12. Donovan Grant did a great article here at The Batman Universe about the links from continuity. Once again, Tom King has given longtime fans some continuity goodness. In Batman #44, various scenes from Batman and Catwoman’s relationship are showcased. Let’s take a look at what pieces of history Tom King drew from.

Context: It’s Batman and Catwoman’s first published meeting. If you ever see Batman and Catwoman argue in Tom King’s run about if they met on a boat or the streets, this is why Batman always says “boat.” At the time Catwoman was called “The Cat” and didn’t wear a costume. Batman has caught her trying to rob a yacht.

What’s Changed: Very little. The dialogue and art add a more sexual suggestion to the scene. Thankfully, “Quiet or Papa spank” has been removed. I once showed that to Selina Kyle actress Camren Bicondova and she was horrified at Batman. Context: In this story, Catwoman hits her head and regains memories of her former life as a flight attendant. She retires from crime. A later Earth-2 story said she was lying.

What’s Changed: Some small dialogue stuff and Robin’s costume. Even though Tom King was able to bring the Golden Age back into continuity, the pixie boots and short pants are still gone. Context: Selina has retired from being Catwoman (due to the events of the previous flashback) and now works at a pet shop. People come and harass her about her criminal past and Batman steps in.

What’s Changed: Robin is either removed or simply off panel. As with the first flashback, the dialogue pacing and panel arrangement suggest more sexual tension. Removing Robin adds to that effect. Context: Catwoman has returned to her life of crime and is in her short-lived “mod suit”. Her goal here is to use a marriage proposal from Batman as leverage for giving up her life of crime. Her motivation is holy matrimony. Not the most feminist portrayal of her, but the sixties were a weird time.

What’s Changed: Batman is not wearing the “New Look” costume he had during this era. Context: This Bronze Age tale is a more traditional Batman vs. Catwoman story. No marriage or amnesia gimmicks.

What’s Changed: The chase is now outside instead of inside. This can be forgiven because as the first panel demonstrates, it started outdoors. Batman’s yellow oval is still missing. Context: It’s notable because it revealed that Catwoman knew Batman’s secret identity and never explained how. It created a continuity mess that lasted for years. Selina has learned that Bruce Wayne is dating Vicki Vale and she attacks the couple in a jealous rage. Batman is retaliating.

What’s Changed: No trunks on Batman, but that could be an inker issue. Context: This was from a brief period in the 80’s where Batman and Catwoman were crime-fighting partners and a couple. Her knowledge of his secret identity was still undecided by editorial.

What’s Changed: “Seems we’re drifting apart” is now said by Batman instead of Catwoman. The Catwoman costume is also wrong (although her crouching position is correct), which made this scene more difficult to identify than the others. Scene 8: An original Jeph Loeb/Jim Lee piece produced as a “Hush” interlude for WIZARD Magazine. (It’s since been reprinted in the various Hush trade paperbacks)

Context: Selina and Bruce are trying their hands at a relationship which involves her spending time in the Batcave.

What’s Changed: Very little. The pacing and panel layout are similar due to how recent the original story was. I’d highly recommend checking out the full issue of Batman #44. It’s a great love letter to Batman and Catwoman’s relationship that this bibliography alone can’t do justice. Any memories from these original comics? Let us know in the comment section below.