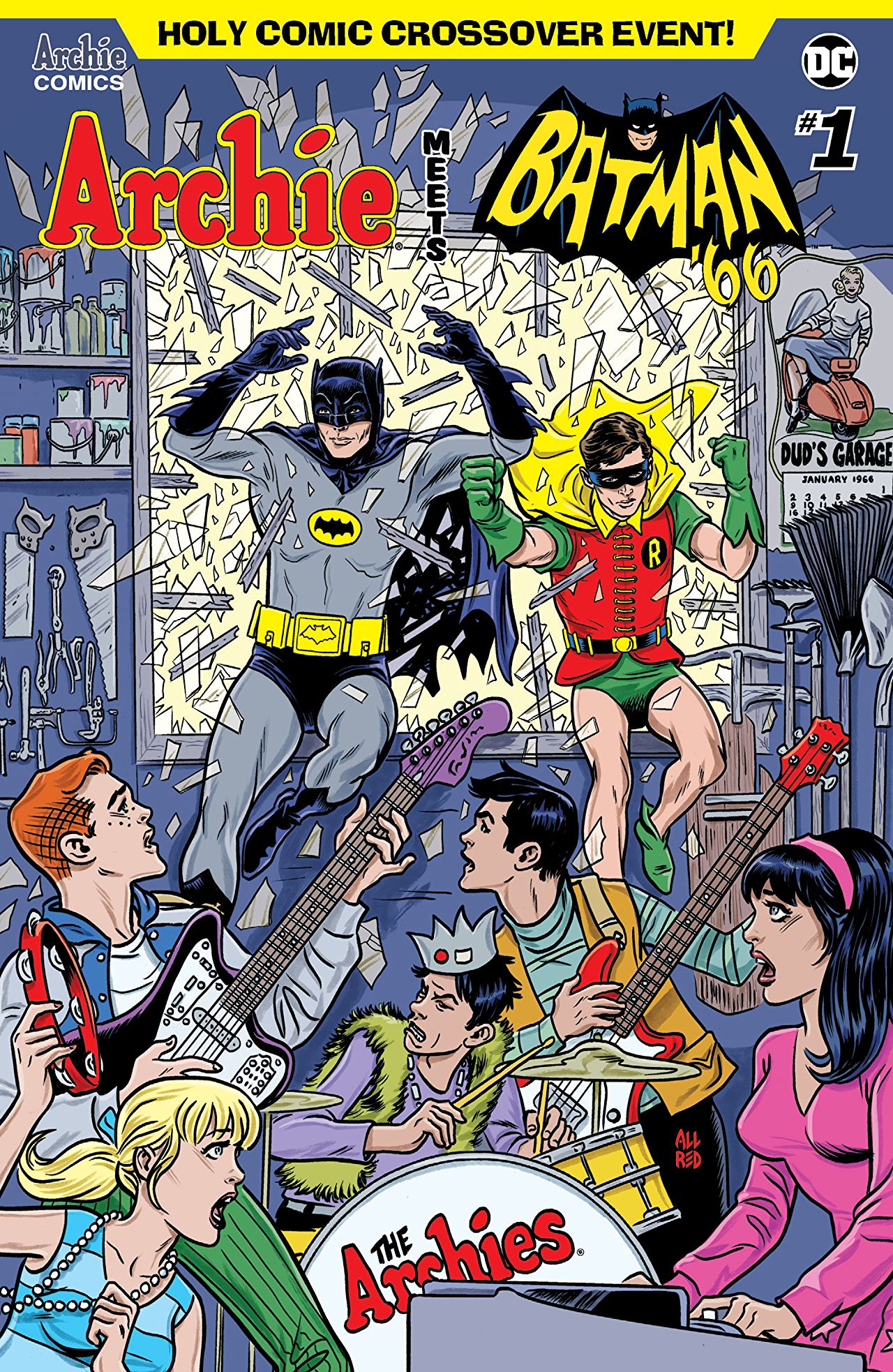 Overview: A group of Batman’s most fiendish foes decides to leave Gotham and take over a new town, Riverdale.

Synopsis (spoilers ahead): We begin this issue in the midst of a fight between Poison Ivy and the Dynamic Duo of Batman and Robin. Ivy has created a plant-based creature know as the Winged Snapdragon that she’s using to menace the people of the 1966 World’s Science Fair. Ivy offers Batman the chance to team up with her and turn against Robin, who wonders aloud why the bad guys always want to kill him. Batman refuses and uses a flamethrower on the Batmobile to set the Winged Snapdragon ablaze. Ivy retaliates by summoning sprouts, humanoid plant creatures,  to attack our heroes.

While Batman and Robin face off against Ivy’s creatures, Bookworm and his assistant, Footnote, sneak past to steal an electronic book, capable of holding over twenty digital tomes within. Bookworm must have this new technology and used Poison Ivy as a distraction while he swipes it before attempting an escape. Just as he’s leaving Batgirl arrives on the scene.

Batgirl stopped at a garden store per Batman’s request and produces weed killer which the trio use on the sprouts. Poison Ivy is defeated but Bookwork makes off with the electronic book, making our heroes wonder just what he was up to and why he chose to steal the new piece of technology.

News of Batman and his allies makes it all the way to a radio station in Riverdale which is playing while Archie and Jughead work on Archie’s car. Both are enamored with Batman’s exploits but Jughead reminds Archie they’re going to be late for school. The two runoff.

Meanwhile, in a secret lair, we see Joker, Catwoman, Riddler, and Penguin also hearing news of Poison Ivy’s defeat. While the villains see Ivy as a lesser villain they are they admit that Batman foils all of their schemes far too often. Penguin reveals a plan to avoid Batman by leaving Gotham and starting their plans for world domination instead in another town. A town that happens to be Riverdale. In fact, his plan is already in action as he’s using Siren and her mind-controlling songs to mesmerize the citizens.

Cut to the home of Veronica Lodge who is showing off her mod new dress to her father Hiram. Only Hiram seems distracted, offering short answers and staring off into the distance. He finally snaps and says there are too many plans to care about what is going on at the Lodge house and storms off leaving Veronica and her mother very confused.

At Riverdale High, Archie, Jughead, and Betty are quizzing each other for a history test when Veronica shows up to tell them about her father’s strange behavior. The gang brushes aside her worry saying that her father is always odd, leaving Veronica to try and find help elsewhere. She goes to the police station to ask Chief Keller for help but he is acting just as distracted and dazed as her father leaving her no closer to finding help.

Veronica continues her journey to get to the bottom of why everyone is acting so strangely by enlisting the help of Dilton Doiley. He takes her to where he keeps his computer and radio equipment and reveals he’s been tracking chatter from the police commissioner and another party in Gotham City. Using the radio, Dilton finds the frequency the chatter is coming from and allow Veronica to send out a distress call. She does so and gets a response from Batman himself who is impressed she was able to reach him. He tells her that help is on the way.

Analysis: This issue was the very definition of campy fun. We started in media res just like an episode of the old Batman ’66 series with the team fighting a villain during which the plot began to thicken with the introduction of another villain. Even the defeat of Poison Ivy was full of classic tropes from the old series including the arrival of a bunch of henchman and Batman being so prepared that he had Batgirl buy weed killer. I’m curious to see if Bookworm makes another appearance in the series or if he will just be allowed to get away with stealing the electronic book. As a side note, it was hilarious that the electronic book, clearly meant to be a riff on the Kindle, was so technologically advanced that it could hold 20 books. It is so reminiscent of the tone of the old show that it’s hard not to be entertained. I credit writers Jeff Parker and Michael Moreci with setting the right tone for the miniseries from the very start. It truly felt like watching an old episode of the series.

As for the plot itself, this is how you set up a crossover event. While the action mainly focused on Batman and his foes, we did start to get a through line of Veronica trying to solve the caper on her own and constantly finding herself up against a wall. Her persistence is keeping in line with her character, who even in the face of adversity keeps pushing forward. Rather than throwing the four main characters of the Archie universe right in the middle of the action, we build up to it slowly in the issue with a highlight being how cool Archie thinks the Batmobile is. You really get the sense that the two worlds co-exist without it seeming too forced.

I’m curious to see how the plan from Penguin and the other three villains play out. Using Siren’s mind controlling powers was a great call-back to the old show and I assume we’re going to see the affected citizens of Riverdale get in the way of Batman and his allies getting to the bottom of the scheme. It will only escalate from here and I can’t wait to see where we go next. I just hope we don’t get into any situations where Betty and Veronica become damsels in distress. Perhaps flip the script and make Archie the one who needs saving.

Touching on the artwork in the book, Dan Parent has done a lot of previous work in the Archie universe and I’m glad he was brought on board for this series. He captures the classic look of Archie and the gang and succeeds in working the world of Batman into this universe, with all the characters being instantly recognizable and nobody seems out of place. The colors in the book by Kelly Fitzpatrick are another highlight, be bright and bold. The classic Archie stories are always set in this colorful, pop-infused world and this issue really captured that aesthetic.

Overall I think this issue will please fans of both Batman ’66 as well as the world of Archie and his friends. We’ve got a heaping helping of villains to cause mayhem in Riverdale and just as many heroes to stand against them. I cannot wait for the first real meeting between Batman and Archie.

Final Thoughts: A strong start to the crossover event, Archie Meets Batman ’66 is elevated thanks to a fun script and bright, clean art. I look forward to what dastardly deeds our vile villains come up with next time and more importantly how our Riverdale gang stands up to them.