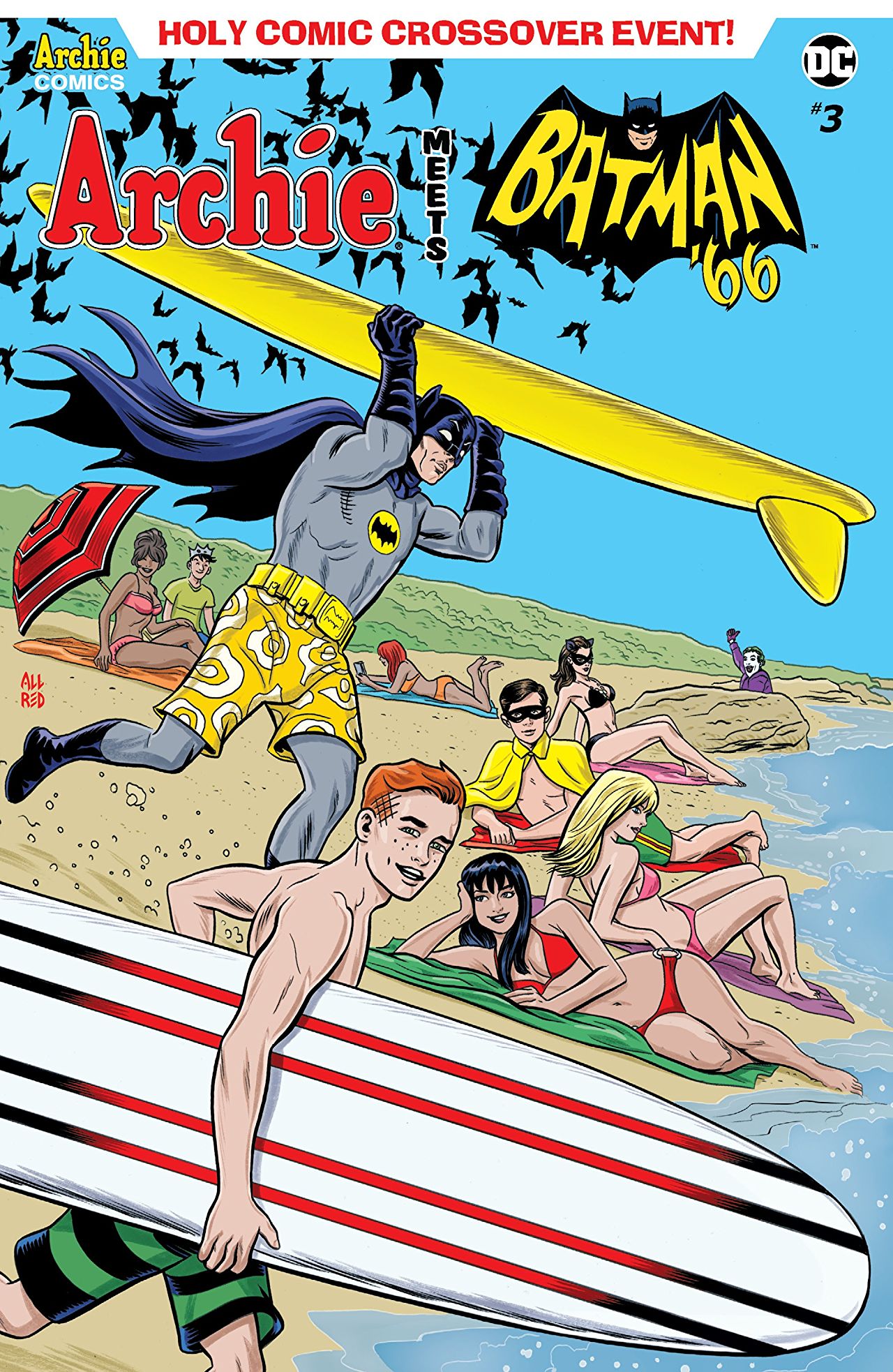 Overview: Batman hunts down the Bookworm as the United Underworld continues their plans to take control of Riverdale.

Synopsis (spoilers ahead): The issue opens at Pops’ Diner where the Joker, Catwoman, The Riddler, Penguin, and Siren plot their takeover of Riverdale over cheeseburgers and milkshakes.  Archie and the gang show up at the diner and are shooed away by the mind-controlled Pops.  As Archie remarks about how weird Pops has been asking, Dick Grayson and Barbara Gordon pull up on Barbara’s motorcycle.  Archie invites Barbara and Dick to Veronica’s house and off they go.

Meanwhile, Batman chases Bookworm’s henchwoman Footnote through the streets in the Batmobile. Footnote speeds on her Vespa towards a brick wall and hits a remote which activates a secret door in the wall. As Footnote goes through the door, Batman manages to swing through the door before it closes.

Jughead sneaks through the bathroom window at Pops and discovers the United Underworld in the diner before being sucker punched from behind by the Joker. Meanwhile, Dick and Barbara join the gang at Veronica’s house for a pool party.  While in the pool, Barbara’s interest is peaked at the mention of Dilton Doiley being seen getting into a car with a guy in a green suit.  Veronica’s father then leaves, stating that he has to “supervise the lair” and Dick and Barbara notice that he is carrying one of the Penguin’s umbrellas.

Back in the Bookworm’s lair, Batman confronts the Bookworm and Footnote.  Bookworm challenges Batman to choose between two levers on a machine, one that leads to the robot brain and one that leads to Batman’s death.  Batman deduces that he has to pull both levers at the same time, releasing the robot brain.   Bookworm orders his henchmen to attack, and Batman takes them down and apprehends Bookworm and Footnote.  Batman is then radioed by Robin who tells him that the United Underworld has invaded Riverdale.

Jughead wakes strapped to a chair and finds the Joker with a plate of Pops’ cheeseburgers.   The issue ends with the Joker telling Jughead that he is going to help them crack the code to controlling the teenage brain.

Analysis: This issue sees the series losing some steam.   There really isn’t anything that happens in this issue that really adds much to the story in any meaningful way.  In the last issue the Joker earmarks Jughead as a test subject for taking control of the teenagers in Riverdale, but then the story doesn’t really do anything with that until Jughead stumbles into the Joker’s clutches without the villains having to do anything about it.  It would have been just as easy to have this issue focus on the Joker kidnapping Jughead. I’m puzzled as to the lack of focus in this issue.  I understand that this book has to keep a balance between playing in both Archie and Batman’s world, and the burgers and parties at Veronica’s house of it all are very much an Archie thing, but it feels like the story takes a detour to bring those elements into the story.

It’s fun to see Bookworm pop up in this series as he’s one of those villains we are likely not to see anywhere else, but Bookworm’s involvement here doesn’t seem to have any other purpose than to give Batman something to do while Dick and Barbara go to a pool party. I think there was a missed opportunity to have the Bookworm subplot, which has already lasted through three issues, to factor into the larger story.  Also, the living brain deathtrap is terrible.  The way it is presented here, Batman is only in any danger as long as he stands exactly where the glowing swirly lines are and could probably be defeated by Batman stepping left or right.

Dan Parent is, no question about it, deft at realizing all the characters in the “Archie” style, especially in the more dialogue-heavy scenes such as the United Underworld at Pops Diner or at the pool party.  I also enjoyed the inclusion of the Cesar Romero Joker mustache, which is a fun attention to detail.  That being said, Parent doesn’t seem to be very skilled at staging action sequences.  The chase sequence between Batman and Footnote feels very rushed and feels more like someone summing up a longer sequence in a flashback and it’s as if Parent wasn’t given enough space to do it properly and the face-off between Batman and Bookworm has that same rushed feeling.

Final Thoughts: This is a fun issue.  There’s no doubt about it.  But the creative team still has to tell a compelling story that moves the plot forward and this issue feels like it wastes the momentum it built up in the previous two issues. Let’s hope it recovers next issue.