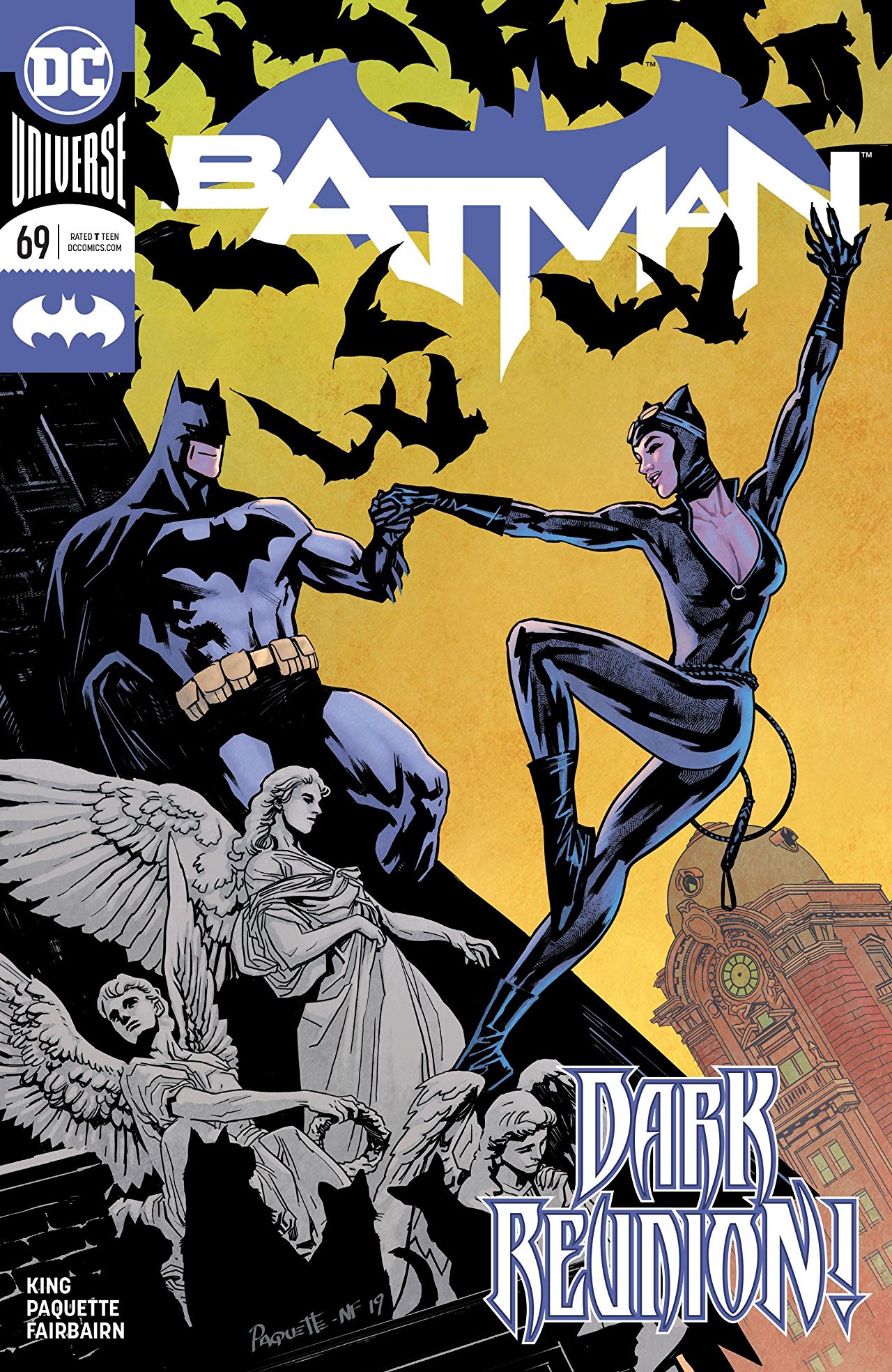 Overview: In his final Knightmare, Batman struggles to break free of the Scarecrow toxin as he and Catwoman dance through the dream.

Synopsis (spoilers ahead): Bruce finds himself, dressed in a tuxedo standing in a beautiful, empty ballroom, as the song “Some of These Days” fills the air around him. Walking across the room, he offers his hand to dance, saying “Dance with me.” Clad in her wedding dress, Catwoman echoes her response to his first proposal of marriage: “Bruce, say it again. But this time, you poor boy, don’t demand. Ask me.” Bruce complies, and Selina assents, and the two stand together to dance.

In Arkham, a naked, bleeding and maniacally grinning Bane challenges Thomas Wayne, Flashpoint Batman, clad only in loose exercise pants, to another bout. Though Thomas tries to focus Bane on their plans, Bane merely punches him, beginning the bout, to which Thomas warns him that he’ll lose again.

Batman, now clad in his costume, dances with Selina on the boat where she believes they first met. He recounts the last six dreams, as they flash to the street from Batman: Year One. He explains that he has a backup plan for dealing with Scarecrow toxins, and remembers Thomas attacking him in the cave. As Batman and Catwoman dance through streets paved with music, she clad in her purple costume with the yellow cape, he recalls that the last thing his father told him was “Don’t be Batman.”

Batman and Catwoman, now in a pet store, dance over dozens of cats, as Batman works out that Bane and his father want to stop him from being Batman.

Thomas beats Bane to the ground, using all of Bruce’s normal catchphrases like “I’m the Dark Knight.” He claims Bane has never beaten the “true” Batman, as Bruce is just a broken little boy at heart.

Bruce unravels his plan to free himself from the Scarecrow toxin, as his unconscious mind took the forms of his friends and allies.

As Thomas walks away, Bane grabs his ankle and throws him to the ground, then pins him and roars his name.

In the Knightmare, Batman realizes that too much fear can overpower the toxin, causing enough adrenaline release to escape. But to find his greatest fear, he needs to know the real reason Catwoman left him. So he stands on the rooftop in the rain before her, and asks “Why?”

As Bane starts to choke Thomas, Flashpoint Batman pulls a pistol from his pocket and thrusts it under Bane’s chin. Bane realizes that unlike Bruce, Thomas cheats – to which Thomas responds that he wins.

In the Batcave, Batman and Catwoman continue to dance as she explains why she left. She claims that his vow to be Batman prevents him from truly loving anyone. Clad in her wedding dress again, after progressing through a history of her costumes, Selina walks away with tears in her eyes, telling Bruce it’s time to wake up.

Analysis: Fans of Tom King’s twelve-issue miniseries’ from the past four years, “The Omega Men,” “Vision,” and “Mister Miracle,” will recognize the way King has wrapped up this final issue of the “Knightmares” arc, titled “The Last Dance.” After many issues which drop repeated hints and seemingly out of context deep dives into continuity, King likes to tie everything together in a thematic and plot-connecting bow, usually in an intensely tragic way. And that’s exactly what we get here, in Batman #69.

King weaves so many references to his previous issues, not just the Knightmares, which are contextualized by Batman’s explanation to Catwoman in the dream, but to his run on Batman as a whole. The song “Some of These Days” calls back to Batman and Catwoman’s alternate future seen in the second annual, all of the costumes and locations which are shown throughout Batman’s dream connect to the flashbacks in Batman #44, Bruce connects his father, the alternate timeline Flashpoint Batman, telling him not to be Batman in “The Button” to his alliance with Bane. Above all, the repeated image of Batman and Catwoman on a rooftop, in the pouring rain, with Batman asking Catwoman, “Why?” Everything has appeared before, but appears again recontextualized, giving added meaning to the repetition and the original appearance. The ending, with Batman’s greatest fear – Catwoman leaving him because he cannot love her or anyone else truly, shatters both the reader’s heart and the poison that imprisons Batman. This ending, while clearly definitive in terms of Batman’s fear, does pose the question of if Batman truly lacks the capacity to love. His devotion to Catwoman, his sons, his partners, and the city of Gotham seems to indicate otherwise, so hopefully, King is setting up a direction for growth in Batman, rather than leaving him in death. However, Scott Snyder’s New 52 run of Batman ended with an affirmation that Batman actually is dead, and unable to truly form relationships (the destruction of his relationship with Julie Madison was a complex statement of this argument in Batman #49-50), so some very intelligent and influential writers of Batman may have paved the way for a truly tragic conclusion to King’s run.

A few notes of interest connected to the upcoming two arcs, “The Fall and the Fallen” and “City of Bane” – Thomas Wayne, the Flashpoint Batman, fights Bane in the issue, claiming that his willingness to kill makes him the “true” Batman. Since Bane was created in the 1990s to test the idea if the “true” Batman should kill, through the character of Azrael, it’s a fascinating look at the thematics of the character of our main antagonist, and alternate perceptions of Batman. A stray line from Thomas, that Bane will think he’s won, but will have actually lost – seems to look back at the conclusion of “I Am Bane” – in which Bane appears to win, but Batman was merely waiting for the right moment – AND when Batman appears to win at that moment, but Bane actually sets in motion the plan to break Batman’s spirit through his relationship with Catwoman. Additionally, it likely foreshadows the way Batman will beat Bane in the end, though several more major plot points have to happen first, including the early, ominous promise from Gotham Girl that Batman will die.

Artist Yanick Paquette, known for several strong collaborations on Batman with Scott Snyder, as well as landmark other work throughout the DC Universe, provides beautiful, appealing pencils and appropriately dreamlike layouts. He adeptly references all of Catwoman’s costumes, last seen in Mikel Janin’s work for Batman #44, and colorist Nathan Fairbairn provides beautiful, rich colors contrasting the unreality of the dream with the harsh lighting of Bane and Thomas’s fight. Paquette and Fairbairn also provide the main cover, a lovely if a somewhat generic image of Bat and Cat dancing on the rooftops, while Francesco Mattina gives us a monochromatic scowling Batman bust on the alternate cover. Both are very technically skilled, and Mattina’s work isn’t quite as drastically disconnected from the interiors as the cover he provided for the last issue.

Final Thoughts: King and Paquette masterfully tie the seven Knightmares together with the rest of the run, as Bruce slowly and painfully wakes up.