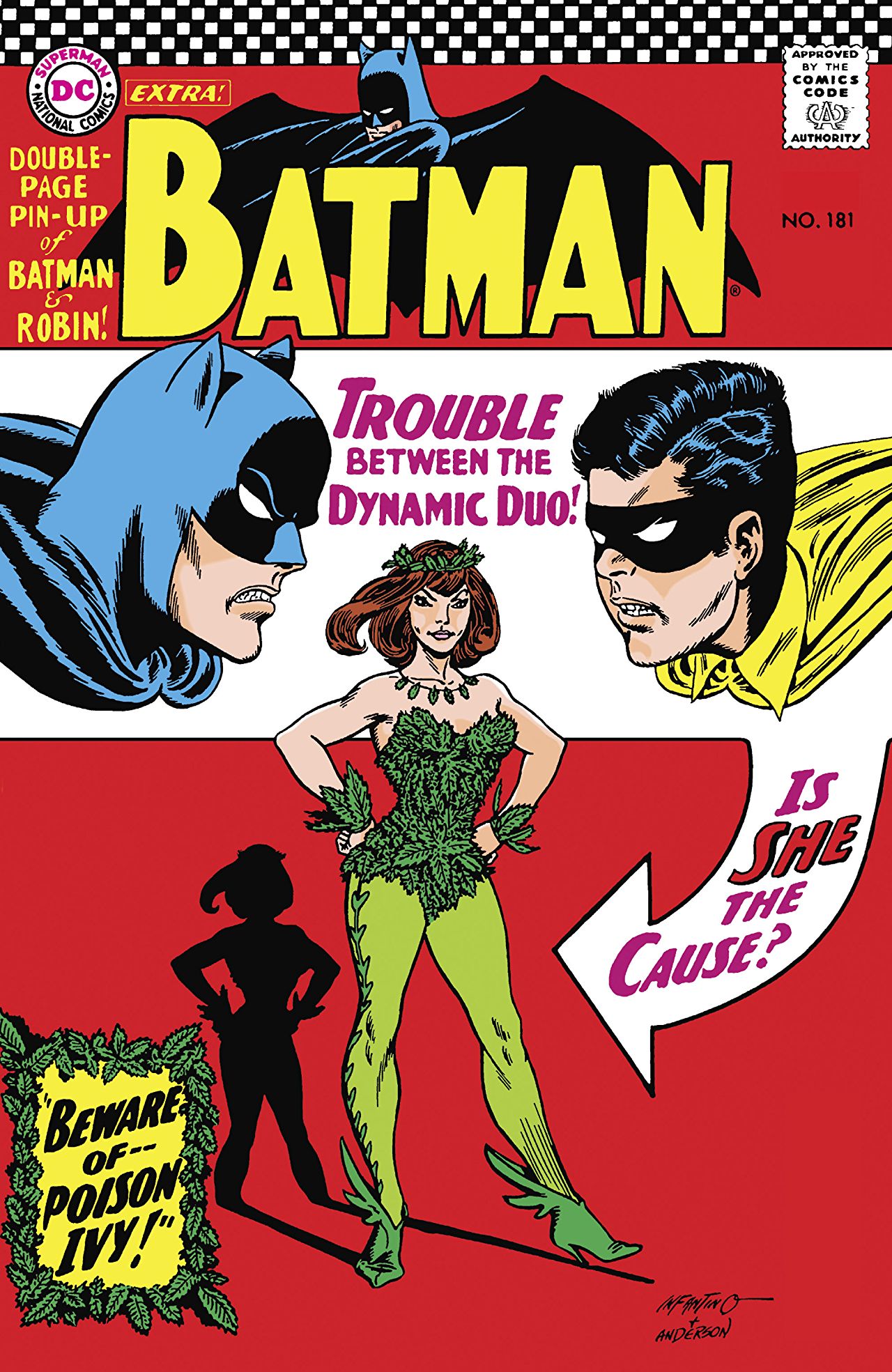 Editor’s Note: DC recently launched a line of comics known as facsimile editions. Those unfamiliar with what exactly facsimile comics are, they are exact reprints of the comics including the original advertisements from when the comic was first published. The goal of the line is to feature some prominent moments from within history that might also tie into current stories as well. While the following review is not of the exact print version of the new edition, it is a review of the original story published in the new edition.

Overview: Female super-criminals fight over who’s the number one, only for a fourth wheel to claim the title.

Synopsis (spoilers ahead): Story #1: Beware of Poison Ivy: Bruce and Dick are attending a museum exhibit covering the three deadliest women on the Most Wanted List. While there, Bruce bumps into a woman claiming to be a better criminal than all three of them since she’s never even been noticed by the authorities and has been too good. She calls herself Poison Ivy and a pack of reporters swarm her, as she is quite beautiful, in response to her claim. She uses an electrified charge hidden in her lipstick to supercharge all the camera flashes, blinding everyone in the room and making her escape. An elaborate escape sequence follows, where Bruce changes into his bat-suit while blind and accidentally falls down an open elevator shaft that’s going through repairs. Batman is quick to recover and glides out to safety, heading outside to try and track Ivy, but he’s still very blind.

It turns out Ivy hired a bunch of thugs to stand outside and attack anyone who followed her out, but Bruce manages to blind fight his way through the thugs. Poison Ivy soon becomes enamored with both Bruce and Batman, thinking they are separate people. She gives the heroes the slip, and as Robin finds Batman taking the last of the thugs down, Batman comments on how infatuated he is with Ivy. Robin tries to talk some sense into Batman and he seems to have gotten better.

Meanwhile, Ivy is planning her schemes to take out all three of the top female criminals and supplant them. She lures them all to a house by sending each a setter addressed by another of them, and the criminals all easily fall for the ruse, attempting to get the jump on each other by arriving an hour early. Ivy also sends a letter to both Bruce and Batman, trying to decide which of the two men she likes more. As Bruce and Dick arrive on gliders, they see a giant fight ensuing between the three women and their respective gangs, each duking it out for the top position. While Batman and Robin get involved in the mosh pit, Ivy comes out to greet the women, offering the victor a priceless crown. When all three leap for the crown, Ivy reveals the crown was electrified and the three criminals spazz out, waiting for the police to arrest them.

Ivy then approaches Bruce and gives him a deep kiss, ensnaring him in her lure. Dick rushes to pull him to his senses, and realizes Ivy had been lacing her perfume with chloroform to null Batman’s senses. Ivy attempts to escape, but with a quick Batarang throw, they capture Ivy and lock her away, with Ivy swearing to make Batman hers.

Story #2: The Perfect Crime…Slightly Imperfect: Batman attends his monthly meeting of crime solvers when one of the members, a detective novelist named Kaye Daye reveals to them that the novel she is getting an award for later today wasn’t written by her. Someone copied her writing style and submitted it to her editor without her realizing. But before she can go forward, a voice comes out from her broach, declaring that Kaye will be dead by 10 pm sharp.

Batman and the other investigators leap into action, with Batman leading the mystery and the rest acting as Kaye’s bodyguards until it is all over. Bruce deduces while driving away that the Kaye they spoke with had to be a fake because there’s no way she’d have just picked the right broach by accident needed to deliver the pre-recorded death threat. So he heads to Kaye’s place to look for clues. He finds one left by Kaye leading to her next-door neighbor’s place. There, a group of thugs holds the real Kaye hostage. Batman beats up the thugs and saves Kaye. They make it to the award show and expose the woman masquerading as Kaye. Further investigation reveals her motivations and alibi, and she is taken away for attempted murder and inheritance fraud.

Analysis: It’s a double-feature tonight boys and girls, though the second story is a lot worse than the first. Poison Ivy’s debut issue reveals to us nearly sixty years later just how different Ivy has become. No longer the eco-revolutionary fighting against capitalism and global warming. Now in her original incarnation, Ivy is just a generic criminal who really wants to get the credit she deserves for being the best criminal of them all. Ivy’s plan in this story is effectively to start a gang war, and while that may have been an interesting premise, the three criminals she goads into the war are so dumb that there’s no real sense of mystery here. Ivy just mops the floor of any adversary she has in this issue.

Ironically the story is saved most because Bruce’s blind antics are so utterly dumb. Everything Bruce does in this story is the actions of an idiot and its hilarious. But it’s not entirely enough to save the story. Honestly, the Schumacher Batman and Robin film had a better take on this exact premise, with Poison Ivy seducing Batman and it forming a rift between him and Dick. Except in this story, its less a “rift” and more “Dick has to save Bruce from his own ineptitude”.

The companion story is a bit smarter in the premise and mystery, but it barely has enough time to actually tell a mystery, and so Batman solves the mystery in under two seconds and nothing actually happens besides a fistfight.

Final Thoughts: The character and design of Silken Spider is interesting enough to warrant DC using her as a template for a modern interpretation. Batman could use some more female villains and I don’t think he’s had a Spider-themed villain of his own yet. The companion story implies that Batman and Jim Gordon meet up once a month to gossip about the latest mystery novel and I love it.