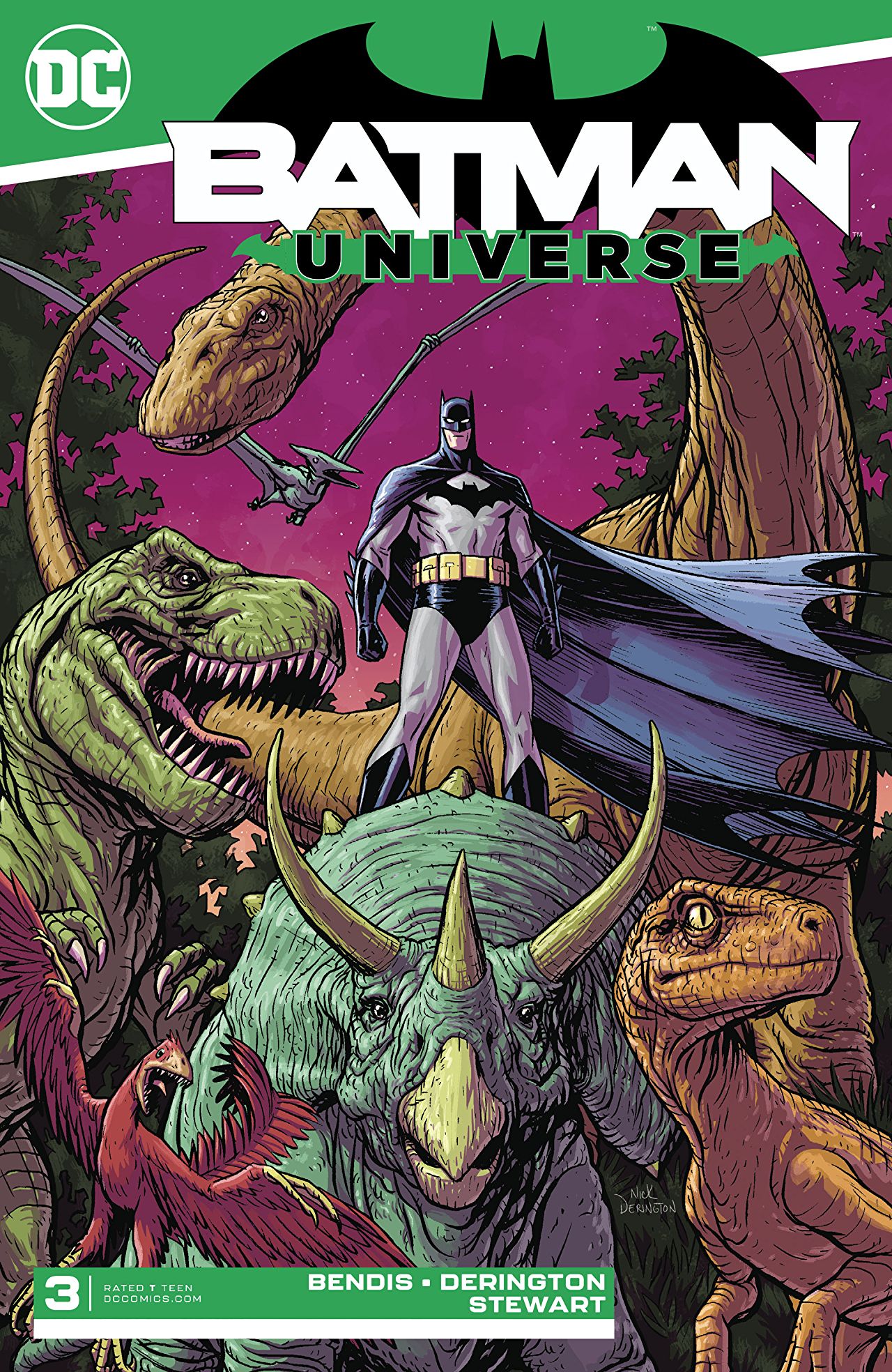 Overview: The hunt for the egg brings Batman to Thangar and Gorilla City and eventually to Dinosaur Island.

Synopsis (spoilers ahead): Batman wakes up from unconsciousness to being questioned by members of the Thangarian law enforcement, who are curious about who he is and why he is on Thanagar. Batman quickly dissuades them on any ill intent, even going so far as to remove his cowl in an effort to show who he is.

The chief of officer takes Batman to the science center, and in one of the most charming parts of the book, she realizes Batman can’t fly (only glide!) She gives him one of their winged harnesses and he flies with her.

En-route to the science center however, they are attached by Onimar Synn, the Sin-Eater! Batman is then reverse sling-shotted across space, back to Gorilla City, where the wounded King tells him that Vandal Savage stole the egg. Who is Vandal Savage, the Gorilla asks.

Batman then collapses, potentially in shock, or just worn out from the vast teleportations across the galaxy, before waking up in the Hall of Justice, being tended to by Green Lantern and Cyborg. Batman briefs them on the state of affairs, and they inform him the egg contained a strange unknown kind of radiation which creates the “slingshot wormholes” that sent Batman across the galaxy and back.

Green Lantern confides he dislikes Vandal Savage intensely, much more than he dislikes most megalomaniacs. Batman advises him is because Vandal Savage has been around since the dawn of mankind, and he has seen and done everything you can do in the world, and all he see’s is something to conquer.

They are led to a mountain, inside of which Vandal Savage is cursing the egg and his inability to use it. Suddenly he vanishes and as Green Lantern goes toward the egg, they are again slung-shot by the egg’s power, this time not through space, but time – as they come face to face with Jonah Hex in the 1800’s!

Analysis: There’s a strong element of whimsy to this book which lends it some charm. This is the kind of a comic that wouldn’t be out of place in the Bronze Age JLA title, with a strong layer of cheese and fun, mixed in with some neat sci-fi concepts.

The characterization of Batman feels more grounded than previously, and the dialogue (which used to be a Bendis strength and now typically undermines even his better work) is much better here than in previous issues. Instead, for most of the issue we are spared the usual tropes of Bendis lightweight, comedy clunkers for a far more serviceable and efficient script.

The art by Nick Derington is again a strong point and along with a wonderful splash page of Dinosaur Island helps carry the issue, but sadly the last few scenes are unfortunately where the issue’s quality heads south. Extended conversations between Green Lantern and Batman suddenly supply a series of cringe-worthy examples of Bendis “humor”, which is neither as funny or is as he hopes it to be.

In many ways it’s a shame because a few bad pages of interaction sully what is otherwise a strong issue. Bendis supporters may well claim that this his strength, but when you see the way Batman is talking, it feels out of character and out of time, cheapening the impact of the issue overall. To balance against this though is the simple fact that this is a light-hearted romp through some random corners of the DC Universe, and overall it’s an effective and fun romp.

This issue ends well and doesn’t leave a bad taste in my mouth, but it could certainly be tightened up a little and this could then be one of the best books on the shelf from DC. Strong artwork by Derington easily gives this book a lift, as overall it’s an attractive package and a good advertisement for both Batman and the DC Universe.

Final Thoughts: A visually strong and mostly tight issue, let down by sub-standard character interaction at times. Give Bendis a real editor and this would be a four-star book.