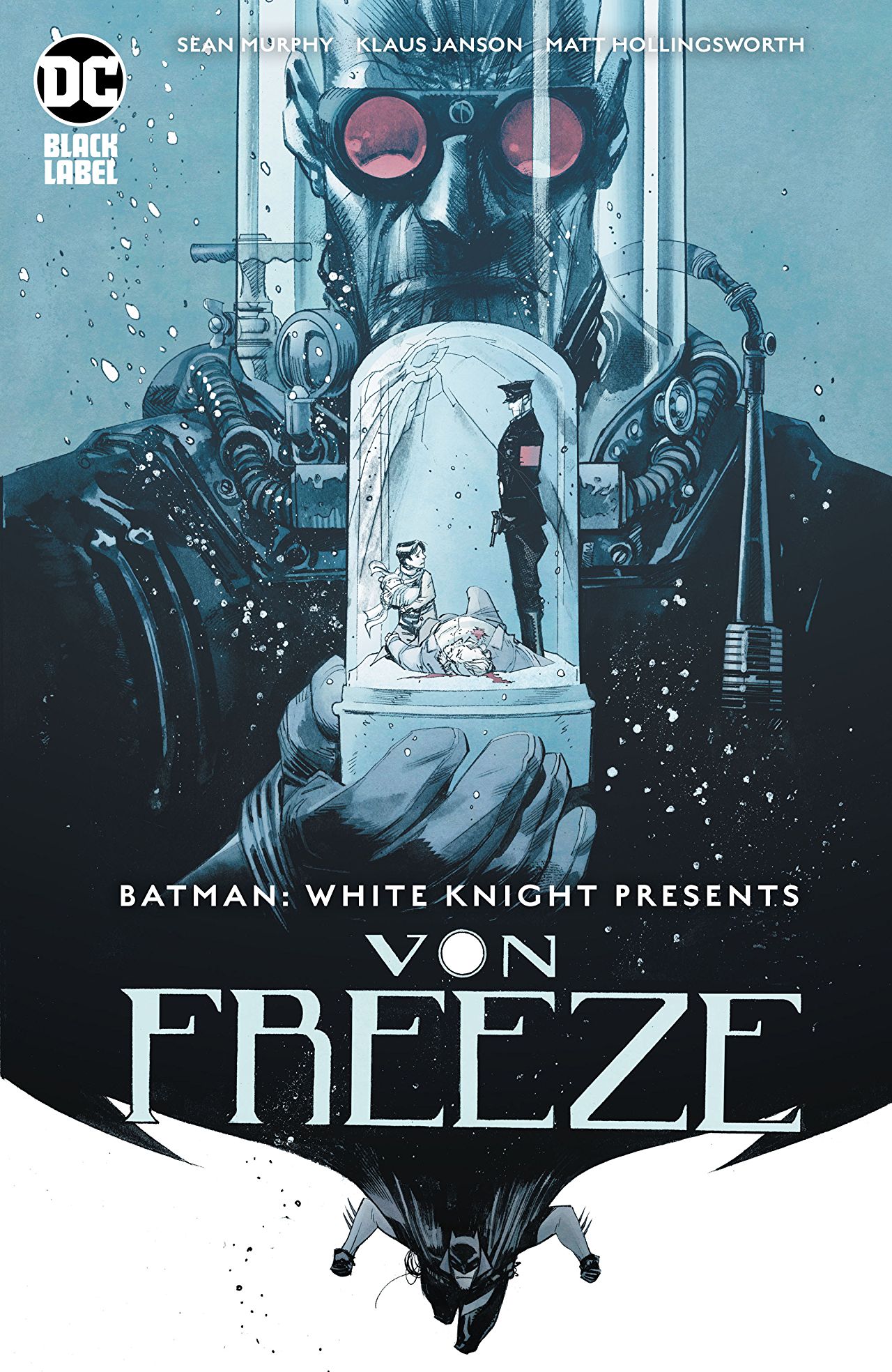 Overview: In the world of Batman: White Knight, a tragic tale from Mr. Freeze’s background spins out of World War II.

Synopsis (spoilers ahead): On a snowy night in the 1930s, a Nazi officer holds a smoking gun over a dying man, who begs a boy to take the baby he is holding and keep her safe.

In a more recent time period – but not the present – Victor Freeze faces outrage from a young female employee for his work with Wayne Cryotech because of the Nazi origins of the project. Victor tells her there’s more to the story, but is interrupted by the news that his partner, Thomas Wayne, is here, and his wife Martha is going into premature labor. Victor convinces Thomas to assist rather than operate on his wife, then uses his cryo-technology to save Martha and the baby. Thomas and Victor think about fatherhood, which leads Victor back to the story he was telling his female employee. His father, Baron von Fries, and Jewish doctor Jacob Smithstein, were best friends, despite the rising antisemitism in Germany. Though Fries tried to evacuate Jacob as Hitler’s policies became more and more dangerous, Jacob insisted on helping the country he loved. He also gave emotional warmth to young Victor, who struggled with his father’s cold attitude. As Jacob grew closer to the Baron’s son, the Baron gradually fell into Nazi circles, little choice by little choice. Jacob discovered that the Baron was experimenting on Jewish prisoners, and finally decided to flee – taking Victor with him.

Though stopped by Nazi soldiers, the Baron attempts to save them – though still keeping them prisoner. Jacob revolts, refusing to continue to be a prisoner, and in the struggle, the Baron accidentally shoots his best friend. Victor promises to keep the baby from the opening scene, now revealed to be Jacob’s daughter Nora. The Baron begs to get Jacob medical attention, but the Nazi soldiers refuse and threaten the Baron as well. Jacob tells the Baron to get his family out of Germany, and the Baron makes a plan: use his freeze ray technology to kill all of the Nazi soldiers threatening them and get everyone out of the country to France.

Back in Thomas and Victor’s conversation, Victor reveals that the young female employee is Nora, Jacob’s daughter, and this is the first time she is hearing the story as well as Thomas.

In the presence of Batman: Curse of the White Knight, Victor and Nora give Batman – who they know is Bruce Wayne – Thomas’s watch, and Batman drives away with Harley Quinn into the pages of the current story.

Analysis: I’ve been critical of Sean Murphy’s writing for the last few issues of Batman: Curse of the White Knight. However, here, in an oversized (probably about double the length of a normal comic release), Murphy finds the right space to develop characters, provide room for powerful visuals, and pay off his fairly simple but effective story conflict setups. The way he handles Victor Freeze’s complicated, cold, but not heartless father, the Baron, really shows a commitment to showing real people, and not just giving a simplistic story of good and evil with nothing in between. He also refuses to provide an easy redemption – the Baron, despite his grief and guilt, does not seek redemption, leaving that for his son. The connection to the current story provides a fun look to the future, but isn’t entirely necessary – but gives the story a nice feeling of connection to the modern-day, showing us that history can indeed inform the present in positive as well as negative ways.

Klaus Janson, master inker for Frank Miller and brilliant artist in his own right, produces some of the best work of his career here. He provides a sense of rough, but polished power in his linework, and captures the horror and violence of Nazi Germany, but also the beauty of the connections between the characters. This piece will hopefully become one of Jason’s lasting legacies, alongside his work with Miller for the Dark Knight Returns books and his masterful penciling for Detective Comics Annual #1 by Denny O’Neil.

Sean Murphy also provides a page-long postscript about the collaboration between himself and Janson, and provides a nice insight into the creation of the work.