Review: Legends of the Dark Knight #3 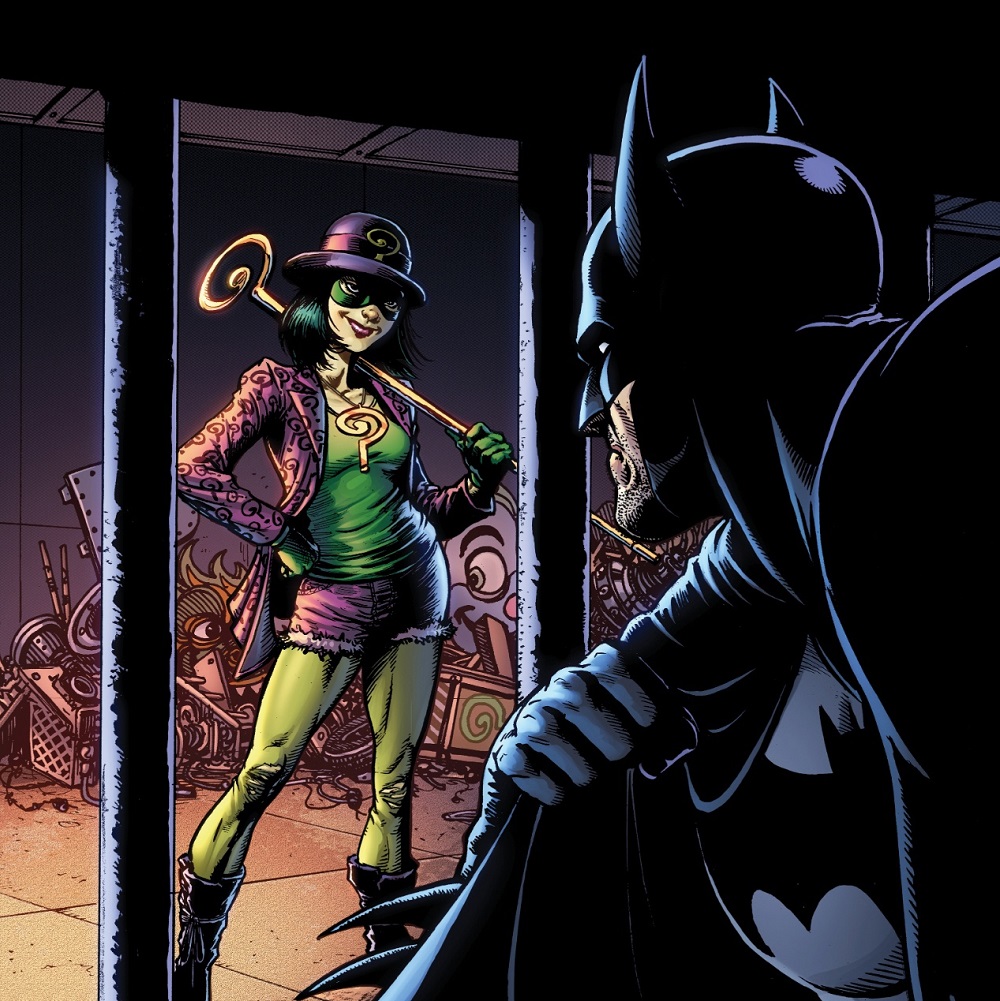 Overview: In Legends of the Dark Knight #3, it’s the finale of the “Bad Night, Good Knight” arc as Batman faces off against Quiz, Riddler, and Scarecrow!

Synopsis (spoilers ahead): Legends of the Dark Knight #3 begins after having lured and trapped Batman in a cage at the Riddler’s hideout, Quiz, Nygma’s protégé, informs him that she brought the Dark Knight here in order to get Riddler out of a bad deal he made with the Scarecrow, Jonathan Crane. This is all much to the chagrin of Nygma, who is horrified that Batman now knows the location of their base of operations. After a little banter, though, the Caped Crusader agrees to help the pair out, simultaneously saving Gotham from a gas attack.

We then learn of Quiz’s origin. Nygma had received a riddle himself, leading him to a bank heist. The codes having failed, and the police are approaching quickly, he is saved by a young woman who turns out to be the creator of the riddle. He takes her on as a partner and falls in love. Wanting to go straight and build an actual life with Quiz, Nygma is now desperate to keep away from Scarecrow and, more importantly, out of prison.

Batman arrives at the docks where Riddler was supposed to meet up with Scarecrow to finish their business with the Russian dealer Gas-Mask. Upset that Nygma didn’t show, Scarecrow nonetheless meets up with Gas-Mask. The deal goes south, however, when Crane drops a fear-gas grenade inside the hideout, exposing all to the gas. Before Crane can grab his loot and continue on, though, Batman has taken matters into his own hands and has taken out Scarecrow’s guard.

Later, on the roof of the GCPD, Commissioner Gordon receives word that the Scarecrow has been taken into custody, relieving him and his men of one more dangerous night in Gotham City.

At Wayne Manor, Alfred Pennyworth has prepared breakfast for Master Bruce but is horrified at the battle-worn-and-weary figure of Batman as he enters from the Batcave. During a shower scene, we are pulled back into the previous night’s battle with Scarecrow to finish the story.

At the docks, Batman, nearing exhaustion, is ambushed by Crane’s backup reinforcements. Luckily for the Dark Knight, the effects of the fear gas have gotten to Gas-Mask, who has taken to the steering wheel of the boat. The world sways beneath the feet of the thugs, evening out the playing field. Most of the attackers are tossed into the waves, but Batman gets a bullet to his shoulder by the last man standing before falling overboard himself.

Back in the cabin, Crane watches over the furious steering of Gas-Mask, lamenting his night. The worst is yet to come, however, as he discovers a box decorated with question marks: Quiz’s ‘surprise’ bomb. The explosion hurls Crane and Batman into the ocean. Leaving Scarecrow to fend for himself, Batman swims the mile to shore, nearly depleted of energy and returns to Wayne Manor where, after a harsh but loving scolding from Alfred, Bruce Wayne finally ends his night in the comfort of his parents’ home.

Analysis: The finale of “Bad Night, Good Knight” in Legends of the Dark Knight #3 sees the end of Bruce’s very long and exhausting evening as he is enlisted by the Riddler and Quiz to clean up the mess they’ve made in getting into bed, so to speak, with the Scarecrow. As Quiz states, Batman’s job is to save people, and this includes the not-so-squeaky-clean villainous lot, as well.

We are given Quiz’s origin story…..sort of? We know nearly nothing of her except that she led the Riddler onto a caper that he evidently was unable to truly pass, forcing him to turn to her and take her on as his partner. We are able to intuit that they fall in love (or at least he falls for her). I was somewhat confused by this, as she looked to be quite a bit younger given the portrayal. Before her origin, I would’ve guessed she was perhaps in her early teens. After her origin, I would guess she was perhaps in her….mid-to-late teens. It seems that she was an employee at the bank Nygma was robbing, but it could also just have been ‘her keycard’ that she had already swiped. The Riddler, on the other hand, seems to be quite a deal older, although we are specifically told they are similar in age. The imagery was a little offsetting, especially since the Riddler we see here is the classic version, much more the Super Friends version of him than the more modern serial killer with a question mark scarred to his chest.

We understand that he wants to build a life for her, but we get nearly nothing of her own motives or desires. I was expecting a double-cross of some sort, but that didn’t really pan out. Unfortunately, we didn’t get to see how ANYTHING panned out with the pair, as they disappear from the story the moment Batman heads to the docks. We get no closure from the two at all, and any closure would have at least served to tidy things up storywise, which is odd since it took place over three full issues.

Gas-Mask, the Russian dealer of illegal gasses, was set up to be an antagonist of note, but he is easily knocked down a few levels in a matter of panels when his namesake is quite readily removed from him. From that point, he is a wild card who unintentionally saves the day and apparently dies in the explosion.

For a few brief pages in the middle of the issue, the story takes on a different tone from the straightforward action tale to a somewhat contemplative beat. There’s a message about how the little things in life keep us going, supplying us with enough hope and warmth to allow us to continue our daily exercises in turmoil. There doesn’t seem to be enough of this writing to balance out the action as evenly as perhaps it should. It was good, but I think that particular moment may have been better served at the end of the book, right before Alfred puts Bruce to bed.

The artwork was fairly good, though not without flaws. There were some inconsistencies with facial expressions and Batman’s costume design, but all in all, it was decent.

Legends of the Dark Knight #3

This first tale of the new incarnation of the Legends of the Dark Knight title feels and reads a bit…..whelming. We are introduced to a new character of interest for the Riddler, but we never get any closure on them. The rest of the story plays everything rather safely, and unfortunately, this doesn’t make a strong impression and doesn’t excite any enthusiasm for further adventures from this creative team, as well as the title itself.