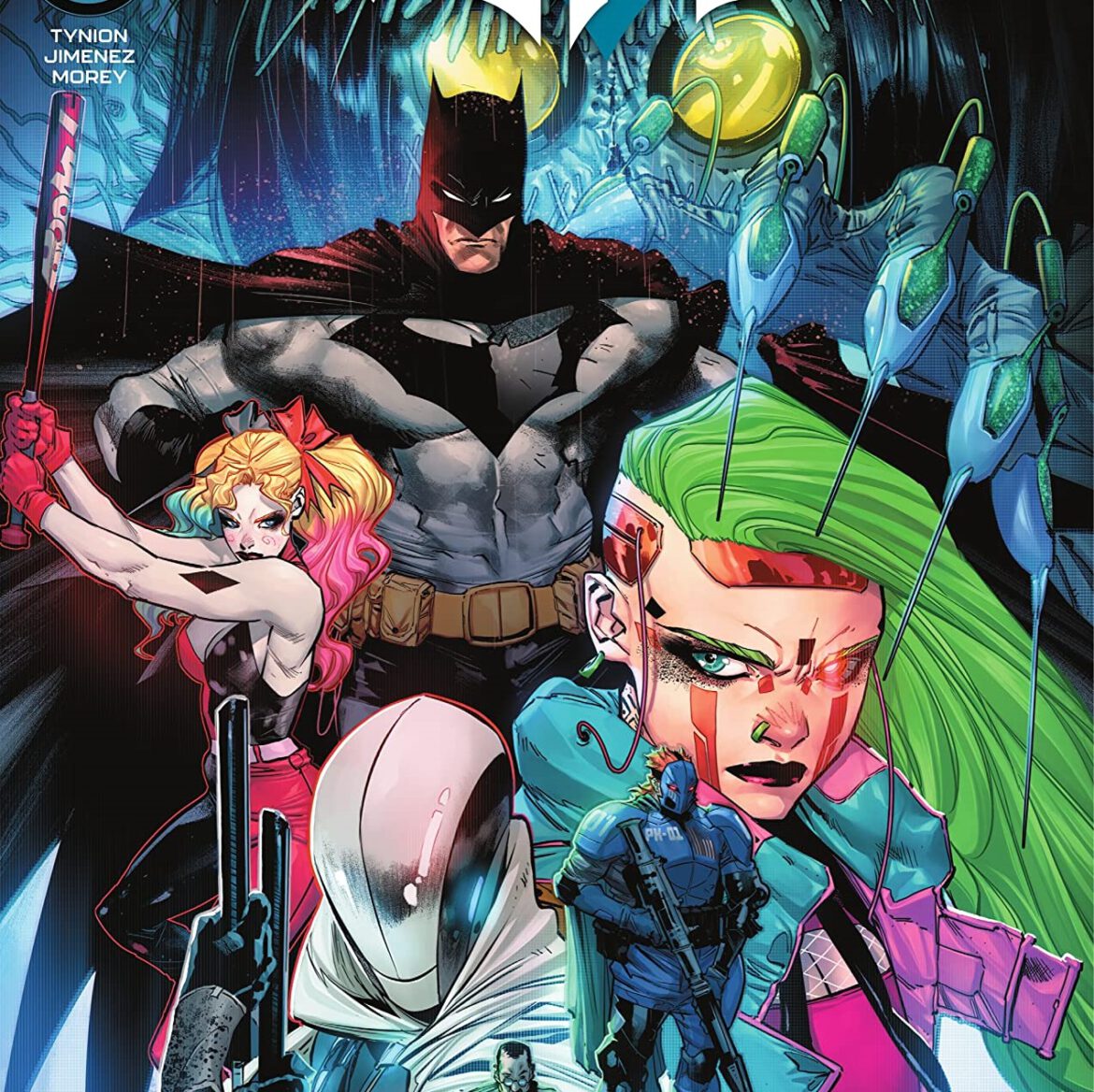 Synopsis: Batman #112 opens with Batman trying to escape from Scarecrow’s clutches. He flees, but he fully admits that he thinks he’s losing his mind, that Scarecrow is in his brain somehow. Batman calls out for help but to no avail.

Meanwhile, a promotional video for Saint Industries, narrated by Simon Saint, highlights Simon’s origins and why he has set out to change Gotham for the better. It plays in the background while Simon works on a piece of tech. In the video, Simon details why he felt the need to step in after Joker War, which feeds into why the Magistrate is the perfect answer to help save Gotham City.

Batman makes it out of Arkham Asylum and stumbles to the Batmobile. He doses himself with an antidote to the fear toxin, but it doesn’t seem to work, as Scarecrow appears before him once more. There’s a crash, and Batman passes out.

Sometime later, Batman awakens, and all seems well for the moment. He radios back in, calling for backup.

An interview plays out on TV where Simon Saint explains why the Magistrate program is necessary. He explains that peacekeepers aren’t meant to replace the GCPD, they’re meant to handle costume crime since police officers are better equipped for the normal crime. Also, peacekeepers are fully accountable, which makes them better than Batman and the Bat-Family.

On Saint’s Magistrate headquarters UFO that’s hovering above Gotham, Simon vomits onto the floor. He’s stressed, but with the help of his assistant Ricardo, he pulls himself together and rallies his employees to take charge. This is their moment to assume control of Gotham. They own the airwaves, but they need to find Peacekeeper-01 and stop Scarecrow.

On the streets, Peacekeeper-01 reels from the fear toxin. He sees the citizens of Gotham, but in his visions, they’re all dead. Bystanders take notice of him, but under the spell of fear toxin, these bystanders look like they’ve been gassed by the Joker. Peacekeeper-01 screams about being the hero to save this city and starts to open fire on the “infected” people around him.

Atop the Clocktower, Batgirl (Cassandra Cain) surprises and subdues Batman. She’s surprised he’s still alive. Barbara Gordon and Batgirl (Stephanie Brown) appear. Batman tells them that Scarecrow threw his game off. Barbara catches Batman up to speed, telling him about how she’s been hacked, communications are down, and that there’s an “anti-Oracle” poisoning the minds of Gotham citizens. Batman asks her to patch him through to Ghost-Maker, whose Ghost-Net is still online.

Ghost-Maker tells Batman that Queen Ivy has allowed the Unsanity Collective, Harley Quinn, and himself the ability to stay with her beneath Gotham. Her roots are everywhere, and Ghost-Maker warns that she could collapse Gotham at any minute. Harley and the Gardener will try to find a missing piece of Ivy to return her to normal, but in the meantime, Ghost-Maker has been asked to meet Batman to help heal his mind.

Elsewhere, Simon Saint tells Ricardo that there is a dire need for an off-the-books peacekeeper who can bring Peacekeeper-01 in. Though the prosthetics he has to offer are cruder than he’d like, Simon uses them to transform Ricardo into Peacekeeper-X.

Analysis: If you read last week’s Batman: Fear State: Alpha #1, this week’s Batman #112 is a more exciting riff on the exact same setup. Once again, we learn why Simon Saint is so invested in this idea of the Magistrate and how it’s his goal to transform a broken Gotham. We also are reminded of the many different plot elements in play — namely Harley and Gardener trying to “fix” Poison Ivy, Batman regrouping with the Bat-Family in the wake of them losing both their communication devices and computer systems, and Simon Saint struggling to bring in a fear-stricken Peacekeeper-01, who is creating chaos in Gotham.

Unlike last week’s special issue, Batman #112 brings with it some excitement and tension. A video promo of tech giant Simon Saint, who dresses/looks a little like Steve Jobs, is shown juxtaposed against a broken Batman, desperately fighting his way out of Arkham Asylum. Artist Jorge Jimenez brings his A-game right out of the starting gate. One of the first pages shows a full-page panel of a frantic, terrified Batman clinging to the walls of Arkham while a scarecrow looms large behind him. In the next few pages, Jimenez jumps between Simon Saint, Batman, and these nightmare visions of a truly mortifying Scarecrow hijacking control of Batman’s senses. Colorist Tomeu Morey switches up the colors between the juxtapositions, blending a calm and serene blue with a green and grey and a violent explosion of red and orange. Each color palette pops in its own right, and together they put on quite the display, unsettling us by lulling us into a calm with one palette and alarming us with another.

That said, the needle hasn’t moved much from Batman: Fear State: Alpha #1. For half of the issue, we’re given a brief summary of where our characters are at, which is superfluous for those who read the special one-shot last week. The art, however, is magnificent, and the introduction of Peacekeeper-X is stylish and tantalizing. It’s a fun issue, yet one that retreads plot points in a way that’s much more exciting and visually engaging.

Synopsis: The backup in Batman #112 begins as Clownhunter fights a losing battle against Scarecrow while mentally kicking himself for declining to join the Bat-Family or accept their help. After falling off a building, Clownhunter awakens in an older woman’s apartment with an IV in his arm.

The woman offers Clownhunter some tea, then asks if he remembers her. She refreshes his memory by telling him that he saved her from some clowns three weeks back. Clownhunter tells her that the clowns keep coming back because “we let them come back.”

Clownhunter is startled by her knowing what he’s about to say. Just then, the woman begins to morph into something larger, talking about how everything connects and comes around again. Clownhunter grabs his bat, just as the woman morphs into a giant Joker-like monster. She asks Clownhunter if he remembers how he got here.

Clownhunter asks who caught him, and the monster tells him that no one did. He awakens, still falling into the chasm between Gotham’s skyscrapers.

Analysis: While not much happens in this first (of three) Clownhunter backup stories found in Batman #112, it’s a welcome surprise for readers to see a secondary story that relates to the events in the main story. In this backup, a brash Clownhunter learns to regret pushing away the Bat-Family as he loses a battle against Scarecrow. He’s been dosed with fear toxin, one that taunts him with a larger-than-life Joker when he passes out while falling off a rooftop.

The art is fun and kinetic, very much in character for Clownhunter. Jason Howard brings an edge to the backup that feels both distinct and indicative of Clownhunter’s perception of reality. It’s a great touch, one that makes this story feel more personal.

Again, not much happens, but this backup does hopefully set up a narrative wherein we see Clownhunter brought back within the fold of the Bat-Family. He clearly regrets pushing them away, especially when it wasn’t just Batman he pushed away.

Batman #112 is a retread of Batman: Fear State: Alpha #1. However, whereas Alpha was a bit of a snooze, this issue brings a stylish and visually engaging tone that makes it much more exciting.