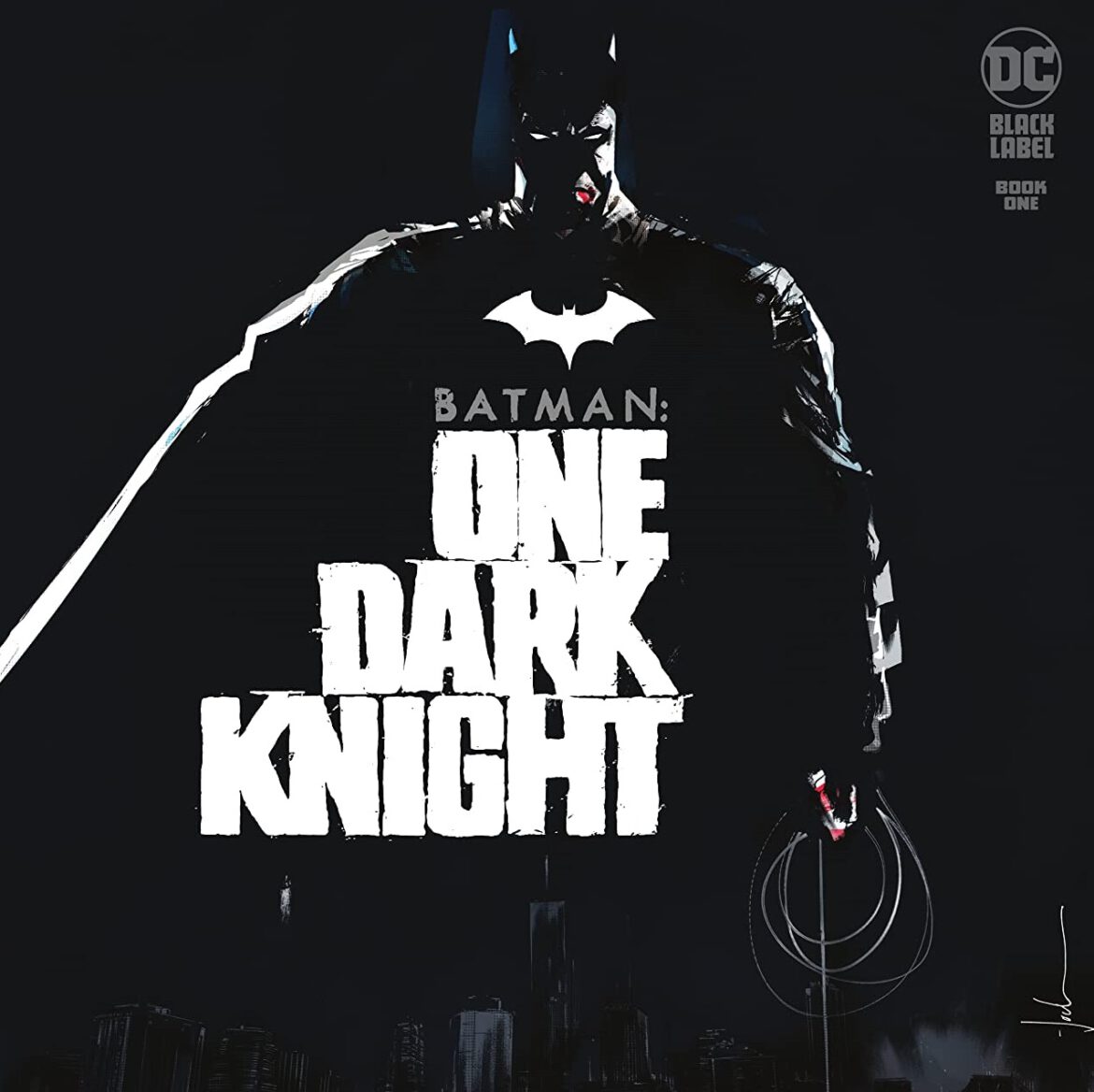 Overview: In Batman: One Dark Knight #1, Batman sets off on a dangerous mission to guide E.M.P. from Arkham Asylum to a special new containment facility at Blackgate. Then the lights go out in Gotham City and virtually all of Gotham’s gangs are after the pair.

Synopsis (spoilers ahead): As Batman: One Dark Knight #1 begins, it is high summer in Gotham, and Gotham City Police Department (“GCPD”), Arkham Asylum, Blackgate Prison, and Batman are all preparing to transfer a rogue with the moniker of “E.M.P.” Batman is in the Bat-plane, and via its path multiple Gotham City gangs are tracking E.M.P.’s progress in a Faraday truck to prevent signals from escaping. Batman is nevertheless tracking E.M.P.’s vitals. It is six and a half miles from Arkham Asylum to Blackgate, and Alfred is monitoring feeds from all over the city.  Clashes and violence are being reported all over, but the prisoner is secure and stable.

Meanwhile, Renee Montoya and the head of the Gotham City Prison Bureau, Rita Vasquez, head to a midtown hotel for a reception. Commissioner Gordon is present. Vasquez gives a speech in which she mentions advances in containment that permit them to transfer and hold securely the “metahuman” Edward M. Pressler. As she professes, a pair from the Z-Boys gang aim a rocket launcher at the truck. Alfred warns Batman that E.M.P. has awoken. The truck takes a direct hit and some of the Z-Boys move in. They are at first surprised by the lack of resistance and are then surprised by Batman. Batman locates E.M.P. in the truck, tells him the Z-Boys are trying to kill him, and manages to extricate him but is blown aside by a second rocket attack.

Vasquez halts her “tough-on-criminals” speech and informs Gordon of current events. They argue.

E.M.P. is moving ahead of Batman, who is chasing him across rooftops with a portable Faraday device. But E.M.P. is already interfering with radio signals and Alfred is cutting in and out. As they move across fire escapes, an adolescent boy named “Brody” sees them and his eyes begin to glow red. Various gang members hear that E.M.P. is “out,” and they mobilize. Officials at Blackgate are aghast when they hear what has happened, warning that E.M.P.’s levels are spiking and alluding to the terrible events of the last time he was “out in the open” – five years prior. As the Bat-Signal illuminates, Batman continues to chase E.M.P. through Midtown, while Vasquez and Gordon continue to their argument over the wisdom of transferring E.M.P. Gordon says that he knows what happened to Vasquez’s family and suggests that this is personal.

E.M.P. is getting stronger and moving faster. The Bat-Signal is fading. Multiple gangs have converged and are firing on Batman, who cannot reach E.M.P. before he finds a power line. A great ball of yellow-orange energy suffuses E.M.P. as he easily repels a kick from Batman. The building on which they are engaging sustains massive damage and communications with Alfred sever. A giant explosion occurs and suddenly Gotham goes dark. GCPD police cars crash because the brakes go out. Brody runs out to the rooftop to see all of the lights out across the city.

Batman awakens below to find E.M.P. lying nearby, the Faraday device apparently working to stabilize him. Batman readies himself. The task: cover the 4.6 miles to Blackgate with all of the electricity out in Gotham and no less than thirteen gangs all searching for both he and E.M.P. (there’s a nifty map!). Batman hefts E.M.P. on his shoulder and sets out.

Analysis: I have been eagerly anticipating this book ever since DC announced the series back in July. I think that Jock is by a fair margin the best black-and-white artist of Batman currently working. Thus, the prospect of a three-issue, prestige-format Black Label series highlighting his gorgeous shading and linework in a Gotham without light filled me with glee.

I was slightly less enthused about the prospect of Jock writing the story as well as producing the art since, in my view, the results of artists penning stories have been mixed at best since Rebirth. Fortunately, the story thus far is solid. The premise itself imparts a sense of dynamism and movement at every moment. Even when Vasquez is merely giving a speech at a midtown hotel, you know the convoy is moving, Batman is moving, and virtually all of Gotham’s gangs are also moving. We don’t know much about E.M.P. at this point, but apparently, the Gotham underworld really wants to get their hands on him – some to kill him, and others for as-yet-unknown purposes.

Jock does not try to do too much with the story in Batman: One Dark Knight #1 and for me, that is a big win. The chronology is sequential, the settings are well-marked, there are multiple maps to aid in comprehension, and despite several storylines, they all converge (both literally and figuratively). There is nothing mind-blowing in the writing here, but there does not need to be. Everything makes sense and pushes the narrative along nicely.  I am interested in Batman’s compassion towards E.M.P., who seems less an incarnation of evil like Joker and more confused by what he has become. I do want to learn more about his backstory and possible connection to Brody.

Jock’s art is stunning. Most of the first issue is colored since E.M.P.’s “intervention” only takes place towards the end of the book. But I adore the way Jock draws Batman, and I think that in particular, his integration of bats into the panels and Batman’s costume is unparalleled among contemporary Batman artists.

All in all, the first issue in this series does not disappoint. There are no real flaws here; the writing is solid, the pace is exciting, and the art is outstanding. I cannot wait to see Batman move through the shadows of Gotham in the next issue. Black Label books have been uneven, but at times, some of the entries reach real heights (e.g., Harleen), and One Dark Knight looks poised to take a place atop the label’s very best.

You should read it, I loved it.