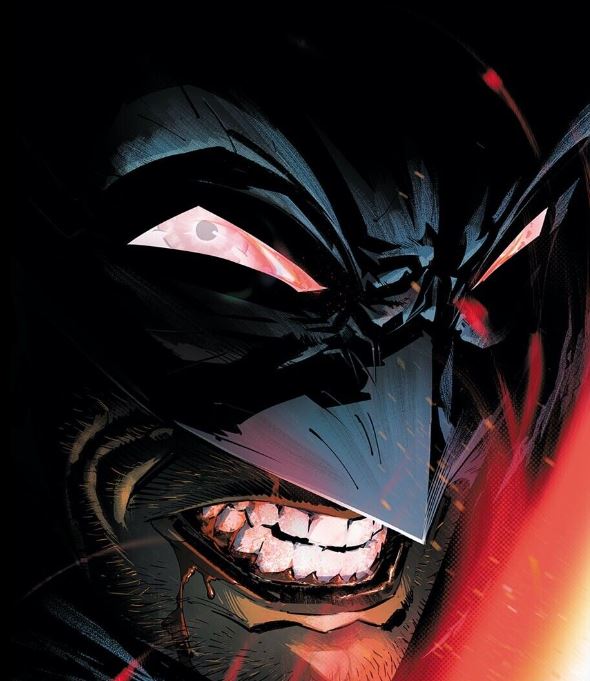 Overview: In Batman #127, the Batman of Zur-En-Arrh and Robin battle Failsafe in Wayne Manor! In the backup story, Catwoman solves her Cobblepot inheritance mystery.

In the present, in the Batcave under Wayne Manor, Robin (Tim Drake) meets the Batman of Zur-En-Arrh, Batman’s subconscious failsafe personality stripped of Bruce Wayne. This Batman has been called upon by Bruce to save everyone because this version of Batman is the one who created the murderous, rampaging robot known as Failsafe.

Batman of Zur-En-Arrh deleted the memories of how he created Failsafe, so Batman and Robin get to work in trying to solve the problem. Suddenly, Failsafe arrives. Batman and Robin engage the robot, with Robin trying to convince Failsafe that Batman was framed for Penguin’s murder (see Batman #125).

Back at the wreckage from last issue’s battle, Commissioner Renee Montoya tells Nightwing she can’t keep avoiding Mayor Nakano’s calls about the incident. Trusted emergency crewmembers heal members of the Bat-Family who have been taken down while Nightwing talks with Oracle over the comm. It turns out that Failsafe planted bombs that are now going off to distract the Bat-Family. Oracle and Nightwing agree that they need backup to fight Failsafe.

Batman of Zur-en-Arrgh and Robin take the fight upstairs to Wayne Manor, and they struggle to defeat Failsafe. Bruce, watching from the back of Zur-en-Arrgh’s mind, sees that even a pure Batman can’t stop Failsafe. With Robin’s life in jeopardy, Bruce assumes control once more and saves “his son” from Failsafe. Bruce then tells Robin to get away and call for help, running back in to finish his battle with the machine.

Batman tries to find weaknesses in Failsafe, but he fails, getting pummeled by the robot in the process. He makes his way to the grand staircase, seeing visions of Tim Drake, Dick Grayson, Jason Todd, and Damian Wayne running down the stairs. He thinks of his sons as death beckons him. Bruce collapses to the ground. Just then, Superman arrives.

Analysis: Batman #127 is an action romp wherein the Batman of Zur-En-Arrh tests his mettle against a rampaging machine of his own creation, Failsafe. This issue is a very visual-heavy extravaganza of action and mayhem, and Jorge Jimenez and Tomeu Morey really shine here. Jimenez delivers some absolutely astonishing linework, and Morey’s colors are stellar, as usual. The one thing Batman #127 does very well is in delivering a battle worthy of readers’ eyes and attention.

However, the story comes across as a little silly. To be sure, there are some moments of heart interwoven into this nonstop action. Bruce referring to his Robins as his “sons” is heartwarming, and his visions of them before collapsing are tender and touching. The whole meat of the story is something else entirely. Bruce summons the Batman of Zur-En-Arrh in Batman #126 to bring about Failsafe’s end in this issue (because Zur-En-Arrh created Failsafe). Zur-En-Arrh, unfortunately, “deleted” the memory of him creating Failsafe, and his battle against the robot fares no better than Bruce’s.

It can be said that the whole theme and idea of this issue is that a Batman inhibited by Bruce is as perfect of a Batman, if not a better Batman than the uninhibited Zur-En-Arrh subconscious. Despite this theme, the meat and action of it comes across as rather silly. It lacks the emotional punch to make the fight feel important and less of just a gorgeous way to fill pages.

Batman #127 isn’t the biggest letdown, as the story is bookended by a Superman moment with a callback. In the opener, Superman doubts Bruce’s claim that Superman and the Justice League are Bruce’s failsafe if Batman ever went bad, but as revealed in the final panel, this claim is proven true by Superman’s arrival. Rather, the bulk of this issue feels more like busywork to connect the opener with the closing moment, leaving readers with the notion that Bruce is the ultimate Batman and that Superman and the Justice League, not Failsafe, are the ultimate safeguard for peace if Bruce was to ever lose himself. Ultimately, it’s an okay third act to the Failsafe story, albeit not as exciting as the first two acts.

Synopsis: In Metropolis, a man by the name of Paul Meredith leaves a bakery and heads back to his flower shop. Catwoman comes calling, outing Paul as Oswald Cobblepot, the Penguin. It turns out that the money Cobblepot left to a bird sanctuary went to a shell company for “bird supplies” that was owned by a modest florist named Paul Meredith, a man who recently had a nose job.

Oswald tells Catwoman that he wants out of the Gotham scene, that he’s done with being a night animal. He tells her that Batman is an addiction they all have and that for a while, he wanted nothing more than revenge. But now, Oswald just wants his life to himself. He didn’t intend for his kids to kill each other. Rather, he thought they’d bond.

Catwoman agrees to keep Oswald’s secret, but she tells him that Aiden and Addison Cobblepot will pay for murdering their siblings. Oswald understands, but when Catwoman leaves, he hopes that his two surviving children give the Bat and the Cat hell.

Afterward, Catwoman spends the night in Metropolis and ponders her own place in Gotham. She’s not ready to leave it yet, but perhaps she can break some cycles of her own.

Analysis: It was a tough pill to swallow that Penguin died in Batman #125, but writer Chip Zdarsky and artist Belen Ortega worked hard in the last two backup stories to sell this idea. It turns out, Penguin isn’t so much dead as he is retired.

The end of this three-part backup story finds Catwoman confronting “Paul Meredith” (Oswald Cobblepot with a nose job and bleached hair) and revealing the switch. She agrees to keep Paul’s secret, thus letting Penguin buy himself out of a life of crime in Gotham City. What makes this confrontation interesting is Penguin’s idea that “all” of Gotham’s rogues are addicted to Batman, and it seems like this idea will be explored further in future Batman issues.

Batman #127 is a bit silly, but it serves well enough as a vehicle for asserting Bruce Wayne as the ultimate Batman while also making Superman the ultimate safeguard for Bruce’s missteps.