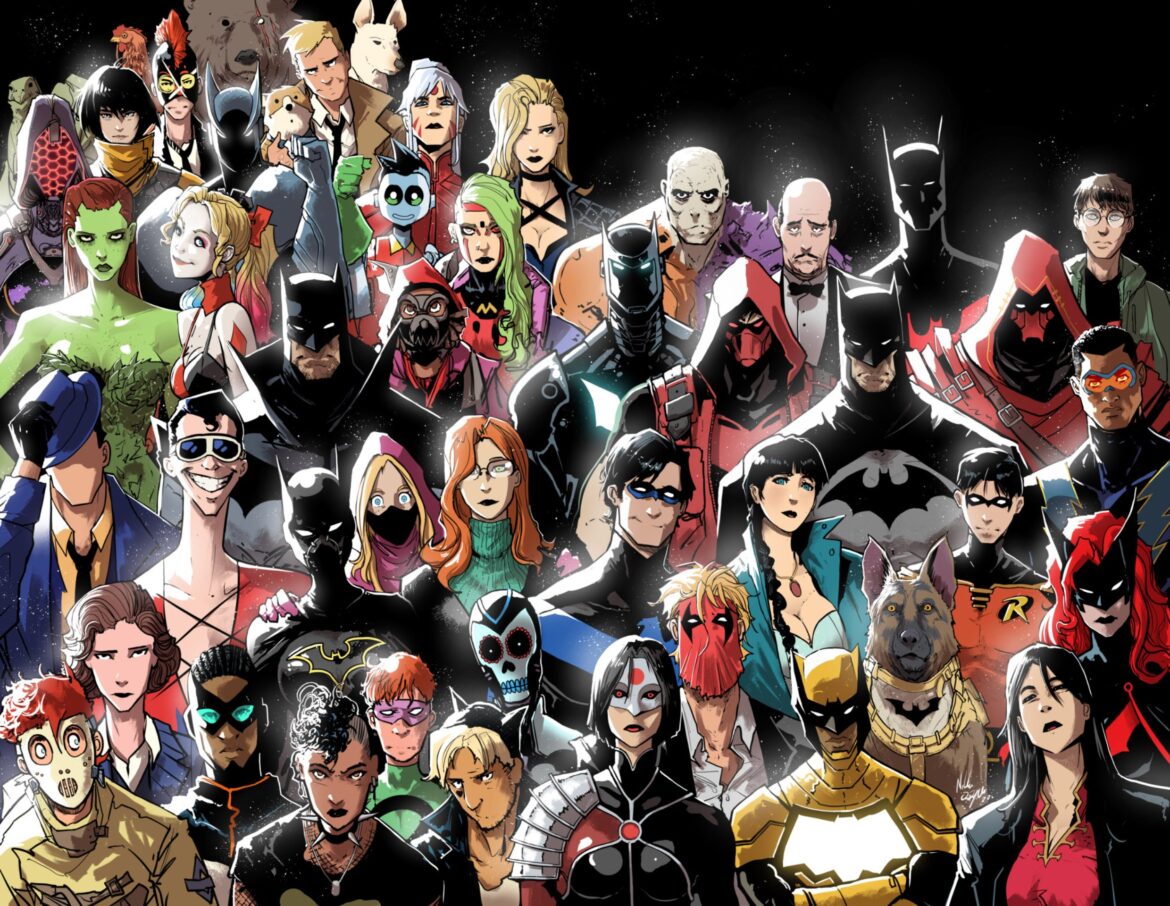 Overview: In Batman: Urban Legends #23, we see stories featuring the Nightwing, Robin, Arkham Academy, and the conclusion of The Murder Club story.

Story #1: Nightwing in “The Director” Part 2 by writer and artist Jamal Campbell

Synopsis: The first story in Batman: Urban Legends #23 begins in Blüdhaven at Sanctuary Park. We learn that Nightwing with the gas scene is another of the Director’s films. Dick and Babs banter; Babs has traced one of the films to Trafalgar, a local media arts college. Later, Nightwing discusses Marcel with Derek Coleman and gets a lead to the Southern Orlandeau Community Center.

In disguise as Marko Moon, Dick gets another clue and follows some of the people from the Community Center to a job they are working at an abandoned movie lot. As he observes the scene, a dart strikes his neck, and he passes out. He wakes up hours later with the people on the job. Their hands are tied behind their backs, and they are all frightened. The Director’s voice announces the beginning of his newest feature. They are in a labyrinth and must escape before the “Beast” finds them, who turns out to be Flamingo.

One party member down, the group flees in terror. Dick manages to get Flamingo to slice his bonds, but he is still drugged and struggles to evade his assailant. Flamingo stalks his prey, and Dick hunts the predator. They clash, and Batgirl swoops in to assist. One of the party thanks them, but Nightwing and Batgirl name her as the Director, a Trafalgar student named Christine Eigawa. Derek Coleman tries to shoot her, but Nightwing and Batgirl prevent it.

Outside, Nightwing speculates that Eigawa could not have managed all of this by herself, and a figure in a double costume mask watches the scene on a large screen, drinking a glass of wine.

Analysis: Again, this does not feel like the most original or compelling story, but at least the fundamentals of the narrative are solid. Nightwing and Batgirl work well together here, and the art is excellent. There are no heights reached here, but it’s a decent two-shot and, despite its relative lack of ambition, definitely serves as an example of the kinds of work that could have anchored Urban Legends as a more consistent book.

Synopsis: The second story in Batman: Urban Legends #23 takes place during Robin’s second year in Gotham. Batman reminds him of the rules as the Dynamic Duo rushes off. Batman comes to as Robin is driving the Batmobile away from an unseen foe from above that is doing everything possible to destroy the car.

The foe is Firefly, and he has the Duo cornered. Batman rages at Robin for disobeying Rule #1, which is to leave Batman if it looks like he is going to die. Robin patiently explains what it means to be partners and references his parents and the Haly Circus. Batman quietly acquiesces, and Robin jumps the car directly into Firefly, destroying the car in the process and injuring Batman.

Later, in the Batcave, Robin asks Batman how he performed. Batman chides him but acknowledges that he could not be happier with Robin as a partner and family. But he reminds Robin that he won’t be driving the Batmobile anytime soon.

Analysis: Akin to the first story, this solid story amplifies a familiar message in the relationship between Batman and Robin. It is short, simple, and effective.

Synopsis: Killer Croc has killed Li’l Kitten. As he removes the muzzle, the rest of the class realizes they are armed or have powers that can be effective and go on the attack. They take Killer Croc down, and Scorn is called into the principal’s office. She reveals that the entire episode was planned to illustrate that they are never fully safe. She reveals herself as a member of the group behind Arkham Academy: The Court of Owls.

Analysis: I like The Court of Owls, but there is little to appreciate in this story.

Synopsis: The final story in Batman: Urban Legends #23 sees Batman remembering Crime Alley. The “Judge of Owls” stalks his memory, explaining that she needed to purge the Court of Owls. The Judge is manipulating time and planning to use John Starr to kill Joe Chill – thereby preventing Batman from coming into existence. The Court of Owls has sentenced Bruce Wayne to life.

Batman, Robin, and Nightwing attack the Judge and her Court. At the Batcave, Thomas and Martha are frightened and order Alfred to take them to the scene. As sirens sound at the fight scene, the Judge and her Owls are distracted, and the Bat-Family takes advantage to finish the fight. Batman tells Alfred to take his parents back to the Batcave and briefs Jim Gordon before rushing off.

Back at the Batcave, Batman repairs the time malfunction, and the countdown begins to the Waynes’ departure. They speak warmly, and Thomas apologizes for his anger. Both he and Martha refer to Batman as Bruce and ask him for a ride in the Batmobile. Batman obliges, and as they watch the sun setting over Gotham, Thomas tells him how proud he is of the light that Batman shines for Gotham.

As they return to Crime Alley for the Waynes’ departure, they say goodbye to Robin and Nightwing and remind Batman of the importance of family. They recede into the light and are gone.

The next day, Robin and Nightwing find Batman alone on top of Wayne Tower as the sun sets. Batman is ready to work, but he stops to thank Robin for his willingness to sacrifice himself and Nightwing’s perpetual choice to pull Batman out of the darkness. He apologizes for the life he feels he has thrust upon them. Robin and Nightwing upbraid him gently, and Batman remarks that his father and Nightwing both reminded him of what Gotham has given him – not just what it has taken. They work as a family. The trio soars off to round up the rest of the Owls.

Analysis: This is a genuinely beautiful, heartwarming story. The return of the Waynes in the current timeline is handled with care, respect, and reverence due to the characters. The story here is a classic bildungsroman, except that it is not just Batman who is forever changed, but all of the characters in the story. The resolution for Thomas is stunning – he realizes the full power of what his son has done, who he has become, and what it means for all of Gotham. The dialogue rings authentic, and every conversation between these critical characters strikes deep emotional chords for anyone remotely involved in the Bat-Family and The Batman Universe.

The linework from Georgiev is excellent and classic, as befits this utterly classic story. The characters are skillfully rendered, and the emotion courses across Batman’s face, even under the cowl. Hearing Thomas and Martha refer to Batman in cape and cowl as “Bruce” is stunning in its own right, for no other characters in the story other than perhaps Alfred would have the authority to confuse the main character (Batman is the true identity and Bruce Wayne is the costume – but not to Thomas and Martha Wayne).

This is a beautiful story, skillfully done, and it made me tear up on more than one occasion. Although Urban Legends has, on balance, been disappointing, this terrific story is an ideal way to close the run and a winsome reminder, perhaps, of what the book could have been. The finale of the series seeing Batman, Robin, and Nightwing soaring off into the Gotham twilight with the Bat-Signal illuminated and smiles on their faces, is a lovely send-off.

Three out of the final four stories in the book are solid, and one story is incredible. I will remember “Murder Club” for a good while. Although I cannot honestly say I am sorry to see the book end its run, it has been an honor to review it!