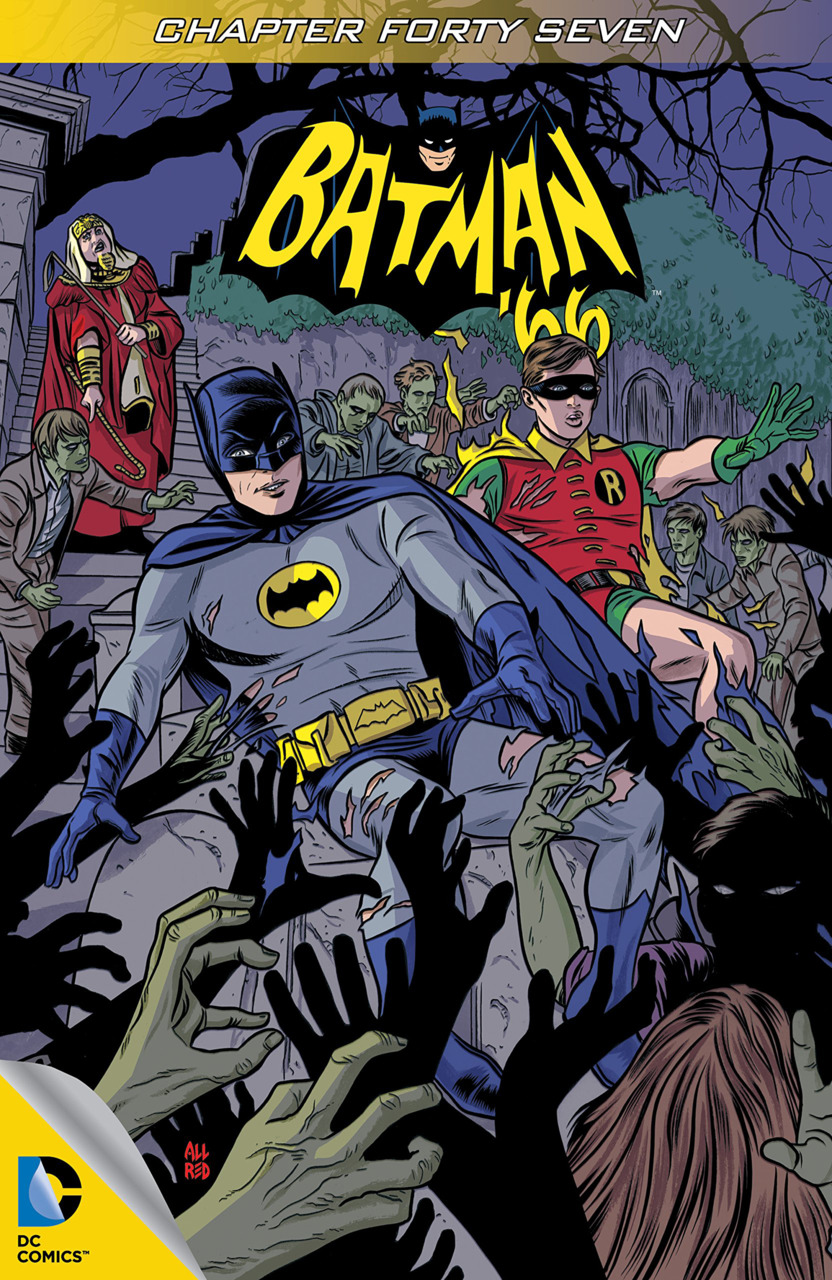 “The Osiris Virus” opens upon the campus of Harvard University, where a visiting professor Dr. McElroy is getting toured around by the deans. While the group is walking, the students are busy playing games that involve throwing objects around…clearly a danger to the multiple personalities of McElroy. While discussing some of his findings, McElroy takes a croquet ball to the head and loses control over to his villainous King Tut persona.

Meanwhile, the Caped Crusaders are busy battling Bookworm and his mechanical Emily Bronte-saurus…however Batman remarks that a well placed batarang has closed the escape valve on the boiler inside the machine. After an explosion that results in Bookworm’s capture, the Dynamic Duo is alerted to the events at Harvard with the timely arrival of Chief O’Hara and Commissioner Gordon.

Located in his secret hideout, Tut is busy preparing his next caper which involves a rare item that he uncovered within a temple dedicated to Osiris. Tut explains that after uncovering the temple, he found several urns that contained the organs of Osiris’ servants…and upon examination of the remains discovered a deadly virus to control the living. Taking to the Sarcarphagus, Tut discloses the rest of his plan – he intends to gas the citizens of Gotham with the virus, and this will cause the people to rise up as his slaves.

The following day, Batman and Robin are still searching for King Tut but stop quickly at a drive-in for some batburgers. However they are quickly called away when Tut’s location is discovered. Donning their gas masks, the duo race onto the scene to see Tut gassing the citizens of Gotham near Cemetery Park. Following a brief chase, the Batmobile corners the sarcarphagus inside the park…however Tut reveals that the gassed citizens have turned into zombies, who are quickly advancing upon the two crime fighters.

This was a pretty interesting issue of Batman ’66 and I’m looking forward to seeing how Batman and Robin deal with a horde of zombified Gotham citizens. I thought it was intersting to show two different villains in this issue, as typically each chapter only has one a piece. It was nice to see that while everything was happening with King Tut, Batman and Robin was busy battling Bookworm.

The writing was definitely well done throughout the story, and a few of the jokes had me laughing…the constant threat at the beginning of the issue with Frisbees, footballs and croquet balls flying around was funny to watch – you just knew that one of them was going to wind up smacking McElroy in the head and turning him into King Tut. Also, the Emily Bronte-saurus was a nice touch for Bookworm…as well as having the dynamic duo sandwiched in-between the covers of a giant version of “Wuthering Heights.”

I’m not sure how I feel yet about the whole zombie thing. I do like the use of this in other mediums, but I’m not sure if it’s becoming a gimmick and starting to seem overused. Although their explanation is grounded within an ancient virus, it’s seems a little too outside the box for Batman ’66. However this could be the point, as somehow I’m okay with a giant robotic dinosaur attacking Batman and Robin…but have slight misgivings regarding “zombies.”

My other slight concern is with the art. Although the majority of the issue looks good, and as always the DC Squared feature is expertly utilized, it seems that the art is somewhat blurry. Certain panels look slightly out of focus with the rest of what is going on and it was somewhat distracting.

Overall I think this was another interesting issue for Batman ’66, and I’m definitely looking forward to Batman and Robin dealing with King Tut and his zombie minions.