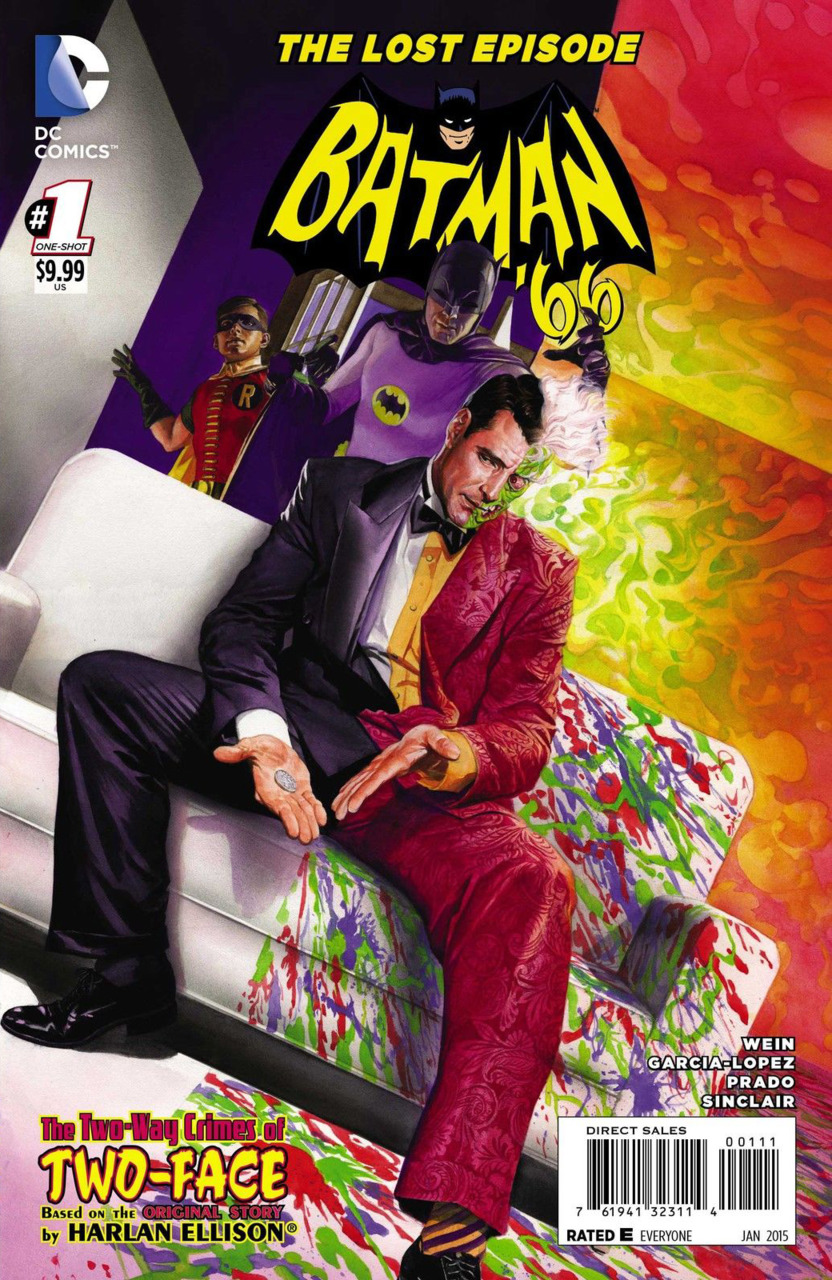 This lost episode of Batman ’66 opens at the famous Northby’s Auction House where a near complete set of Chang Dynasty Blue Porcelain Glazes are the item of the evening. However the night is soon interrupted when one of the staff member’s faces begin to melt…it turns out that the villain known as Two-Face has been disguised in order to swipe the valuable items. The villain and his henchmen quickly make a getaway with the goods, and the scene cuts to GCPD headquarters where Commissioner Gordon phones in the theft to Batman and Robin.

The dynamic duo arrives at the scene but is quickly bewildered when a pair of St. Bernards arrive with the completed set of Chang Porcelains. It seems that Two-Face’s coin had come up unscarred and he was compelled to return the items with an upgrade. The duo then return to the Batcave to deduce where Two-Face will strike next, and we are treated to the origin of Two-Face – similar to his other origins, Harvey Dent was in a court room prosecuting Boss “Lucky” Maroni who eventually hurled a vial of acid at Dent. Batman, who was present, sprang into action and attempted to block the strike but was too late. Becoming scarred and donning the moniker of Two-Face, Dent took Maroni’s lucky coin and scarred one side of it.

Over the course of two weeks, Two-Face continues his crime spree with the caped crusaders narrowly apprehending him on several occasions…and even stranger, some of the loot is returned at the following theft. Eventually the two heroes have the Batcomputer calculate two possible locations on where Two-Face would strike next. Batman and Robin split up and check out their respective locations. Batman is the lucky winner, and a chase ensues between Batman and Two-Face…however the latter quickly pulls ahead but not before Batman launches an infrared Bat-tracer.

Realizing that he is at the wrong location, Robin arrives at Batman’s target and follows the Bat-tracer trail left by Two-Face. Meanwhile at the abandoned Lunar Observatory, Batman crashes in through the skylight and begins to battle against the henchmen…however Two-Face quickly pulls a double barrelled shotgun on Batman. A quick flip of the coin holds Batman’s fate, however the coin lands on edge and Batman distracts Two-Face and launches back into the fight. Robin soon arrives but slips on some empty shotgun shells and crashes into Batman…the villains use this mayhem to flee.

The duo return home to attempt to uncover where Two-Face has escaped to…and thanks to an errant clue shouted out before his departure, the caped crusaders clash once again with our villain at Gotham Yards. Another vehicle chase ensues, this time batcopter versus speed boat…but the boat quickly disappears beneath an island. Batman then launches himself into the water and follows the boat into a hidden cave. Hidden aboard an ancient pirate ship, the issue ends with Batman sword fighting against Two-Face but eventually gets captured…the coin is flipped yet again and lands on edge once again (unbeknownst to Two-Face, Batman had switched his real coin for a weighted one during their fight). Two-Face ends up surrendering following this event due to agreeing to let Batman take him in if the coin landed on edge once again.

This was a pretty decent issue. I really enjoyed how the ’66 writers had attempted to bring in Two-Face into the continuity of their show.

This “Lost Episode” was based off of the original story written by Harlan Ellison and was slated to be shown during the initial run of the ’66 TV show, however the script was never filmed.

One can definitely see the classic Batman ’66 feel of the show throughout this story, and it was a nice twist to see a brand new villain like Two-Face. His origin story is practically the same, just with a few name changes of some of the characters. As for Two-Face’s gimmick, I found it both funny and a little strange that based on his coin flip it could result in Two-Face returning the items that he stole.

However, I felt that this issue was not as funny as other issues have been in the past, but this could be due to having a different writer onboard. I’m also curious to see if Two-Face will ever reappear within the pages of Batman ’66.
Overall this issue was quite interesting and a definite must read for any Batman ’66 fans. However, be prepared to spend $10 for this issue. On the plus side you get a good story as well as some great extra features like the original non-inked/non-colored art, and the original treatment for the episode, but it costs $10! Due to the price my rating will dip slightly.