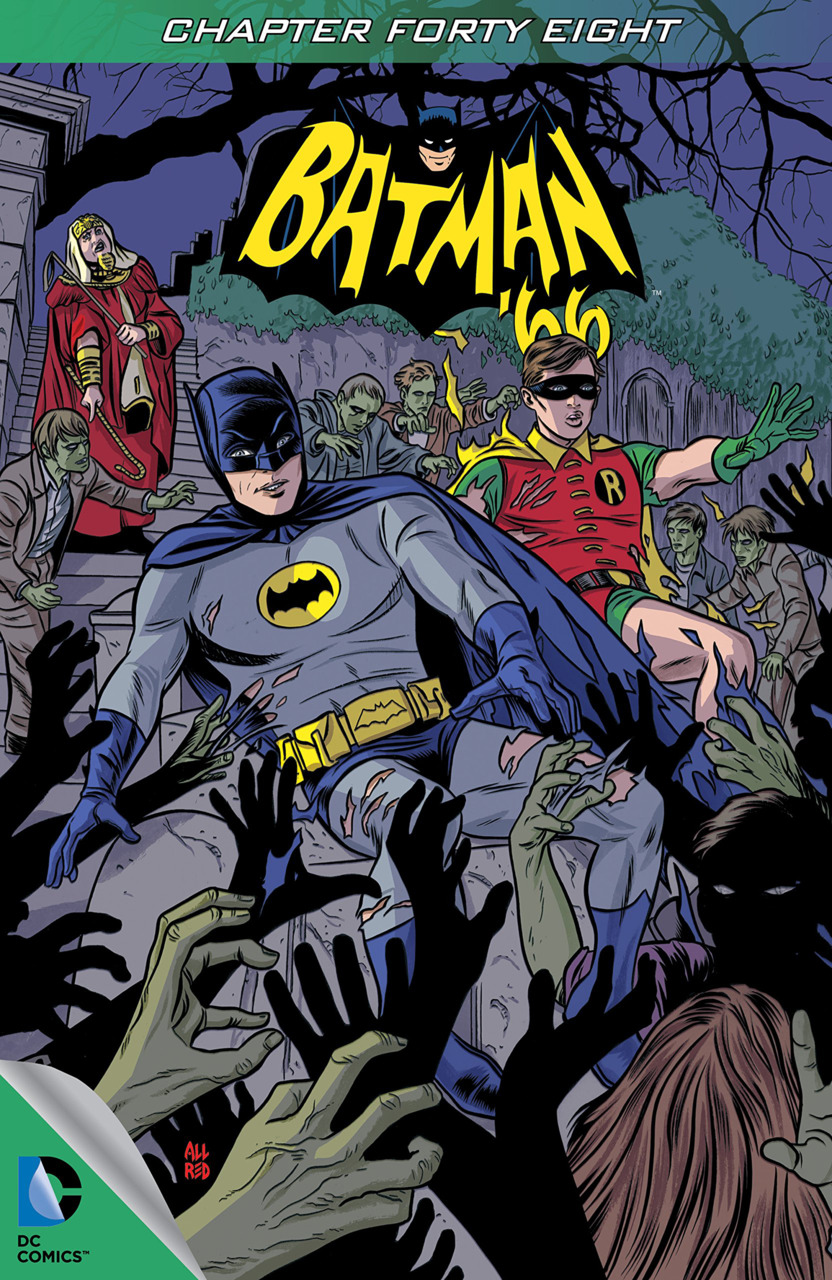 “The Osiris Virus” concludes in this chapter. We last left our heroes facing off against a horde of infected zombies at Gotham Cemetery. The caped crusaders attempt to fight off the horde, but seem to hold back due to the zombies being innocent infected citizens of Gotham. King Tut decrees that the duo will be buried alive and he speeds off in his sarcophagus. The zombies slowly push towards the heroes who eventually back up into an open grave with a tombstone that reads “Here Lies the Dynamic Duo 1966-1969.”

Meanwhile across the city, Tut continues to gas and infect many of Gotham’s citizens and turn them into a horde of evil zombies. At GCPD, Gordon gets many calls involving the events of what is going on and turns suddenly to see Chief O’Hara has been zombified!

Back in the graveyard, Batman and Robin are finally pushed into the open grave and we see the zombies pick up shovels and begin to bury them alive.

The scene then cuts away and shows Gordon meeting up with the Mayor who is attempting to fight off zombies with the Key to the City. King Tut arrives and explains that Gordon and the Mayor will work for him, but he will rule over Gotham. However the Batmobile speeds onto the scene and Batman and Robin jump from the car. The duo reveal that they simply waited for the zombies to finish burying them, as the gas masks they were wearing had a 20 minute oxygen supply…then they simply dug their way out with batarangs. Tut laments that he never waits around to watch them die to ensure his success. A bat fight then ensues where Batman and Robin quickly dispatch King Tut’s henchmen.

With Tut disarmed, Batman and Robin attempt to take him in…but Tut reminds them of the horde of zombies under his control. Batman quickly pulls out his Bat-Guide to Egyptian Potions, Lotions and Notions and informs everyone that sunlight will cure anyone infected by the virus…the legend of the zombies only describe them walking at night. Batman’s hypothesis comes true as the sunlight of the new dawn causes everyone infected to return to normal. King Tut relents and allows himself to be taken into custody.

The conclusion to “Batman and Robin vs. Zombies” was really well done. Although the deus ex machina at the end of the issue was a little too convenient, I found that it did work within the setting of the ’66 universe.

I think that the comedy and Easter eggs in this story were truly the highlight. The background is littered with Batman references – tombstones with the names of Brand, Craddock and Cyrus Gold are all seen in the graveyard; additionally we see a billboard for Matt Hagen starring in a movie called “The Mud Pack.” I also wanted to mention that zombie Chief O’Hara was hilarious, still spouting off his quick one liners.

The art is still kinda weird, everything seems a bit fuzzy and blurry like it did last issue. It kept making me think that I had forgotten to put on my glasses when I was reading.

Overall I liked the ending to this story and even though zombies are starting to get a little overdone in the media, Batman ’66 handled them quite well…and made sense that King Tut would be the one to conjure them up.