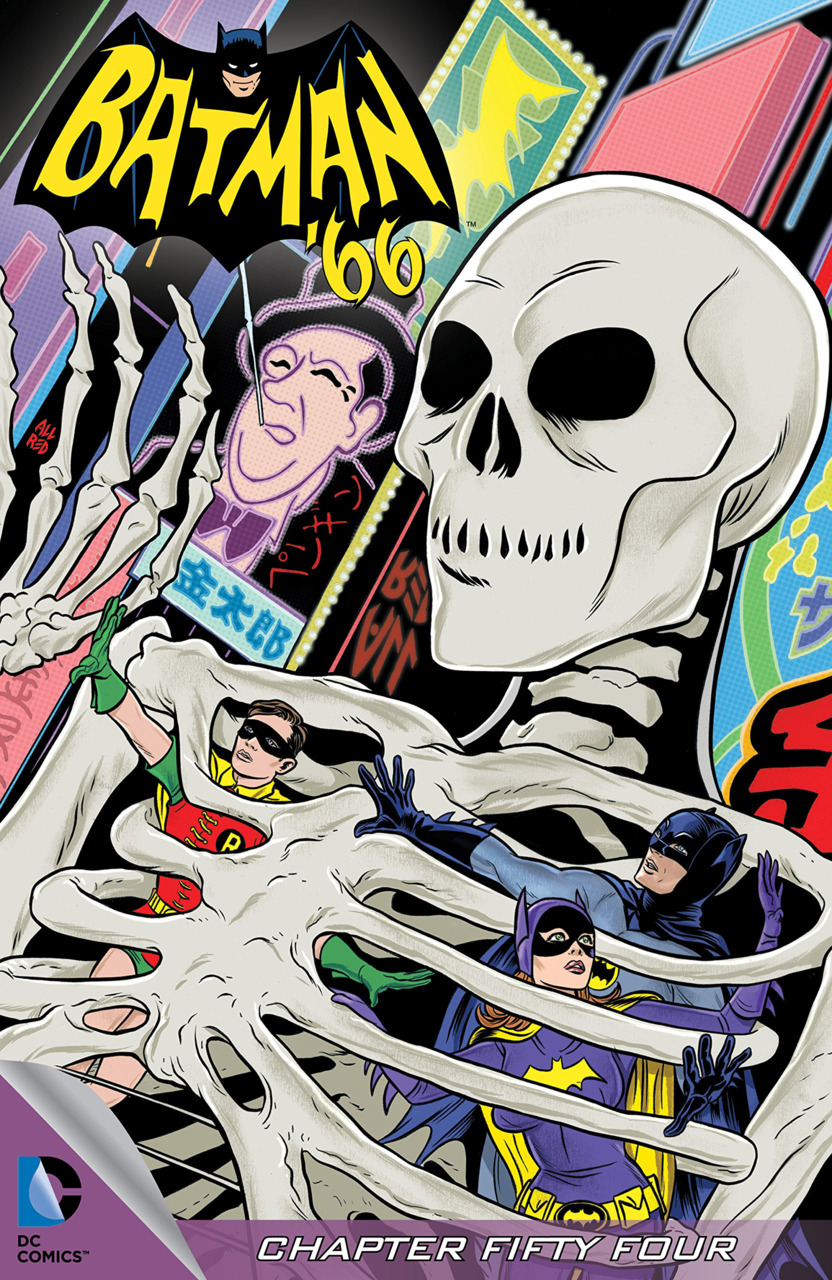 This week’s digital chapter of “Batman ‘66”, The Garden of Death, opens with the Dynamic Duo battling against the pudgy purveyor of perfidy – The Penguin. While ensnaring Batman and Robin with a gyroscopic umbrella trap, Batman manages to unsheathe a batarang and hurl it at the villain knocking him out. Tumbling to the ground, the Boy Wonder lands on his head while Chief O’Hara and Commissioner Gordon apprehend Penguin. The crime fighters then discuss a duffel bag that Penguin was trying to bring onboard a plane bound for Japan (all of the previous fight takes place at Gotham Airport). Upon opening the bag, the Caped Crusaders discovers nothing but chrysanthemums.

Sometime later, deep beneath Stately Wayne Manor, Batman and Robin discuss the flower petals and what they could possibly mean to the Penguin. Robin meanwhile seems to be suffering from acute vertigo thanks to the fall he sustained. Batman decides to let the Penguin’s bag make it onto the plane and plans to follow it to its destination…however with Robin unable to help, Batman decides to enlist aide from the dazzling dare doll Batgirl.

We then cut to the top of police headquarters where Batman has changed the batsignal to shine a fuchsia colored bat symbol into the sky. Batgirl then arrives and she agrees to accompany him and apprehend the culprit – Lord Death Man.

Aboard the plane bound for Japan, Batgirl and Batman discuss how he believes Lord Death Man to be the one to receive the flowers. Batman then explains that white chrysanthemums (the flowers Penguin was sending) typically are associated with death.

After their arrival, the two crime fighters are welcomed by a Japanese man and are brought to a hangar where the Batmobile-J is ready for their use. The man explains that it has been built to Batman’s specifications and can be used to track the duffel bag from the airport. As the two speed off, they follow the tracking signal within the bag and are forced to destroy a giant boulder that comes down in front of their path. Eventually they follow the signal to a garden with a sign hanging above its entrance that translates into “The Land of the Dead.”

Upon entering, the two are met by an elder woman and Batgirl asks if she witnessed two men entering carrying the bag. She admits that she did and asks them to follow her. As the elder guides the two heroes through the garden, she explains that a man had purchased the grounds and uses it as a place to gain secrets…she then brings them to the two duffel bags and notes that the contents have changed. As Batgirl and Batman stare down they see the skeletal corpses of Batman and Robin staring back at them. With a quick turn, the duo see that the woman has shed her clothes to reveal Lord Death Man underneath…he then explains that the true purpose of the bags was not the flowers, but to lure the Dynamic Duo to him. The chapter closes with several ninjas descending into the garden preparing to fight Batman and Batgirl.

This was definitely a step up from the previous story that saw Batman battle against Jokerman, and I am glad to see Jeff Parker returning to the writing duties this week. Overall I enjoyed that we got out of Gotham City in this tale, something similar to when Batman and Robin went off to London to battle the Mad Hatter. I also liked that Batman teams solely with Batgirl…although it sucks that Robin got sidelined in this story, I feel that Batgirl always seems to be an awkward third wheel when she teams up with them.

Overall this was a really good issue and I am looking forward to Batman and Batgirl battling against a very different character than ones we have seen before. Lord Death Man has previously been showcased mainly in the Batmanga, as well as making appearances in the first volume of “Batman Inc.” I am looking forward to seeing how Batman takes down this immortal foe.