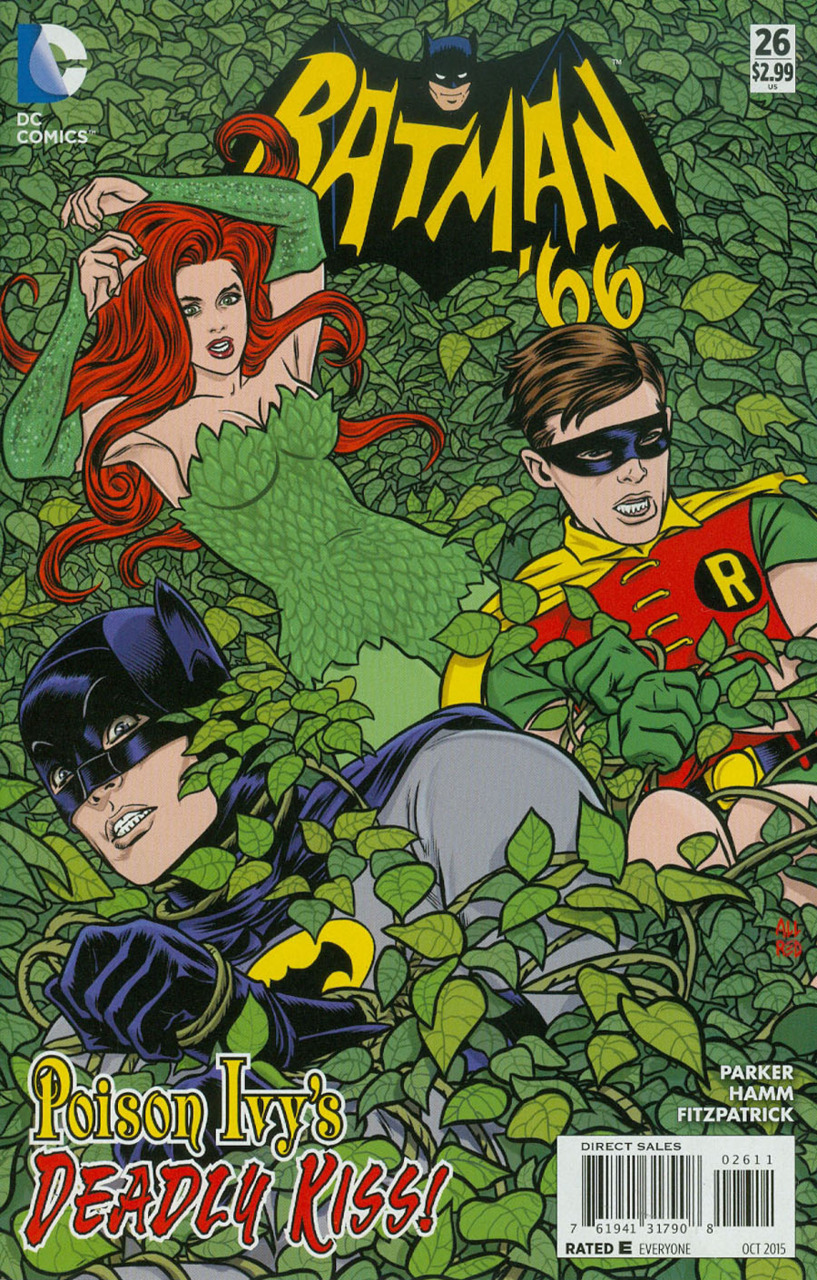 Batman and Robin face a harrowing horticultural harpy hell-been on a horrible heist in the latest installment of Batman ’66 #26.

Our story opens with Batman, Robin, Commissioner Gordon, Chief O’Hara and a handcuffed man around the apparently dead body of Louie the Lilac who has been the victim of foul play. Louie is laying on a pile of flowers with a single lipstick kiss on his cheek and a Lilac in his hands. Back at the Batcave, Batman discovers that the lipstick is a compound made of poisonous plants which must have caused Louie’s demise.

The Dynamic Duo ask Louie’s partner, the handcuffed man in custody, where Louie got his signature lilacs from. Louie was heading out in secret at night and the Caped Crusaders discover that the old Isley Nursery is likely the horticultural source. Batman breaks into the nursery and recalls visiting years ago when he was a boy. At that time was given a rose by a red haired girl, the daughter of the proprietor. Apparently her father, Dr. Isley, was made sick from poisonous nettles which caused the nursery to close.

Batman and Robin realize that though the nursery is supposed to be shut down, but the greenhouse is still being used. He doesn’t put it all together before they are captured by vines that move as if they are alive. The resident of the greenhouse emerges. She is a red haired woman in a Green Giant outfit, Poison Ivy. Batman accuses her of supplying Louie with his lilacs, which she admits. She explains that Louie decided that he didn’t want to pay for the flowers so Ivy taught him a lesson.

She had been developing a serum to turn plant pods into henchmen. Ivy is angry that the university didn’t help her dad out when he was sick so she is going to get revenge on Gotham. She directs the vines to drop the Dynamic Duo in to a Jupiter Flytrap. Ivy swoons and sends Batman and Robin to their possible death. Luckily for our heroes Batman has a capsule of concentrated herbicide on his utility belt which causes the flytrap to release them.

Ivy and her thugs are robbing the bank and afterwards decide to go to a club. Ivy enjoys herself dancing when Batman and Robin arrive to fight her and her gang. Ivy escapes on a giant walking tree which Batman climbs to confront her. The tree no longer responds to Ivy’s commands because Alfred is driving the Batmobile with a giant grow lamp mounted on the back. The tree is following him to jail.

They want to arrest Ivy for murder, however she points out that Louie only has been paralyzed. She revives Louie and Batman praises her skills with plants. Ivy responds by kissing the Caped Crusader.

As usual, Batman ’66 is a light enjoyable piece of fluff. The action is simple and direct and full of the pop imagery of the ’60s. You can really hear Adam West and Burt Ward’s voices in the dialogue. The gags are familiar and the art is clear and fairly well done. I enjoyed the dance panels but the walking tree looked a little silly.

This particular adventure isn’t the strongest one in recent issues but it is serviceable and is a successful nostalgia delivery vehicle if nothing else. There really isn’t much bad to say about it except that there really isn’t anywhere this book can go. It will never deal with anything serious and so it will never be great. But it also is always entertaining and succeeds at its modest goals.