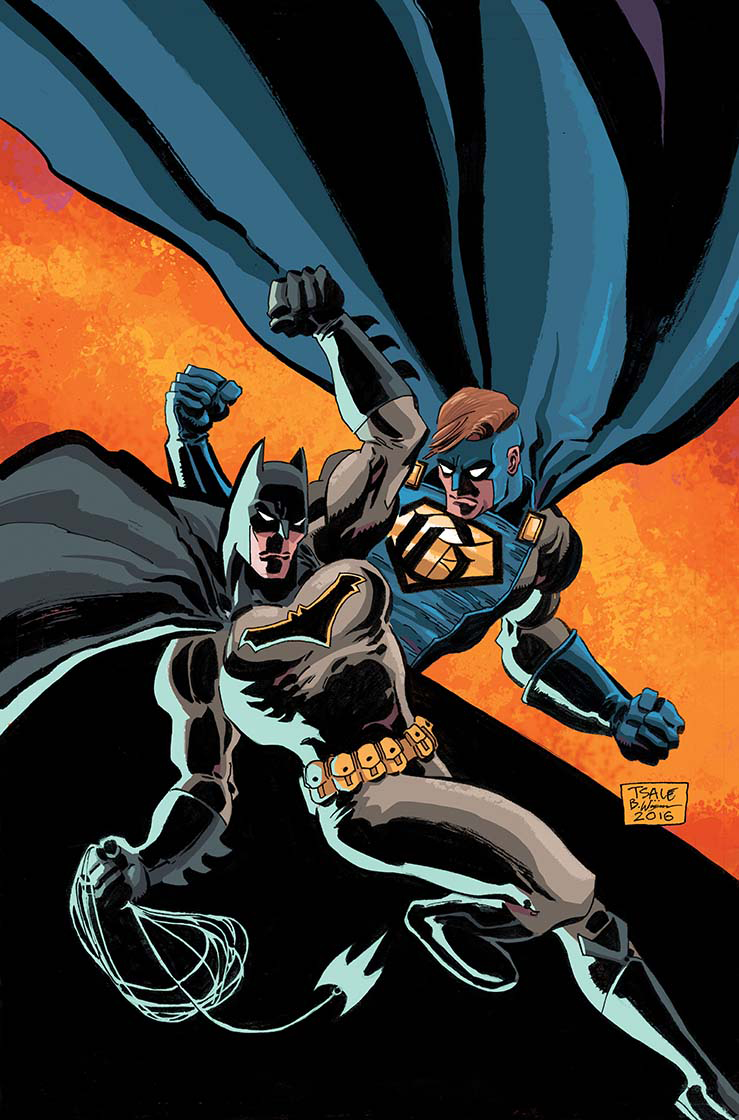 Our third interview from Comic Con, took place with with writer Tom King. King is no stranger to The Batman Universe as he previously worked on Grayson with Tim Seeley. After wrapping up their run on that title earlier this year, King was announced as the new writer for Batman. At this point, we have had about four issues released, with another issue releasing today. The series has been getting high marks from both the reviews on the site and on The Batman Universe Comic Podcast. We had a chance to talk with King about his run on the series and what we can expect in the coming months. TBU: So, as we enter this new era of Batman with you at the helm, how would you describe him as a character moving forward and this current story.

Tom King: Can I stop and say thank you for interviewing me. You don’t know how much I appreciate that.

TBU: Thank-you for giving me the time!

Tom King: I’ll talk fast. He’s met the Gotham-Gotham Girls. There are these two characters that represent, in his mind, almost an idealized version of himself. They have powers he’ll never have. They survive the experience that almost killed him, the death of his parents. So, now he has hope in them. He has hope that they might be something special, something that can be the answer for the question that–what kind of super hero does Gotham deserve? Maybe they don’t deserve someone dark and broken like Batman. Maybe they deserve someone like Superman. The problem with Gotham City is hopes tend to get crushed. When that hope gets crushed, when his faith in those people might not turn out as well as he thinks it does, what does Batman do? That’s the challenge to him. That’s the challenge to the psyche of this character. The idea is to make this big and as fun as possible, and just show you some kickass Batman.

TBU: There’s a certain danger level with Gotham City and Batman and he can mostly take care of himself against these villains, but there’s now this idea of escalation because you bring in these super powered heroes. Is that going to change the whole climate of Gotham City and start bringing in new villains that then match their power level?

Tom King: I want to make it slightly to be–I think the idea behind Rebirth is to unite this universe again, and to make these stories matter in the classic sense of continuity. I’m a big continuity nerd. I didn’t want it to be like, “Okay, Gotham City is where all the crime happens and Metropolis is where all the asteroids fall.” That makes no sense, right? So, there’s crime in Gotham City and there’s asteroids that fall on Gotham. I think Batman has to come to grips that he can’t always be the hero that does that. Maybe he can be, and if he is, if he is the hero of Gotham, what makes that special? I wrote this first issue where he’s on a plane that’s crashing, he’s about to die. The whole story in the next whole year will be about that moment where he’s like, “I can save the city, but to save it I have to die. I have to leave Damian without a father. I have to leave Dick without a friend.” What does that mean to him as a person? Plus, there’s Kite Man coming.

TBU: Are you serious? TBU: Kite Man. That’s great! Are you going to–that’s a classic rogue. Any other obscure, C-list villains that you’re going to bring in or want to bring in?

Tom King: I get into all these deep, dark themes, I just want to say, but also there’s these awesome–Condiment King has an appearance.

Tom King: He’s coming. Tweedledee and Tweedledum are going to do some stuff.

Tom King: We’ve got some things going on, yeah.

TBU: This is going to be like classic. I’m even more excited than I was reading it.

TBU: This is great. Speaking of Damian, is he going to appear in your book at all?

Tom King: Damian is in Teen Titans, right? I want him to build that world there, because to me, Teen Titans growing up was one of the greatest DC books of all time. So, we’re going to give him a little space to grow. Because, again, I want continuity to flow and if I put him in my book then he can’t be as good as he is in that book. So, the focus of Damian is on the Teen Titans. I mean, he exists and there will be overlaps and there’s a big crossover event coming. Because when they fight these Monster Men, basically Hugo Strange, he’ll need all of his family. So, there are Damian appearances. But I want the focus of Damian to be on the Teen Titans which is going to be amazing.

TBU: You end the last issue with three big hitters. You’ve got Sam Lane, you’ve got Waller, then you have Hugo Strange. What are these three up to? What are they doing together? Tom King: Right? Waller, Lane, Hugo Strange, and Psycho Pirate. That’s a Justice League villain, a Batman villain, a Superman villain, and a Suicide Squad, whatever Amanda Waller is. That’s amazing. That’s the DC Universe in one room and Batman’s not there. What those people are talking about will have the impact–that’s the yearlong story that takes place in three trilogies. The first trilogy is called I Am Gotham. The second one is called I am Suicide. Batman forms his own Suicide Squad from Arkham Asylum where all those awesome villains come from. Then, the third one is I Am…something I can’t tell you, which will be what this is all leading up to which is the biggest battle in Batman’s history. It’s him against a bad guy and one of them can’t be on this world anymore.

TBU: In regards to James Gordon, will we see how his time as Batman has affected him? Then, also how is his relationship with Batman in your book?

Tom King: Yeah. I mean, he was in issue two, and I love writing him.

TBU: Right. With the Bat-signal.

Tom King: And the pipe. We gave him the pipe back.

TBU: Yes. Thank you. His lungs probably don’t thank you, but it’s good to have classic Jim Gordon back.

Tom King: Yeah. I love classic and I wanted to start with classic. So, yeah. I think his relationship with Batman is actually fairly stable. I wanted to start this book–and Scott and I agree with this, and I called Dave Finch who is my artist on this and partner. We also agreed that what we wanted was to go back to classic. When we think classic, we think animated series, first season like just Gordon on a roof and that classic relationship. We need to just start it there. When you close your eyes and think of what Gordon and Batman feel about each other, that’s where we are at this point. So, we start there. Now, all of that’s going to fall apart as this year goes ahead because that’s what comics are. It’s a tearing apart of something to see the strength of it. That’s what we do in comics.

TBU: Will we see Julia Pennyworth at all in your book?

Tom King: Not for a while, but I have a plan for Julia. She’s has a secret origin that nobody knows about. I think, can I leak it a little bit? There’s a secret relationship between Julia and another major DC character, but I can’t talk about it. So, we’re going to eventually bring that out.

TBU: Okay. Talk about Duke Thomas a little bit. Batman has kind of given him reigns. “You do what you need to do.” So, what can you tell us about what his journey is going to be like or what his plans are and what that suit means to him?

Tom King: So, I grew up a huge Tim fan. One of the things I loved about Tim was that he didn’t just immediately become [Robin]. He did a year in the cave first. So, that’s what I wanted to do with Duke. He’s doing his year of training. Because if a guy just shows up with Batman and suddenly he’s on the roof with him the next day, that doesn’t really make sense to me. I think that I wouldn’t really risk that because you wouldn’t risk someone’s life who is not ready for it. The story of Duke’s training, that’s what All Star Batman is. That’s what Scott Snyder is doing. So, once that training comes along, Duke will assume a new role in Gotham that’s going to blow people away. I know what it is. I know what the name is. I can’t talk about it.

As mentioned earlier, you can pick up the first issues of Batman now and Batman #4 is in stores today. Thanks again to Tom King for giving us the time to discuss the awesome stuff coming up in Batman.