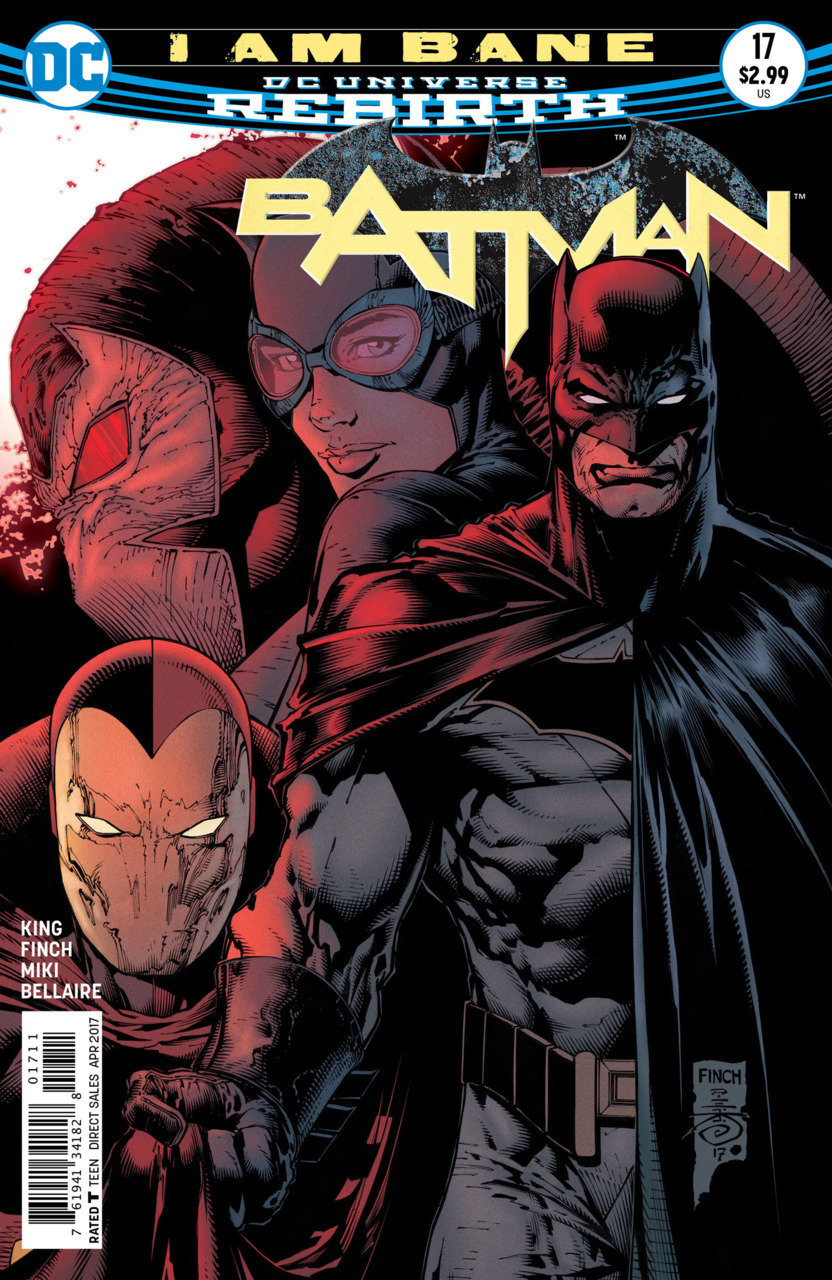 I’m going to give in to my fanboy nature and tell it to you like it is.  I want to love “I Am Bane.”   I want it to be required Batman reading.  Ten years from now, I want to look back fondly on this moment and recommend King’s run to people just starting to discover comics.  I’m just not there.  I absolutely loved the past several issues of this title, but I’m back to my lukewarm feelings with the second installment of this story arc.

This will be a quick recap as there is more set-up than follow-through.  The Bat-Family members Bruce knew would attempt going after Bane  (Dick, Jason, and Damian, of course) are safely tucked away in Superman’s Fortress of Solitude.  At least until after Day 5.  We’ll see, though.   Alfred Pennyworth infiltrates Arkham Asylum by posing as Jeremiah Arkahm with Gotham Girl in tow (posing as a freshly-caught Hush).  There they begin the intense treatment with Psycho Pirate to get back her courage.  While this is all happening, Bane’s plan is getting put into place as his henchmen starting picking off Batman’s nearest and dearest.  Bronze Tiger, Catwoman, Duke, and Gordon are all taken out with relative ease, then presented to Batman atop Arkham Asylum by Bane himself.  Roll credits on Day 2.  For real, the amount of references to time make this feel like an old episode of 24.

I love the aesthetic of this story.  It is dark and moody, with a lot of character.  This is owed mainly to the art team in general, but especially the incomparable Jordie Bellaire.  Between her work and Danny Miki’s inks, Finch’s art is really presented well.  I’ve never been a fan of his facial expressions, but he really is trying to mix things up here.  I have to give him credit for that.  Panels are still somewhat busy and it isn’t always clear how the action is progressing.  I think if he were able to step up his panel layout and continuity game he could really make an impact on the reader.

Tom King, though.  Tom King.  There are a lot of stretches of the imagination here.  I can understand Duke and Gordon’s defeat as it’s implied, Bane helped with that, but I don’t see Bronze Tiger or Catwoman getting taken down with such ease. For that matter, I’m not sure what’s happening with Bronze Tiger.  Is he in venom withdrawl?  I don’t recall him having such trouble in the last issue.  Speaking of the last issue, we didn’t get closure to the cliffhanger.  It seems like the bodies in the Batcave were Dick, Jason, and Damian, but that was all glossed right over.  We would have benefited from seeing more of the immediate aftermath instead of the smash-cut to the Arctic.  As always, though, Tom King has his moments where he shines.  Background dialogue is always on point and humorous, and whenever he gives Alfred or Gordon a monologue I forgive him for something.  He has a great deal of talent, which makes a lukewarm review such as this that much more difficult to write.

I’m committed to this story, of course.  I have the highest of hopes.  I just need to see some progress.  I feel like the art and the story are disjointed.  The level of clarity isn’t what it needs to be.  Maybe there’s a communication issue between the parties.  Maybe there’s not.  The end result is still a wonderfully cinematic, if flawed, story that I’m not going to give up on.