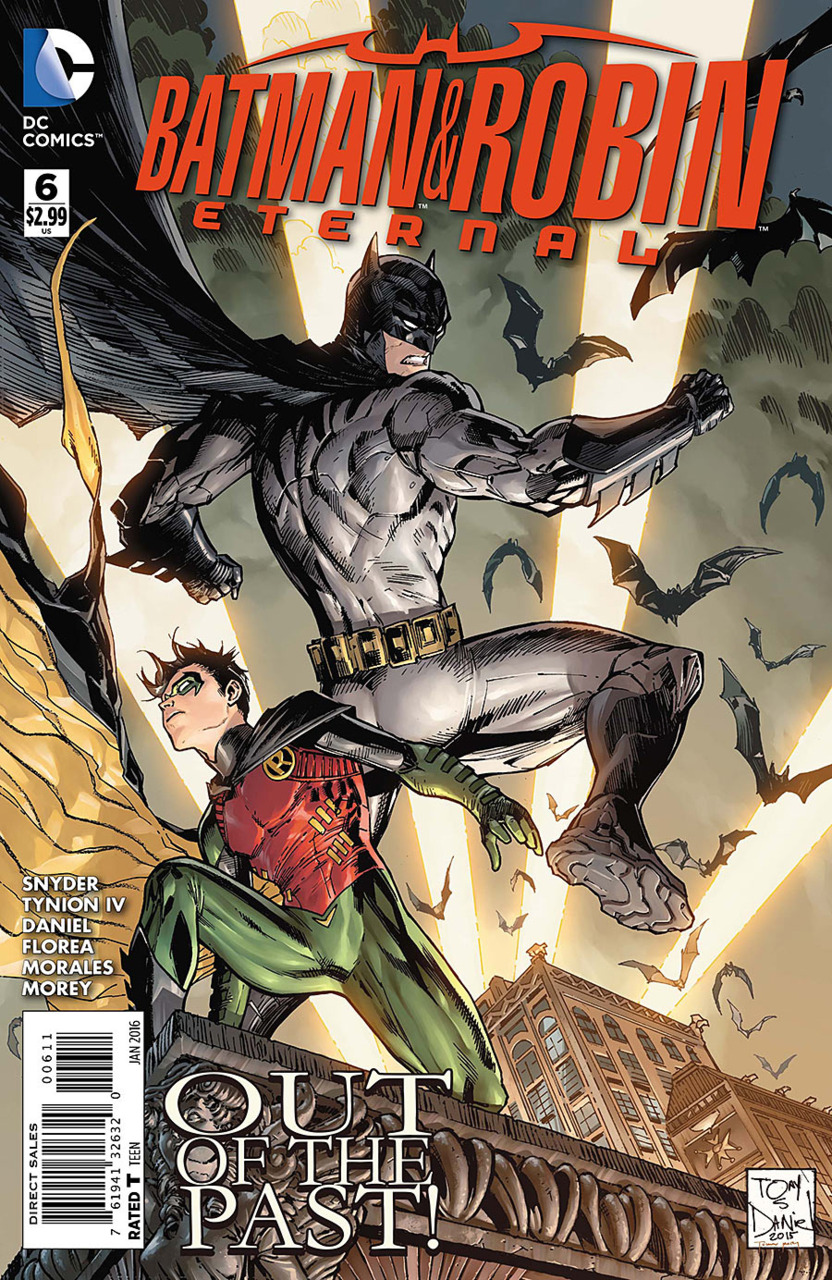 In the past, discovering Mother’s operation forces Batman to consider his own actions.

After Dick Grayson and Tim Drake’s (Red Robin) conflict last issue, Dick is talking to Jason Todd (Red Hood) about seeing Bruce Wayne without his memory in issue #4. He expresses that he wanted to ask why Bruce didn’t tell him about Mother when Dick was Robin, but couldn’t. While both of them examine the church where Cassandra Cain and Harper Row encountered the Orphan last night, Jason tells Dick that Tim figured out that Mother’s brainwashing apparently works using some kind of broadcast signal, and that he and Tim are going to track down that lead. Dick says that this church, the same location that he and Batman tracked the Scarecrow to years ago, served as a training facility for the Orphan and Cassandra.

In the past, Batman and Robin track Scarecrow to an airfield, where Dick attempts to stop the plane in midair, but Scarecrow has left a decoy, and nearly blows him up. Batman catches him in the Batplane, but when they return to the Manor, Dick trains himself brutally, punishing himself for failing. Bruce assures him that he did not fail, and wants him to check for Scarecrow’s fear toxin again.

Above the Batcave in the Manor, Bruce mingles with the police fundraiser party guests, meeting a real estate magnate named Maxwell Dossey. Dossey teases Bruce about his loner ways and his adoption of Dick, then tells him an incredible story about his wife Alicia. He purchased her from Mother with a backstory completely made to his own order, for $40 million. When Bruce objects to the unsavory nature of this human trafficking and brainwashing, Maxwell retorts that his adoption of Dick seems similar. However, Maxwell sees a tall, burly man with short dark hair (possibly the Orphan, given what happens next) watching the two of them, becomes terrified, and tries to pass off his revelations as a joke.

After the party, Batman researches Maxwell’s wife and the name “Mother,” and finds nothing. But when checking on the Dossey home security cameras, he sees the Orphan sneaking in. Rushing to save them, Batman is too late, but he does discover the true identity of Alicia – a child whose parents were deliberately murdered to create a person for sale. He worries that Maxwell was right – that by making Dick Robin, Bruce has done the same thing as Mother. He tells Dick to come with him to Prague, but doesn’t tell him about Mother.

In the present, Dick and Jason part ways, with Jason reminding Dick that the Robins need to trust each other, and form new allies. Dick, who originally was going to leave Harper and Cassandra alone in a new apartment for their safety, instead picks them up in his Spyral plane to go to Prague and retrace Batman’s steps.

Meanwhile, in the shadows, Mother and Orphan discuss the heroes’ movements. Orphan expresses concern, but everything is going according to Mother’s plan…

After four issues of action, James Tynion, the show runner of this series, steps back in to provide a summary and new trajectory. Tony Daniel also returns to provide a sense of continuity at major story turning points. While Daniel provides the sole pencils for the issue, the three separate inkers (including some pages inked by Daniel himself) does sometimes give the art a feeling of disjointedness.  Additionally, the figures look less assured and solid than in the first issue – during Dick’s assault on Scarecrow’s decoy plane, his figure sometimes almost dissolves into sketchiness, possibly indicating the strain of the weekly schedule. Hopefully the editors will be able to schedule things better in the next leg of this series, so that artists and inkers will at least be able to finish their own issues, giving each chapter a sense of its own coherency.

Daniel provides his own cover, which is nice, but poses a somewhat confusing question for those who have been tracking the series. Like the first Eternal series, the solicitations indicated that a major artist would handle covers for each month – but while Francis Manapul was scheduled for all of the second month of this series, he apparently only ended up doing one cover – for issue #5 – and Daniel and another artist will complete the other covers for November. Unfortunately, Daniel’s cover, while certainly exciting, is also a bit generic, providing no specific cues from the story other than Batman and Robin working together.

A nice artistic touch this issue was the way Daniel underlines Dick’s character development in this series. Last issue, Tim rightly accused Dick of following in Bruce’s most unhealthy relationship patterns of mistrust, and this issue, we see Dick starting to sideline Cassandra and Harper, but Jason helps him to see a better way. Just as Batman caught Robin in his plane after Scarecrow’s decoy exploded, Dick catches Cassandra and Harper with his own plane – but instead of keeping them in the dark, Dick is trying to form more open, trusting relationships. Next week, Genevieve Valentine will introduce us to the Sculptor, likely the person who shapes Mother’s stolen children – though physical or mental shaping techniques have yet to be revealed. During Maxwell’s story, we see a shot of his purchased wife’s treatment, with our first clear view of Mother (her face in issue #0 was digitally blurred), the Orphan, and a new figure, who I believe is likely this new villainous character.  It looks like this series of Eternal replaces the ever repeating “who is the mastermind” pattern of storytelling with “who is Mother’s next step up the ladder.”

We learn two major portions of Mother’s operating techniques this issue – she can “activate” people’s brainwashing with some kind of broadcast signal, and she specializes in selling people with fabricated backstories after killing their parents for enormous sums of money. Bruce’s fear that he is doing the same thing for Dick provides an interesting, if ultimately rather silly parallel – while Bruce is attempting to reshape Dick to heal him from trauma, there’s no way in which Bruce taking Dick in from a tragedy he did not commit is comparable to killing someone’s parents and brainwashing them to sell to the highest bidder.

After the uneven excitement of the last few issues, this issue sets the series back on track with a dark, tragic mystery and the reveal of the Mother.