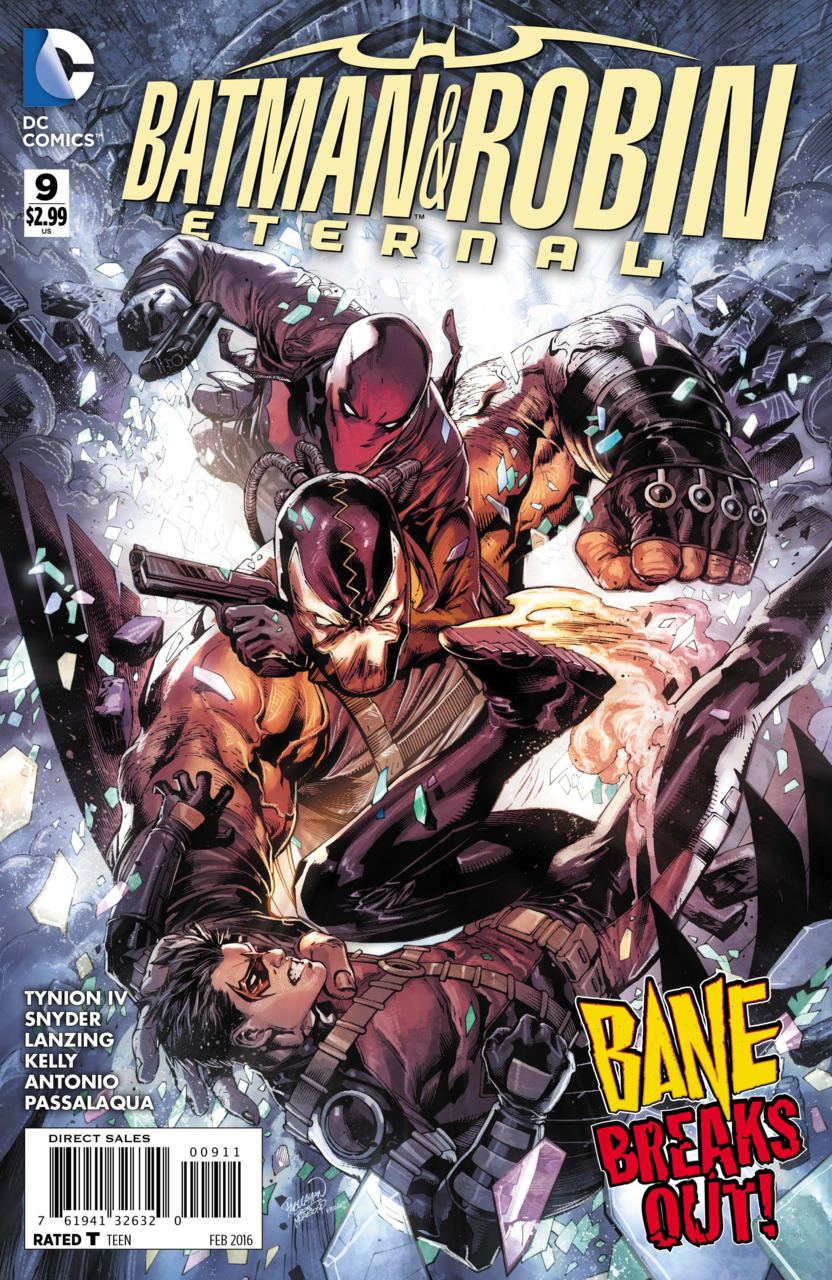 Tim Drake (Red Robin) and Jason Todd (Red Hood) team up with Bane as they investigate the Order of St. Dumas and meet a new foe.

After chasing down the fear-toxin-addled black marketeer last issue and learning of the Angel of Death, Tim and Jason are shot down by Santa Prisca fighter jets. Landing in the jungle, they come upon a church called the Crusade of St. Dumas. Tim gives Jason a summary of their organization – in the past few years, they’ve gone from high tech do-gooders to shady supervillain syndicate. The “Angel of Death” always appears in their territory, and Jason and Tim speculate this could be the Orphan.

Before they can continue, however, Bane attacks. After trading many blows and quips, Tim manages to propose an alliance to attack the Crusade. Bane will get control of his country, Santa Prisca, back from the Order, and Tim and Jason will get answers.

Meanwhile, in Prague, Dick attempts to train Harper, and despite her prickly attitude, they manage to find common ground to work together to go through Batman’s files from Dick and Bruce’s first time in the city.

In the past, Batman planted a tracker on Mother, which gives Robin a chance to plan a takedown of Crane’s operation. Unknown to Dick, Bruce pursues Mother’s designer human trafficking, which leads him into direct contact with Mother again. She detected his tracker immediately, and the Scarecrow information it sent Dick was at her direction. As she and Orphan attack him, she taunts him for being a failure at devoting himself to his parents’ deaths. She reiterates her offer to build him a better Robin, which Bruce again rejects before fleeing. Mother tells Orphan that she has planted doubt in his mind which will bring Batman back to her.

Back in Santa Prisca’s present, Bane, Jason, and Tim use a tunnel to enter the island of the Crusade, burn their way into its cellars, and dodge indestructible drones as they make their way to the center of the compound. Bane is infuriated that the Order is subverting his soldiers, feeding them unknown substances to convert them.

Before they can enact a plan, though, a mysterious voice shouts that the Order has been breached by heretics. As Bane, Jason, and Tim rush into the open, they are confronted by a masked man in red and gold wielding a flaming sword, claiming to be the Angel of Death, Azrael.

Lanzing and Kelly provide some very fun moments of character and Bat-history jokes with Tim’s three types of shark repellent and the use of Jason’s cyber-blades as machetes in the jungle, but sadly they also fumble Harper Row’s characterization badly. Whereas before she was spiky and fairly unique in her approach to being a superhero, in this issue she whines and attempts to one-up each of the Robins – a sadder family tragedy than Dick, more anger than Jason, and better gadgets than Tim. This type of writing incompetence, tearing down other characters to promote a new one, has been seen before in the relationship between Harper and Stephanie Brown – but it will likely get more push back here when it’s done to the established Robins. Sadly, the Dick/Harper scene and the Bruce flashback do very little to propel character growth or plot progression, as Mother’s plans remain as hidden as ever both in the past and the present.

Bane’s appearance here is interesting, but ultimately not very exciting. In addition to the seemingly obligatory “main characters meet and fight” scene that goes on far too long, his character seems to be “slightly more violent Batman of Santa Prisca,” constantly talking about “my” land, “my” men, etc.  It seems a bit like this plot line has the same tendencies of the Arkham Asylum/ghost invasion part of the original Batman Eternal – nothing that happens seems to really be connected to the main villain’s plot. The possible link through the brainwashing/triggering signal that the Order of St. Dumas uses, and the potential of Azrael as a character, seem a bit lost by being so loosely tethered to Mother’s schemes. It’s quite possible for the series to make stronger links between the two villains, but currently, investment is low.

A fairly unspectacular issue reintroduces Azrael and Bane to the Eternal world.