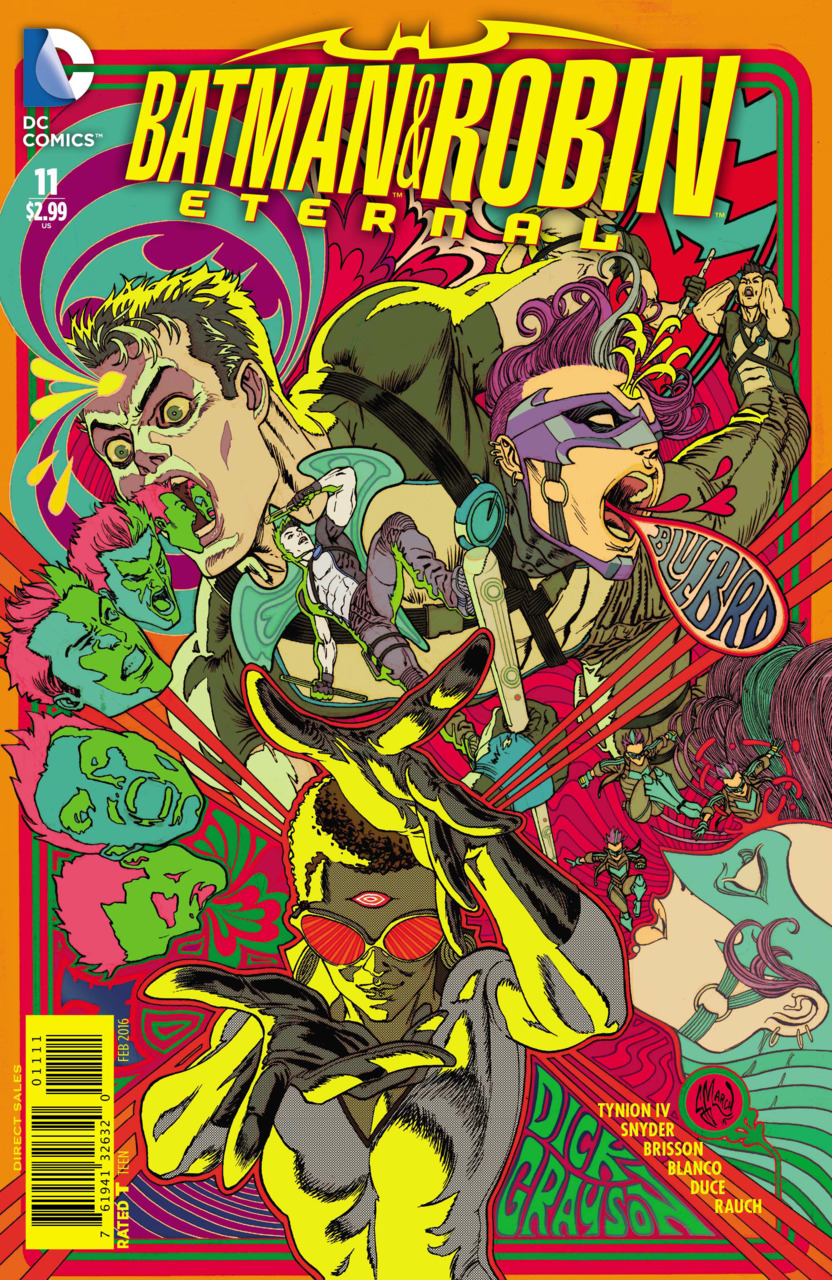 At David Cain’s house, Dick Grayson and Harper react to the Sculptor’s strange knowledge of their names and history. The Sculptor tells them that David Cain, the Orphan would never have left clues for them – instead, she has brought them there to help her save Mother’s children who are marked for destruction. Harper protests, but the Sculptor reveals her telepathic abilities by pushing Harper into a chair.

The Sculptor takes Harper through Cassandra’s training with the Orphan, David Cain, her father. She explains Orphan’s devotion to Mother, and his experiment with Cass, barring her from all communication so that she would be forced to learn to read body language. Orphan didn’t like Mother’s new techniques of using Scarecrow’s fear toxin to grow her children, preferring instead to slaughter people in front of Cassandra to desensitize her to death. He also trained her in combat until Cassandra was unbeatable, then presented her to Mother as proof that the old ways were better. Unfortunately for Orphan, Mother sees this secret training as a betrayal, and banishes Cassandra from her sight.

Harper and Sculptor find themselves in Gotham, where they see Cassandra slit a woman’s throat. Sculptor is surprised – she did not intend to go down this memory – but she explains that Cassandra didn’t want to be a killer. She then takes Harper back to Mother’s nursery, where Harper is shocked to find Batman making a deal for a new Robin with Mother. Unfortunately, Harper vocalizes her distress about Batman’s secret, and Dick breaks them out of Sculptor’s mind-meld. In a panicked rage, he forces Sculptor to mind meld with him to find out Batman’s secret, despite the danger to both parties posed by his Spyral tech.

Harper’s journey into Cassandra’s past is interesting, though the writers clearly chose her because Cassandra’s one murder victim will turn out to be Harper’s mother, leading to the conflict between Harper and the heroes the solicitations have been proclaiming for several months.  While Harper as audience surrogate isn’t terrible, it’s still somewhat clumsily handled, though less so than issue #9’s “I’m better than all the Robins” scene.

Cassandra’s reason for running away after the ballet fight blends her original continuity backstory nicely into the new 52, as well as clearly setting up further drama between Cass and Harper. While that aspect has been well handled, if more than a bit obvious, it’s kind of frustrating that the plot depends on such cliches as Harper wandering down an unintended mental alleyway, or Dick waking the Sculptor and Harper up before they find the information that he really wants to know. The latter is especially annoying, as if Dick had just waited, the information would have been available, but instead, it feels like a very arbitrary way to extend this plot to two issues and inject artificial peril in an already tense situation.

That being said, the Sculptor is a very interesting character, with her mind powers, and her ambiguous relationship with Mother. Like the ballerina’s handler in Genevieve Valentine’s arc, Sculptor seems to love Mother’s children more than the loyalty to Mother, and provides an intriguing crack in Mother’s armor. The contrast between these two agents and David Cain, the Orphan, gives Mother’s organization a sense of richness, though hopefully a larger picture of how all the agents relate to each other will flesh that out beyond these basic thumbnails of their abilities and stake in the operation. Additionally, I hope that Sculptor is not killed off next issue, as that smacks too much of “mysterious walk on part who tells the heroes something bigger is involved, but are conveniently killed off before they can tell them something actually helpful” plot devices. Sadly, given the clumsiness of Dick’s injection into the mind meld at the end of the issue, this outcome seems most likely.

The balance of art in this issue is handled well, with distinct sections being handled by different artists, but Dick at the very end looks too much like a cartoon, not fitting the darker nature of the previous pages. It’s interesting that the team, which before has had an artist do all of the art for the first issue, and then use fill-ins for the second, has started with fill-ins – and next week, a completely different artist is listed. If this signals a return to Batman Eternal’s one new artist per issue practice, I welcome it in contrast to the piecemeal approach.

Guillem March, of Gotham City Sirens and early new 52 Catwoman fame, does the cover here, and the psychedelic, semi-Toulouse-Lautrec cover is very arresting.

The solicitations for the final month of Eternal have been released, and in very disappointing news, Tony Daniel is not the main artist for the final issue. As much as I enjoyed the first series of Eternal, the fact that Jason Fabok didn’t return at all to do part of issue 52 really rankled, as the artistic styles were noticeably different. One hopes that Daniel will provide at least a few pages in the finale, perhaps of flashback sections. Overall, though some artists have produced really standout sections (Daniel in #6, Martinez in #7), the art (including covers) for the second series of Eternal has felt much more disorganized and poorly scheduled – with artists and covers constantly changing from their original solicitations. One would have hoped that the editorial for Eternal would have learned from their first series, but the situation has deteriorated. Instead of full issues by one artist, we constantly get patched together issues where characters change face and body type from page to page.

An exciting, reasonably well handled re-introduction of Cassandra Cain’s backstory into the new 52, this issue makes a few missteps, but is otherwise very enjoyable.