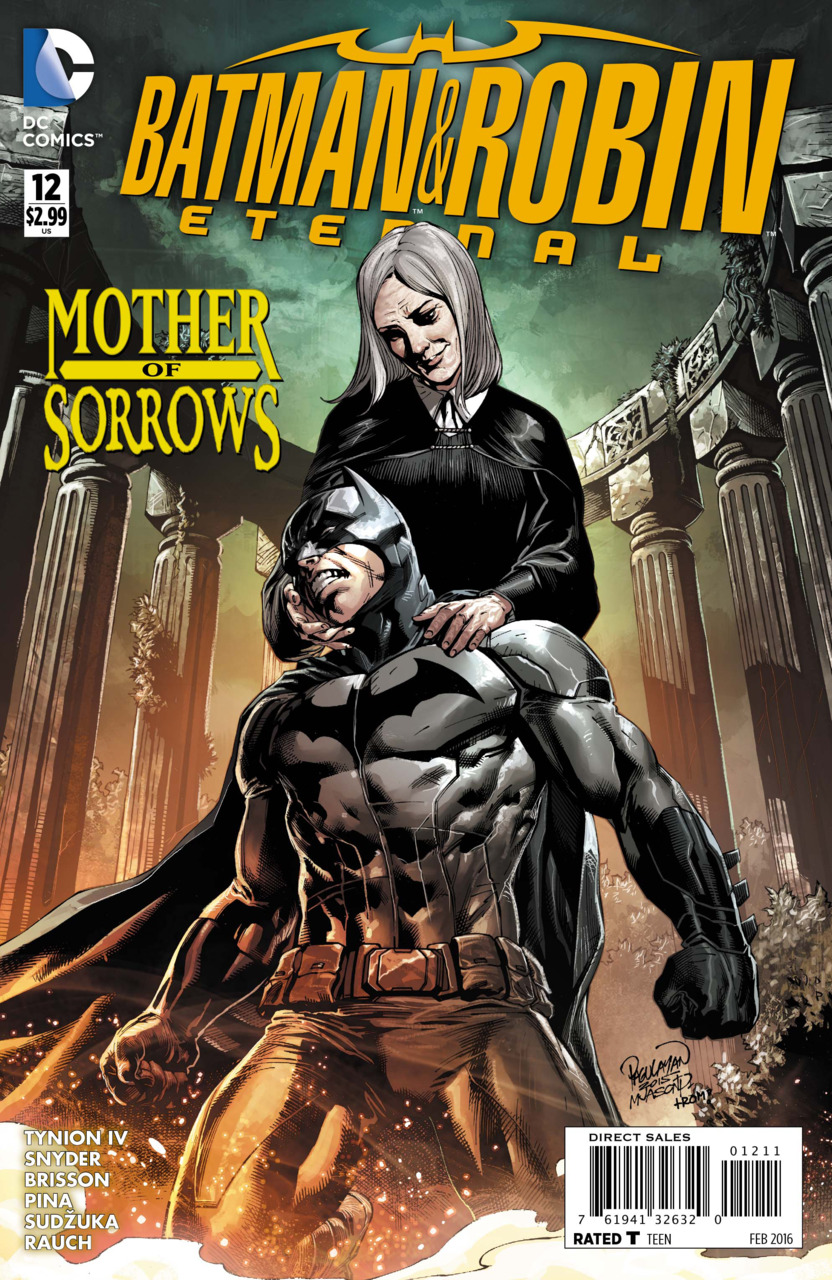 Dick Grayson and the Sculptor delve into the past, setting the stage for the midpoint of our story.

When he hears Harper Row say Batman’s name, Dick forces his way into a new mind meld with the Sculptor. The Sculptor shows him her childhood – Mother using David Cain (the Orphan) as a boy to murder her parents, becoming the Adam and Eve of Mother’s children. Mother had selected the Sculptor because of her telepathy, to take children marked by the trauma of violently becoming an orphan and molding something new. Dick rejects the Sculptor’s claims of love for the children, and she agrees that it was abusive, but that Mother’s agents are too numerous and too highly placed to reach them all individually. The only way to stop Mother is to cut off the head.

She then tells Dick that there are children at the “nursery,” who are going through Mother’s new method, simulating trauma instead of directly inducing it. Because the new process is more efficient, eliminating the need for the violence of David Cain and the mental manipulation of the Sculptor, Mother is wiping out all of her old agents. Dick pleads with the Sculptor to come with them, but she says she cannot, but that everything Dick needs to know is now in his mind.

Dick then asks to see Batman’s history with Mother. He sees Mother boasting that Robin (Dick) is a failure, and Batman needs one of her children to be a worthy partner, playing to all of Dick’s worst fears as Robin – that he wasn’t good enough for Batman. In the past, Batman appears to agree with mother that Dick failed, and insists on obtaining Dick’s replacement himself. Dick violently rejects what he sees and hears, but Sculptor says that it’s all in Dick’s control – there is no manipulation of the images or sounds. We then see a quick recap of the murder in Egypt from issue #1, before Dick sees the fear toxin hallucination of Batman from issue #2, and is kicked into reality, where Harper asks what he saw.

Instead of answering Harper, Dick kicks into high gear to rescue Mother’s “obsolete” children, insisting that the Sculptor come with them. However, the Sculptor turns out to have been a psychic projection, and they both rush to an underwater entrance to the nursery.

The comic cuts to the vast underground cavern of the nursery, where dozens of children lie dead and bleeding, with crimson footsteps leading to Cassandra Cain, curled up and dripping with blood.

Ed Brisson’s first arc has been an extremely dark look at Cassandra Cain’s revamped backstory, and the clearest hint yet at Mother’s overall plan.  Unlike Steve Orlando’s arc, however, he’s managed to keep the tone consistent, not jolting from cute in-jokes and witty worldbuilding to brutal violence, but merging the violence with a psychedelic dreamscape that provides an exciting narrative while at the same time paving the way for things to come.  Mother’s plan, vaguely glimpse in previous issues as “cleaning house,” now comes into sharper focus with the revelation that her plan from about five years ago to replace direct violent trauma with fear toxin has come to fruition.  As a ruthlessly efficient supervillain, Mother wishes to destroy all of her “inferior” creations, and has begun doing so. But her heartlessness has left cracks in her armor – and Brisson’s two-part arc has shown how Mother’s first two children, David Cain, the Orphan, and the Sculptor, have created the seeds of her own destruction. By refusing to bring David along with her (or eliminating him for his sadism), she inadvertently creates Cassandra Cain, an ally who knows her methods. By neglecting the Sculptor, she leaves a massive information leak to her enemies.  The thematic resonance between these two issues is intelligently crafted, and hopefully all of these threads will continue to weave together in the wider tapestry of the Bat-family’s defeat of this terrible villain.

Javier Pina and Goran Sudzuka provide the art here, and while serviceable, nothing stands out as particularly visually memorable other than the first complete absence of the traditional Eternal title page. The issue feels a bit padded – despite the quick 20 page length, there are several pages (including the two page splash leading into the dreamscape, and the reveal of Cassandra among the bodies of Mother’s children) which could have been condensed quite a bit. While the emotional journey of learning about the Sculptor’s backstory was satisfying as a single issue narrative, Brisson hasn’t quite gotten down how to fill each page effectively.

Next week, James Tynion brings Cass back as a central figure in the present, and will presumably pivot the series in its two middle issues into a new direction, just as he did in issue #6.

Brisson brings intelligent thematic work into the backstory of the new character of the Sculptor, and brings back the opening flashback of the series in a well done issue.