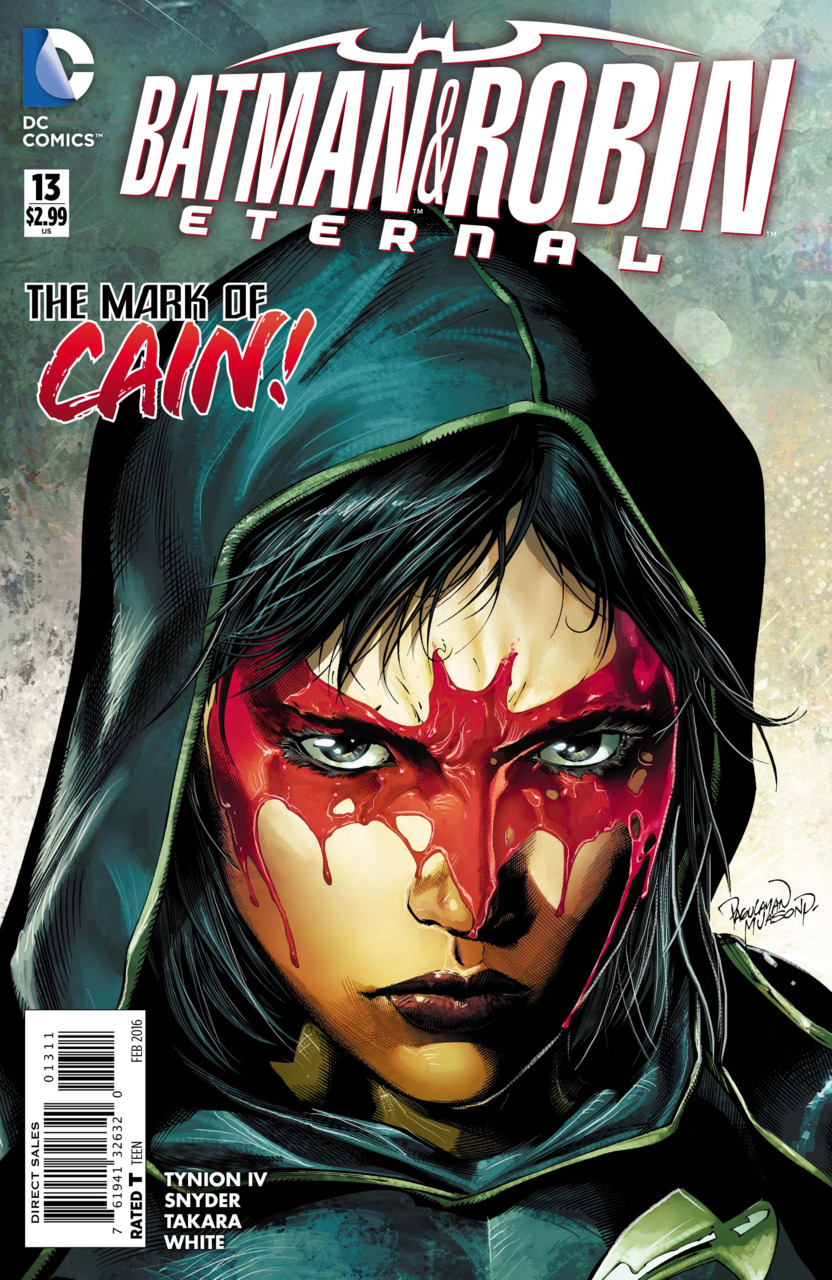 Cassandra Cain’s paths in the past and present converge with the Bat-family as Mother and Orphan’s plans for destruction ramp up.

Rather disjointedly, instead of opening on Cassandra Cain reacting to the slaughter of Mother’s children in the Nursery as seen in the final pages of the last issue, this narrative opens with Cass covertly HALO jumping out of an Argus Tactical Surveillance Shuttle into a huge diamond mine closed by an ecological disaster, the secret site of the Nursery. Evading its defenses, Cass remembers watching Mother’s new children arriving while she sulked in the shadows on her father’s orders. Mother greeted the children with a facade of love and concern, while her father, David Cain, the Orphan, reacts to Cass’s disobedience with extreme punishment.

In a later memory, the Sculptor catches Cass again sneaking a look at the other childrens’ training. The Sculptor is sympathetic to Cass’s plight, but when Cass imitates a hug she observes in the other children, the Sculptor says she can never do that again. In the present, Cass fights and then rewires a robot to lead her to the Hatchery, where it says many children have returned in the past weeks. David Cain attacks, slicing the robot in half, demonstrating his new cybernetic hand. He throws her down into the pit where he’s thrown all the children he’s slaughtered. Claiming to only serve perfection, not cruelty, he blames Cassandra’s alliance with Batman for Mother’s decision to kill all of her current children and turn to Scarecrow’s fear toxin methods.

Flashing back to the middle of the Endgame arc in the Batman comic, Batman tells Cassandra to give Dick Grayson the flashdrive with all his information on Mother and her organization, as he believes he will die in his battle with the Joker. Batman insists that even though he knows what the Orphan and Mother made Cassandra do, she’s not a monster. She’s a hero because she chose to fight the evil she was born and raised into, and that her choices, not other peoples’, defines her. As Cass remembers her embrace of Batman, she takes the blood of Mother’s discarded children and gives herself a red Bat mask, and attacks David Cain. Dick Grayson and Harper Row (Bluebird) arrive, taking down the Orphan with Bat-tasers. Cass rushes to hug Harper, but Mother appears via hologram, saying that she doesn’t hate them, but pities their weakness, and must destroy them all, including David, with a thermonuclear blast.

James Tynion IV again proves that even in the confusion of a multi-author weekly series, he can write an ambitious and emotionally engaging issue propelling the characters and story forward. While the connection between last week’s Ed Brisson-penned teaser of Cassandra’s bloody footprints in what appears to be the Nursery is pretty much ignored in this issue’s exciting HALO drop and flashback-infused battle between Cassandra Cain and her father, once the initial discontinuity is processed, the comic holds up on its own as a powerful story. Tynion weaves together a few recurring elements – Cassandra’s mostly wordless existence, her relationship with parental figures, and the simple act of a hug – into a visually striking story. Marcio Takara’s art is up to the task, with thick, appealing outlines, sympathetic facial expressions, and powerful compositions that highlight Tynion’s carefully constructed script. The image where Cassandra, rejecting the abuse of the Orphan, the Sculptor, and Mother, embraces Batman, highlights Takara’s strengths: Cassandra’s name came from the Greek mythological figure of Cassandra the seer of Troy, providing an interesting link in the re-imagined chain of her origin. The original Cassandra was cursed by the vindictive god Apollo to know the future but to forever be disbelieved. David Cain tells Cassandra that he named her as his own vision of the future, perhaps himself creating the irony that she was instead the destruction of his own evil past, and a look forward into the brighter future of Batman’s quest for justice and hope.

Tynion also highlights Cassandra’s embrace of Batman’s symbol when she creates a bat mask out of blood, intelligently paralleling Cassandra’s pre-New 52 continuity commitment to the ideals of justice and non-killing that marked her 73-issue run as Batgirl.  Though her new origin story is more explicitly violent and dark than her old origin, it’s clear that just as Tynion spearheaded the recreation of Stephanie Brown in the first series of Eternal, his recreation of Cassandra Cain is driven by a similar love and understanding of the source material.

Our hero’s knowledge of Mother’s plan remains relatively unchanged from the last issue’s reveal of her clean slate initiative, but a new element in Mother’s inclusion of David Cain as an element which must be eradicated appears. It’s highly likely that with this action, David Cain will turn against Mother as his partner, as the Sculptor did, though with his love of violence and cruelty, it’s unlikely he will ever willingly help Dick and the other Robins directly as she chose to.  The reunion of Cassandra and Harper is touching, and a nice tie-in to Tynion’s repeated motif of Cassandra hugging people, but a sad foreshadowing of the fairly obvious reveal that the person Cassandra killed in Harper’s mind journey flashback was Harper’s mother.

Halfway through the series, we have a standout issue with strong art and writing, but unfortunately, our Eternal heroes are, as in the previous series, a bit too passive and reactive. So far, they haven’t been able to save a single one of Mother’s children from her murderous erasure, with the exception of the ballerina, who was saved by the quick thinking of Mother’s handler, who rebels against her. Hopefully, Dick, Jason, Tim, Harper, and the other heroes will be able to formulate an active plan soon that puts them in the driver’s seat of the plot, giving us heroes we can root for because they are a force for good, not just a clean-up crew.

A powerful issue with careful writing and very appealing art that solidifies Cassandra Cain and her origin in The Batman Universe.