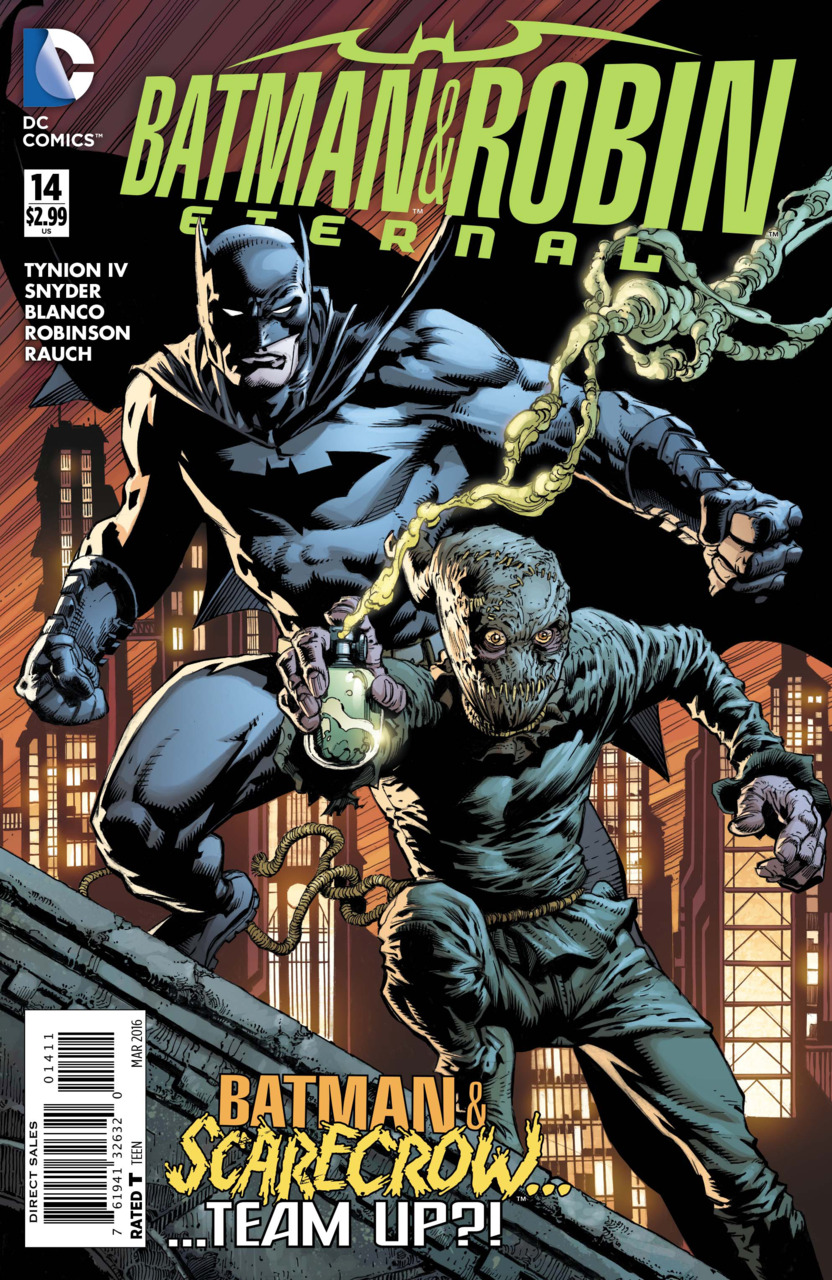 In the past and present, Batman and Dick Grayson face wheels and deals with the Scarecrow (Dr. Crane), the Orphan (David Cain), and of course Mother.

Batman and Robin crash the Batmobile into a chemical plant in Prague during the flashback portion of the narrative. Using the Batmobile’s smoke generators for cover, Batman and Robin take down Scarecrow’s goons, though Robin wonders why the villain has made such obvious moves after weeks of being quiet, as if Scarecrow wanted them to find him now. Scarecrow confirms this to Batman by privately hacking into his communications signal, leaving Robin out of the loop. He persuades Batman to send Robin to disable a fear toxin bomb so he can talk to Batman about Mother. Robin is suspicious, but Batman tells him it’s all in his head.

Now, in the Nursery after Mother has told Harper Row, Cassandra Cain, Dick, and the Orphan that she plans to wipe them all out with a nuclear bomb, Dick desperately tries to think of a way out. Orphan tells them that their plane is destroyed, and when Dick attempts to work together to survive, he attacks, refusing to betray Mother. Cass joins the fight, and it becomes clear that Orphan believes it’s just a test to make them perfect. Orphan orders the security robots to kill them all, so Harper and Cass head to the computer center to try to turn both the bots and the nuke off.

Dick faces off with Orphan, who tries to get in Dick’s head by taunting him with the knowledge that Batman was making an alliance with Crane behind Dick’s back. Flashing back in time, we see Batman confronting Scarecrow on a bridge. Crane claims that he’s a scientist, only working with Mother for the funding.  She had him create trauma toxin, to destroy the mind and leave it ripe for recreation, with the plan of gassing every major city on the planet, a plan so evil even Crane can’t embrace it. He tries to get Batman to put him in Arkham for safekeeping, and threatens Robin with the bomb he’s disabling, but Batman says he disabled the bomb this morning. Batman proclaims that Crane will go to Arkham only after he’s played his part in defeating Mother.

Now, Harper is failing to override anything without Orphan’s biometrics. She breaks down, thinking of her brother Cullen and friend Stephanie Brown after her death. Cass comforts her, and Harper tells her she understands that Cass didn’t kill because she wanted to, and they embrace. They then plan to go down fighting all the robots they can destroy, but Dick has defeated Orphan and used his controls to shut down the robots. Dick’s quite badly hurt, so Harper and Cass get him onto Mother’s plane using Orphan’s access. Dick says that Orphan and Mother think that Batman’s allies think he’s perfect, but that Dick knows he was only human. The group, including a tied up Orphan, head to England for Spyral HQ, with Dick darkly saying “No more secrets” as he looks at Cass.

As promised on the cover, Batman and Scarecrow team up – but unlike Batman: Europa, the team up is much more on Batman’s terms. The reveal of Mother’s plan in the past to gas all major cities with the trauma toxin hints that she may be trying something like this again, and certainly fits with her desire to destroy all previous children so she can start fresh with a new, vast crop of traumatized templates. It also fits with the climax glimpsed in the 8-page preview, where Dick is facing an icy fortress alone while Red Robin, Harper, Red Hood, Jim Gordon, Duke Thomas, Spoiler, and Damian Wayne fight Mother’s agents in cities like Paris and Tokyo. It looks like the Batfamily might be trying to prevent the explosions of Mother’s trauma toxin bombs all over the world while fending off her sleeper agent children, while Dick confronts her personally by himself.

Tynion has a real gift for writing great moments, like the opening page, where in the past, Dick is thrilled by not having to slow down in the vehicular assault on Scarecrow’s forces. We’re also, finally, back to the Batman and Robin Eternal standard title splash page where people are flying through the air. However, despite being a solidly constructed issue, the emotional climax of the book, Harper and Cassandra reconnecting after Cass fled in issue #8, doesn’t work quite as well as the scene last issue between Batman and Cass. Read as a two-part arc along with last week’s issue, this shows signs of the same careful setup and payoff that marks Tynion’s best writing, but there’s something that doesn’t hit quite as hard.

The art by Fernando Blanco and Roger Robinson this issue isn’t nearly as appealing or engaging as Marcio Takara’s last week, but is quite serviceable. Batman and Robin’s assault on Scarecrow’s factory is especially well done, with shadows, wide shots, and reaction panels that keep us engaged and excited like all the best Batman fights do. The Dick/Harper/Cassandra sections are nicely contrasted, not as grainy or shadowed as the flashbacks, though also not quite as visually exciting. Overall, a decent issue artwise, and a possible preview for one of the artists who is scheduled to help bring the series in for its conclusion in March (Blanco is solicited as the artist for #22 and 23, though art solicitations for this series have been pretty changeable).

With all the plot revelations that have coalesced at this midpoint arc by showrunner Tynion, it will be interesting to see where the comic goes next. The next few issues promise to focus on Tim Drake (Red Robin) and Jason Todd (Red Hood), which will likely be exciting since the writing team, Jackson Lanzing and Collin Kelly, did a really strong job with their voices and actions last month. Hopefully some new wrinkles will appear in non-arbitrary ways – having character act stupidly just to prolong a one-issue narrative into a two-issue arc, as happened with Ed Brisson’s issues, doesn’t quite inspire confidence.  Last we saw, Tim was in very bad shape after Azrael’s mental attack, so presumably the next issue will deal with Tim attempting to counteract that damage with Red Hood’s help. Just as last Lanzing/Kelly arc focused on Tim and Jason to the exclusion of Dick, Harper, and Cassandra, it’s likely that we won’t see Dick actually accomplish anything at Spyral for some time – possibly not even until issue #19 (5 issues from now), as Tim Seeley, co-writer of Grayson, takes over the title again at that point, though Steve Orlando (issue #17) has also played with the Spyral plotline and character in the past (issues #4 and 5). Perhaps a bit much speculation, but at this point, with the skeleton of Mother’s plans helping the future solicitations come into focus, such speculation can start to converge into likelihood instead of the wildly branching trees of mass guessing.

A solid issue pushing the story forward in many small ways alongside exciting, well constructed action and character beats.