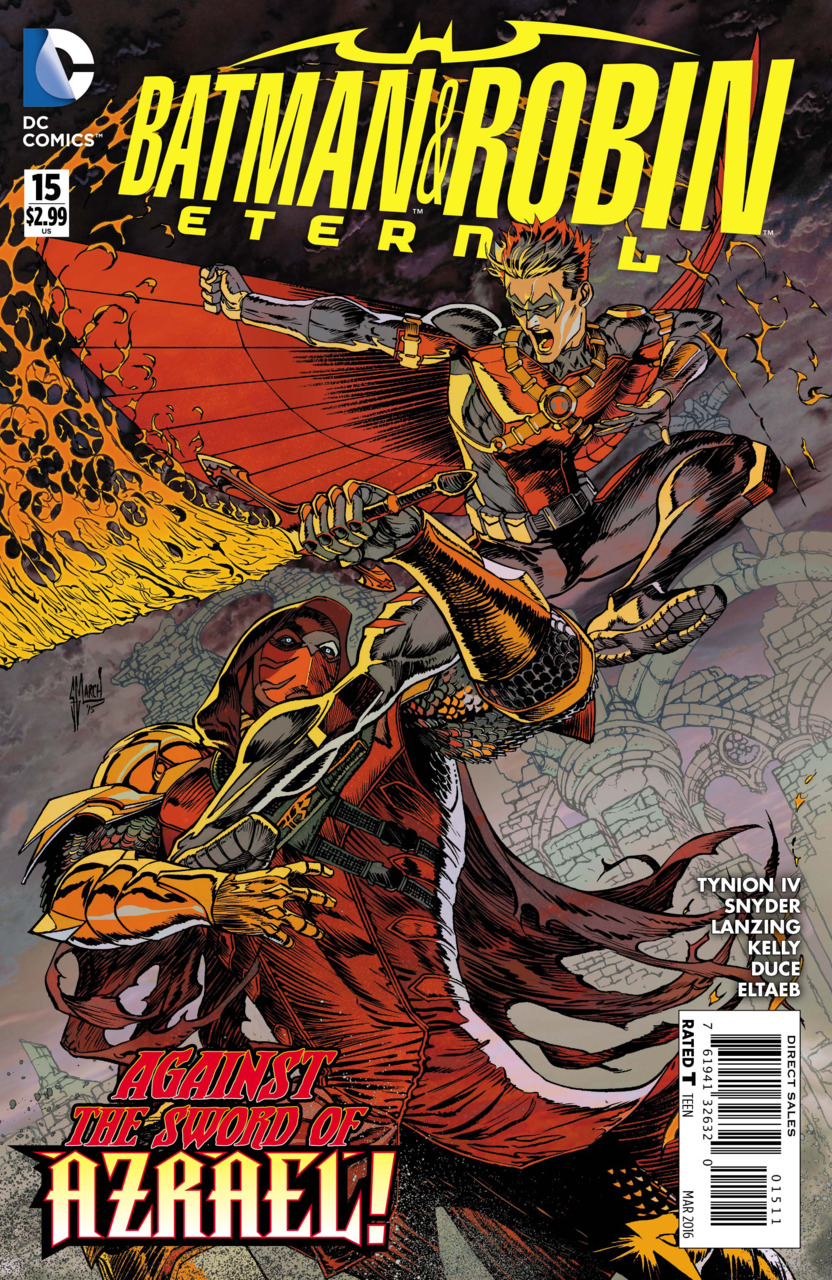 Azrael (Jean-Paul Valley) sits in Gnosis, the secret city of the Order of St. Dumas, meditating, trying to regain his perspective after facing Tim and Jason. Meanwhile, Tim drags Jason’s body across the desert, through the energy shield protecting the city. Azrael’s meditation is broken by a seemingly divine voice, and by holographic simulations of Tim and Jason’s attack. Working with the voice, Azrael reassures himself that he fights for the right cause, and he prepares to meet Tim again.

Tim claims that he has seen the light because of Azrael’s attack, and betrayed Jason to join the Order. Two acolytes disarm Jason and cast him into a pit, but he had kept a Batarang in his mouth under his hood.  Tim probes Azrael for information as they approach the heart of the city, learning the vast history and practices of the Order, including their reliance of life-lengthening rather than reproduction to maintain their ranks.

As Jason’s explosive Batarang breaks him out, he begins counting down. Tim meets the current St. Dumas – a man literally plugged into the world – who tells him that Tim will become the new Angel of Death by fighting Azrael to the death.

In the past, Mother meets with Scarecrow, who delivers his psychological assessment of Batman – a man driven by fear of loss. Orphan counsels Mother to cast Scarecrow off, and rely on the Order of St. Dumas and their Ichthys formula instead. Mother rejects this advice, and tells him to prepare Cairo for Batman. Dick comes back to the Batcave in Prague and expresses his desire to continue his partnership. Batman tells him Crane is in Cairo, and that he wants to face Scarecrow with Robin, not alone.

In the present, Jason is investigating Ichthys with his fists, while Tim battles for his life, both counting down. When they both reach zero, their electromagnetic pulse goes off, frying all of Dumas’s equipment, and allowing Tim to throw a cement grenade at Azrael, while Jason learns that Ichthys is a way to program humans. However, Dumas demonstrates continued power, using Tim’s taser against him, and saying that the attack on Azrael broke Valley, and now Tim and Valley must be destroyed, while Jason is programmed by Ichthys to be the new angel of death. Jason then sees the Joker with a crowbar as the Ichthys takes hold of his mind.

Jackson Lanzing and Collin Kelly are back to provide another look at Tim and Jason, and just as their last look at the Red duo, it’s an exciting and humorous ride. The exploration into the Order of St. Dumas finally ties it more directly into the main plotline by introducing the Ichthys technology, which seems to be one of Mother’s possible world-destroying weapon options, in case Scarecrow’s trauma toxin doesn’t work. This connection also makes some sense, since Scarecrow was defeated many years ago (though, hilariously, the time frame has bounced from five years to three for no apparent reason), and even though we know Mother disappeared and was presumed dead, she must have been doing something for however long she’s been underground. Developing or commissioning Ichthys makes sense, instead of sitting on Scarecrow’s already complete project for that amount of time.

Azrael is also an interesting character, though like most constructed characters, it’s difficult to have too much connection with him because of the lack of a “real” personality. It looks like, just as Lanzing and Kelly previously formed an alliance between Bane and the Reds (to borrow Ed’s terminology from the TBU Comic Podcast), they now will add Azrael to the list of uneasy co-belligerents against Mother’s threat.

The structure of the issue is also quite a bit of fun – starting with Tim’s dark (but fairly obvious) double cross to enter the secret city of Gnosis (and that’s a pretty funny name for a secret city, since it’s a Greek word commonly used to mean secret knowledge), to Jason’s hidden Batarang, and the countdown to EMP blast. The art was enjoyable as well, with Christian Duce adding a somewhat humorous nod in the splash title page to the standard “two folk flying across the panel” structure, in this case having Jason being dragged across by Tim. The writers and artist show pretty strong skill in juggling multiple plotlines, using panel insets or quick cutting between actions to move all the main characters along.

Unfortunately, we don’t really get a look at how Tim recovered from his brainwashing, though interestingly it seems to have taken “weeks,” which doesn’t quite match with Dick Grayson, Harper Row, and Cassandra Cain’s time frame. Hopefully we’ll get at least some resolution to that in the next issue, though it will rather excitingly focus on Jason fighting his fear of the Joker from his time as Robin.

Tim and Jason return to the forefront of the story with a literal bang in a very enjoyable issue.