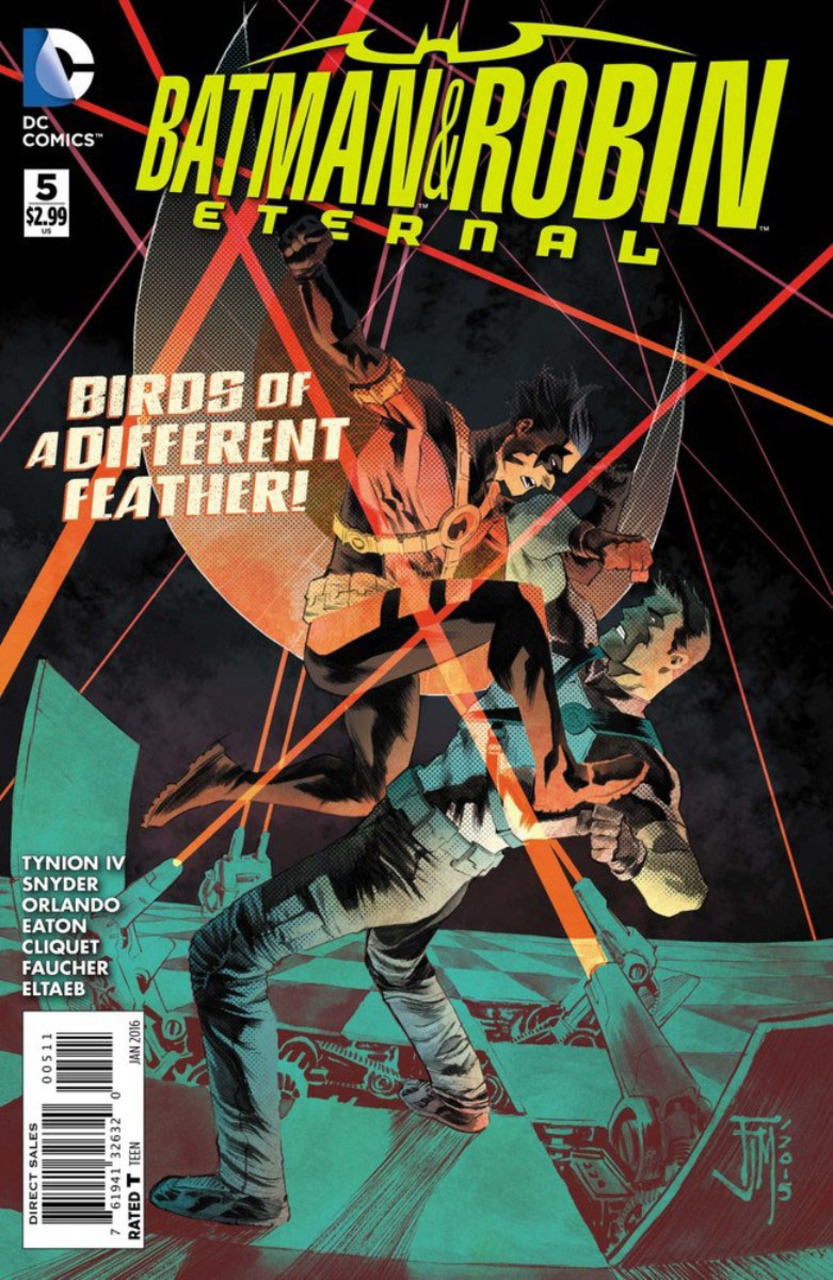 Tim Drake (Red Robin) and Dick Grayson battle over the past as Cassandra Cain and Harper Row face the Orphan again.

After no flashback last week, we open with Batman and Robin chasing the Scarecrow into a strange church where he meets with the Orphan and Cassandra Cain. The villains are surprisingly quick, slipping away as Batman and Robin crash through the church’s window, but not before Batman hears their plans to go to Prague.

In the present, Dick visits the “Drake’s” house, meeting with a couple he quickly deduces are Tim’s parents, but is interrupted by a superweapon-wielding Poppy. The Drakes activate the house’s laser defense system, which knocks out Poppy and brings a wrathful Tim down on Dick’s head.

Meanwhile, Cassandra has led Harper out of the Batcave into the church where she met the Scarecrow and Orphan so many years ago. Cassandra uncovers the Orphan, and he proceeds to fight her and re-injure Harper. He then offers Cassandra the chance to rejoin him, but she rejects him by chopping off his hand with his own sword. He leaves promising to kill her next time, and Harper shoots a tracker onto his leg, then hugs a saddened Cassandra.

After a brief but loving reunion with his parents, Tim confronts Dick over invading his privacy. Dick says that Mother’s ability to create sleeper agents left him no choice, and Tim bashes Dick in the face and storms off, saying that he expected more than Batman’s paranoia in Dick.

This issue immediately decides to table (but not deny) the possibility that Tim, Dick and Jason are Mother’s sleeper agents by having Tim’s “Hello, Mother” final panel last week was him talking to his real mother. However, the lines from Tim’s parents about Tim just showing up, hinting that he might be adopted, indicate that the creative team wants to string us along a bit more on this issue.

The art this week reflects the strains of a weekly comic a bit drastically – no less than three penciller/inker teams completed this issue, and the art shifts and character models show the differences a bit too obviously for comfort. At first, I believed the pairing of one artist with one writer for each two-issue arc was a good idea – but if the demands of creating 40 pages for two weeks in a row is proving too difficult, rotating artists out between each issue (as the future solicitations seem to indicate) provides more character continuity and a more enjoyable experience each week.

Beginning with the flashback pushes back the signature “two people flying across the top panel” splash/title page from the second to the fourth page, but otherwise, the book is fairly standard artistically. Tim occasionally looks more his own age of 16, but on the whole still doesn’t quite match his reported age. Harper’s mask continues to be creepy, awesome, and very cool with Gabe Eltaeb’s coloring, and the Orphan’s blood-spattered and filthy outfit remains viscerally disgusting.

Steve Orlando’s second issue isn’t quite as fun or dynamic as the first, though the fight scenes at least have cohesive endings instead of fading away like the kitchen ax fight last week. Jason and Stephanie aren’t doing anything this week as Harper and Cassandra’s escape from the cave moves past placeholding into gory violence. While it’s very nice to see Cassandra rejecting the abuse of her upbringing, apparently at least partially by the Orphan, and forming connections with Harper, the hand-chopping scene is a rather disgusting departure from the general level of violence in the comic, dragging readers out of the story. While it might be appropriate in a comic featuring a truly desperate villain like the Joker, as in the Endgame storyline, here it distracts from the pulpier adventure-mystery tone of the Eternal line.

Orlando also has some fun with Tim’s rebooted new 52 backstory. We learned in Teen Titans #0 (and Secret Origins #3) that Tim’s parents were put in the witness protection program when he tried to impress Batman by giving the Penguin’s money to charity. Here, Orlando reveals that like a good independent genius vigilante hacker, Tim took control of his parent’s protection some time ago, and built a Robin’s Nest for them complete with backstory and death lasers. The moment of Drake family togetherness was really nice, as was Dick’s alias, Lyle Dixon, a respectful tip of the hat to Chuck Dixon and Tom Lyle, creators of the Robin solo series in the 1990s. Sadly, the scene ends with another instance of Eternal-typical attempts to create drama through out-of-character character conflict (similar to Stephanie Brown and Harper’s conflict in the first Batman Eternal series issue #51) between Tim and Dick.

Lastly, it’s about time the series moved out of the narrow two day time frame and Gotham only geography – we’re headed to Prague!

A reasonably fun issue, marred a bit by abrupt tonal shift and forced character conflict, but moving the plot to the next stage.