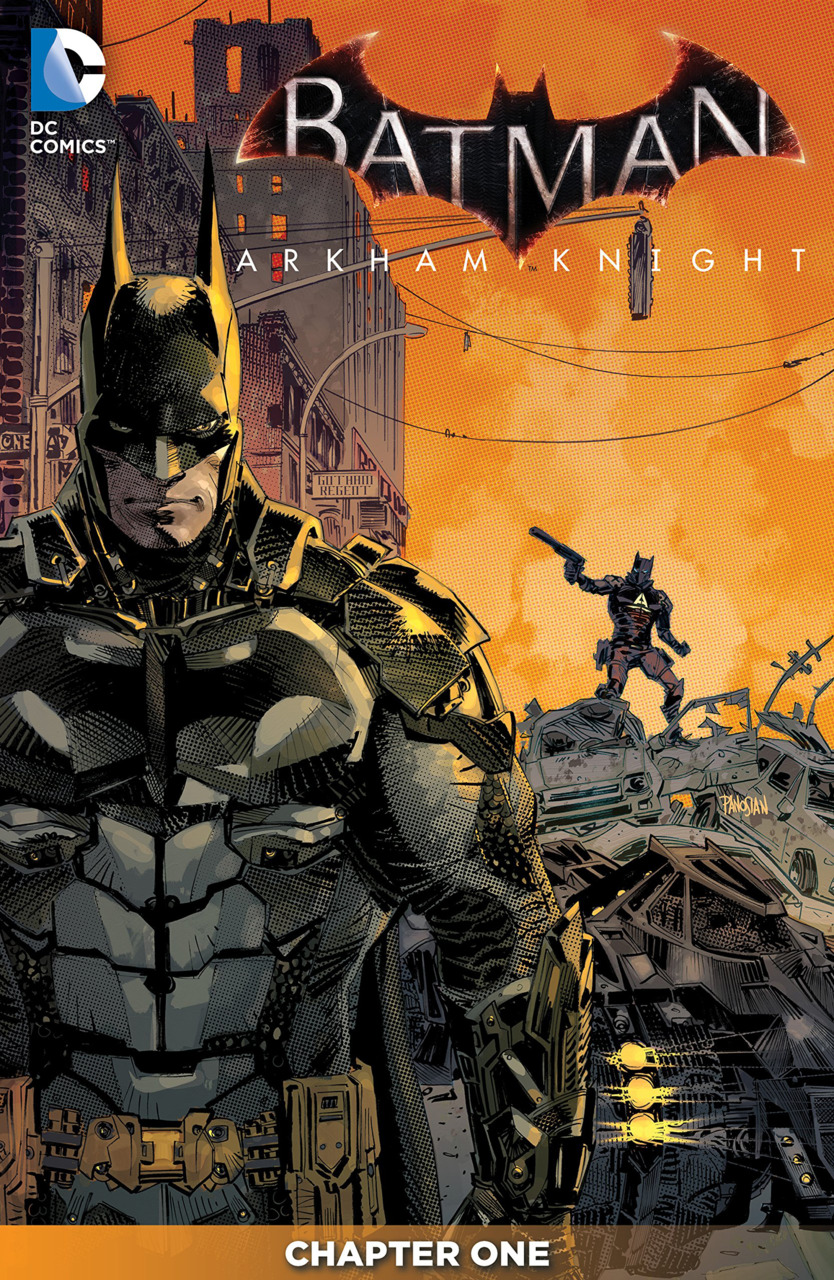 Historically videogame tie-in comics are pretty useless. A lot of the time they use second tier writers and second tier artists and let’s be frank here, they usually kind of suck. Even when these titles are fortunate enough to get a top level creative team the books don’t really add anything to universe and are largely forgettable (I’m looking at you Paul Dini and Carlos D’anda), but then Injustice Gods Among Us happened and all of sudden we realized that DC was capable of putting out  a weekly tie-in comic that wasn’t terrible. I’m happy to announce that the first chapter of Batman: Arkham Knight, written by Peter Tomasi with art by Viktor Bogdanovic, is not terrible but it certainly isn’t providing anything really fresh or exciting…yet.

This issue starts off right where Batman Arkham City the video game ended, with Batman carrying the dead body of the Joker out of the Monarch Theatre. Batman has just endured one of the longest nights of his life. He’s fought nearly every major rogue in his gallery, busted the heads of hundreds of Joker, Penguin, and Two-Face goons, and has watched his on again off again boo Talia al Ghul get killed by the Joker. So, it’s understandable that Batman would maybe want to take a little siesta before going out for another night of crime fighting.

Batman’s plans are cut short when the “all-new, all-improved” Electrocutioner shocks Batman out of the sky and forces him to fight and, not unlike his mentor, Batman makes quick work of him, leaving him on top of building for Commissioner Gordon to collect. This scene initially seems pretty frivolous. Electrocutioner was completely expendable in Arkham Origins the fact that Tomasi would choose to introduce a new Electrocutioner seems pretty baffling. But we soon learn that, not unlike his mentor, the new Electrocutioner is also completely expendable and he is offered up as the mysterious Arkham Knight’s first victim. It’s a pretty grisly scene to be honest and if this characterization of the Arkham Knight is what we will see in the upcoming video game the games recently announced Mature rating makes a lot more sense.

Back at Wayne Manor, Alfred dresses the wounds of battered Bruce Wayne. Alfred pleads with Bruce to shift his focus from doing good as Batman to doing good as Bruce Wayne. It’s a scene that any Batman fan has seen dozens of times. In the hands of a less capable writer this scene could easily become cliche and corny but Tomasi’s grasp on both of these characters shines in this scene and turns it into the issue’s best moment.

The issue ends with a pretty compelling twist that I won’t spoil here but it definitely raises a lot questions about how (or if?) it will carry over into the upcoming game.

Overall, this a good first issue. The writing is stellar and while the book isn’t really treading any new ground, Tomasi writes these characters so well he manages to makes the well worn territory compelling. This is definitely not a must buy, but if you have a casual interest in the Arkham games it might be worth it to wait until the digital title is released in print next month.