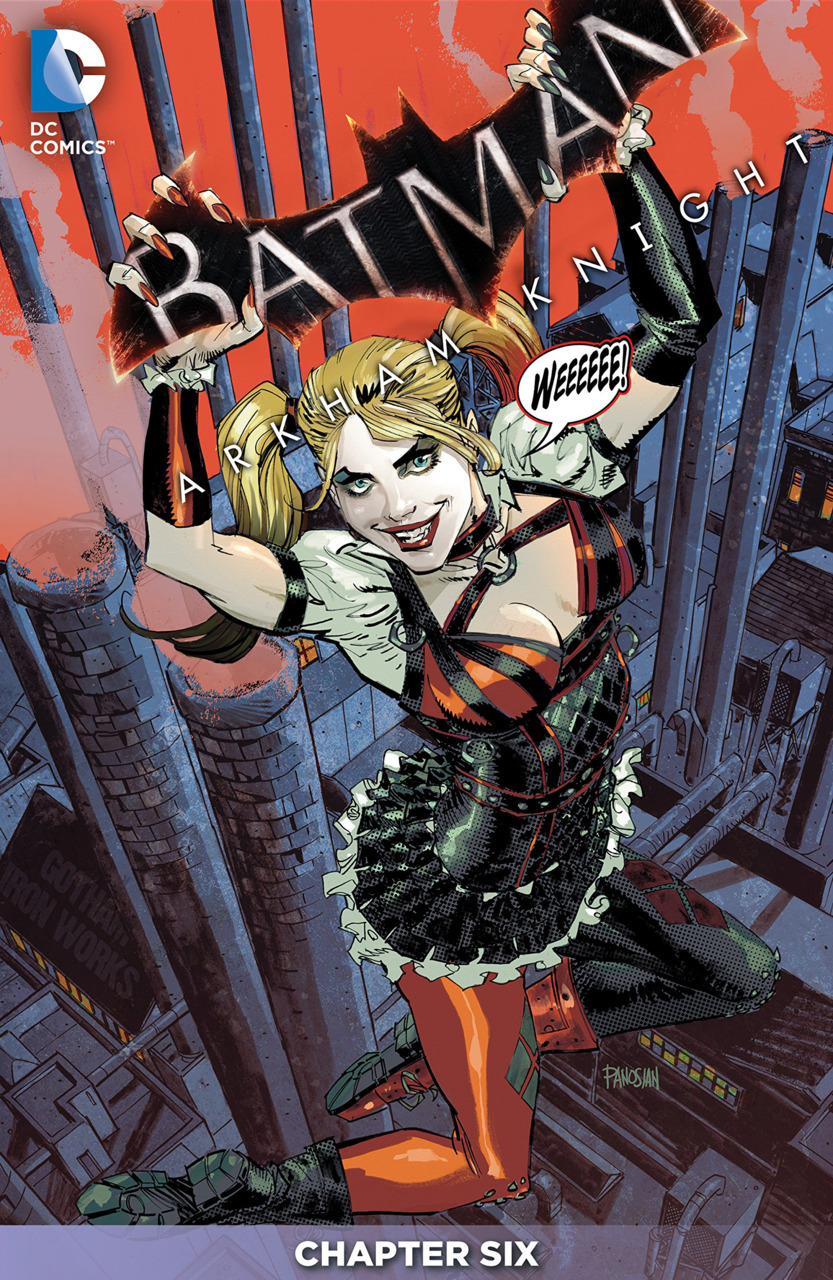 Arkham Knight chapter six is almost all action. It is also probably the best chapter of the series so far.  Writer Peter Tomasi for the most part lets artist Viktor Bogdanovic do most of the heavy lifting in this chapter and as spotty as Bogdanovic’s art has been in past chapters it is pretty solid here. And even though Tomasi’s writing is sparse this is also the first chapter that actually attempts to round out Harley Quinn.

Last chapter, Harley had tricked Batman into going into the basement of the old Joker hideout of Arkham City. In the basement he finds the antidote to the Joker toxin that has infected Jim Gordon but he also finds Killer Croc. In a flashback we see that Harley has enlisted Killer Croc to take care of Batman. The interaction between Harley and Croc in this flashback seems almost like a throwaway scene but it actually does a lot for characterizing Harley. It becomes pretty clear that Harley is a lot more competent than she is sometimes given credit for in the Arkham games. Arkham Asylum and City both had the tendency to use her in the sexy sidekick role. Her scenes in the games were crucial only because she was carrying out the Joker’s plan. Here Tomasi smartly bunks that trend. We see her plotting and scheming and ultimately executing a plot without the Joker. For the first time in the Arkham series Harley seems like a formidable foe for Batman (and yes I am including Harley Quinn’s Revenge here too).

As much as I enjoy Tomasi’s script work in this chapter, the action is what really drives this issue. The scenes move quick and the action is well paced. Bogdonavic’s work occasionally loses some detail and it hurts the overall quality especially when a nicely detailed panel is followed by something that seems so slapdash. It’s a little jarring but because this is a weekly digital first series I am willing to cut it a little slack. The end of the Batman/Croc fight ends with Batman throwing a freeze grenade at Croc encomposing him completely in ice. It’s a pretty cool image even if the fights conclusion seems rushed.

After Gordon is saved we get a scene between Harley and Penguin. Penguin is frustrated about his role in Gotham and is looking to make a power play and Harley proposes that they work together to seize power in Gotham. It’s another well written scene by Tomasi that finally gives us a Harley Quinn that sees herself as an equal to Batman’s other more established rogues.  The alliance between Harley and Penguin is the most fascinating thing to happen in this book so far not only does it provide a more than satisfactory cliffhanger to end of the issue but it also lays the foundation to a story arc that actually seems substantial and important.

Hopefully, Tomasi and Bogdanovic can continue to provide us with issues of this quality. I know that the digital first format has it’s narrative and artistic limitations and it most certainly hurt the first few issues of this book but it seems like the creators are finally starting to get the hang of it. I’m actually looking forward to see what happens next.