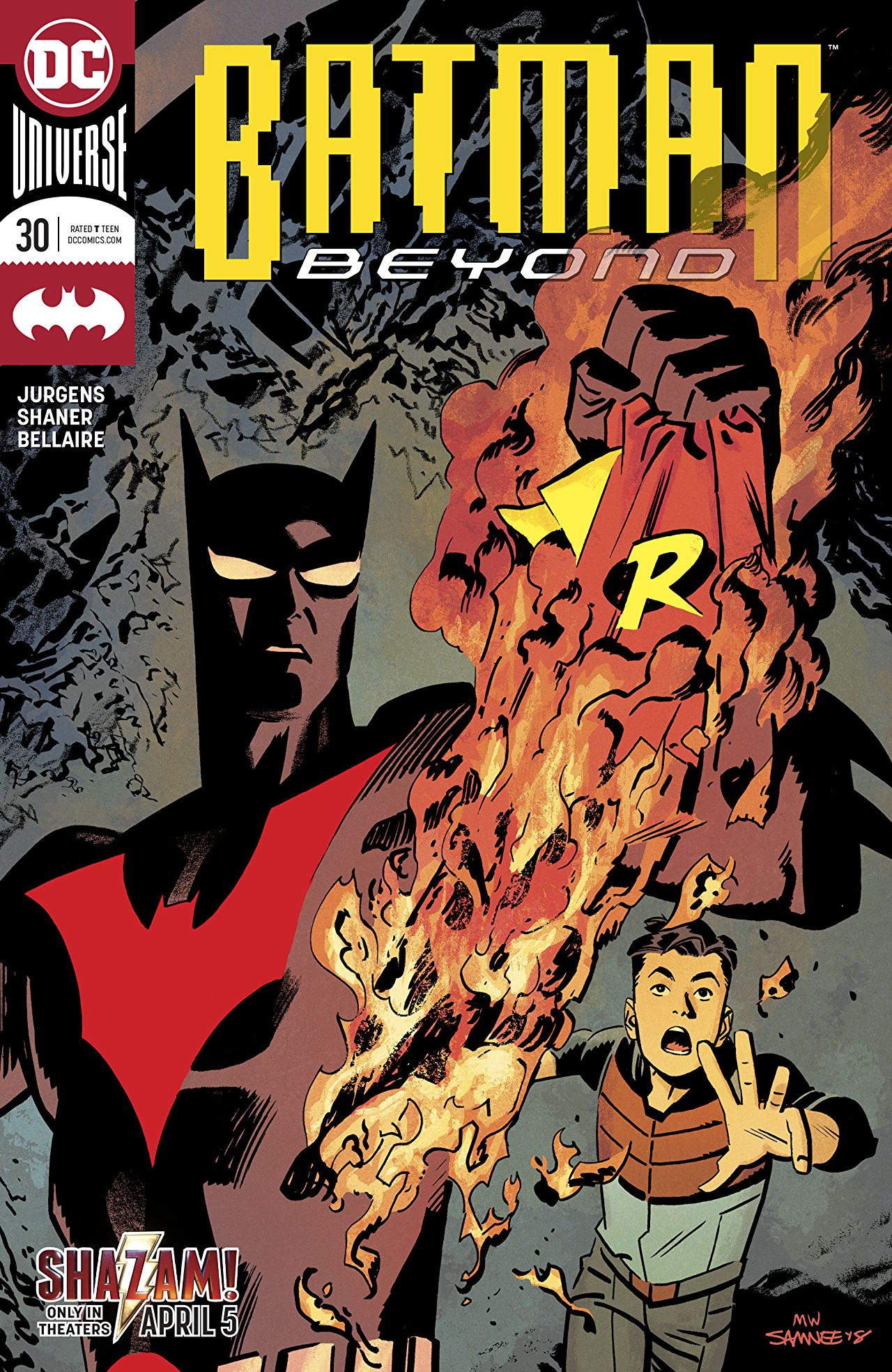 Overview: After a harrowing experience with the Joker, Robin deals with the consequences and attempts to resume crime fighting beside Terry. The comeback appears short-lived after he freezes in a fight and almost dies.

Synopsis (spoilers ahead): The issue opens with a nightmare scene depicting a victorious Joker infiltrating the Batcave and taking down all of the members of the new Batman family. Matt wakes suddenly just before dying in the dream. Lying in his bed, he tries to convince himself that he is not afraid and that he, most importantly, will not show any sign of fear to Terry or Bruce.

Down into the Batcave, Bruce and Dick discuss the apparent death of the Joker with Barbara. With all forensic tools at her disposal, Barb is certain that the Joker is indeed dead from heart failure. Once Matt arrives, the group discuss how Terry is shutting down any remnants of the Jokerz gang. Terry is across town and listening in on a gang as they plot to return to their usual habits despite Joker’s death. Matt decides to suit up and, against the advice of Dick, leaves to help Terry.

Terry attacks the hideout but struggles to shut down the group. Arriving on the scene, Matt helps to a point but is then face to face with “Hearts” who sweet talks him into freezing up. Just before being beaten, Dick shows up to save the pair.

The group return to the cave where Dick and Bruce agree that it is time for Robin to be retired in a way. Elsewhere, an older Harley Quinn takes the body of Joker out of the morgue.

Analysis: Although this issue did not focus on Batman at all, we did get to explore Matt’s character which has its benefits. I thought the general theme of post-traumatic stress was commendable for Jurgens to tackle here.

It does not feel as often that we dive into how crime fighting can take its toll on the young soldiers in Bruce’s overall crusade. Here we see a boy who does not have near the same level of training that the past Robins have had but still charges headlong into the fray every night. Augmented suits and tech can only go so far so and eventually, this lack of training comes around to Matt getting captured by the Joker. Jurgens explores the post-traumatic stress that accompanies such a near-death experience. The fact he freezes up, regardless of the circumstances of when he freezes, shows just how much he was affected. Although I am sure we will see Matt back in the suit before long, it was nice to see Dick and Bruce agree that, at least, Matt is not ready to be Robin. Dick’s concerns about the presence of a Robin feels so sane and rational it is nice to see that voice of reason in the story going against Bruce’s one-track or tunnel vision of the mission.

My only note about the artwork is the callback image of the Dark Knight Returns with Robin leaping over rooftops to lightning. I thought this was a neat image but could have been used more effectively when Matt (inevitably) comes back fully as Robin to save Terry. With him rushing into the night this image just felt like a wink to the reader more than anything else.

Final Thoughts: Overall, this issue had larger themes and focused on one of Batman’s support systems which are not usually highlighted in regards to the psychological stresses of the job. The ending hinted at Joker’s return (again) which soured things for me but it looks like Harley will be coming back which could make for some interesting scenes to see an older Harley in this world.