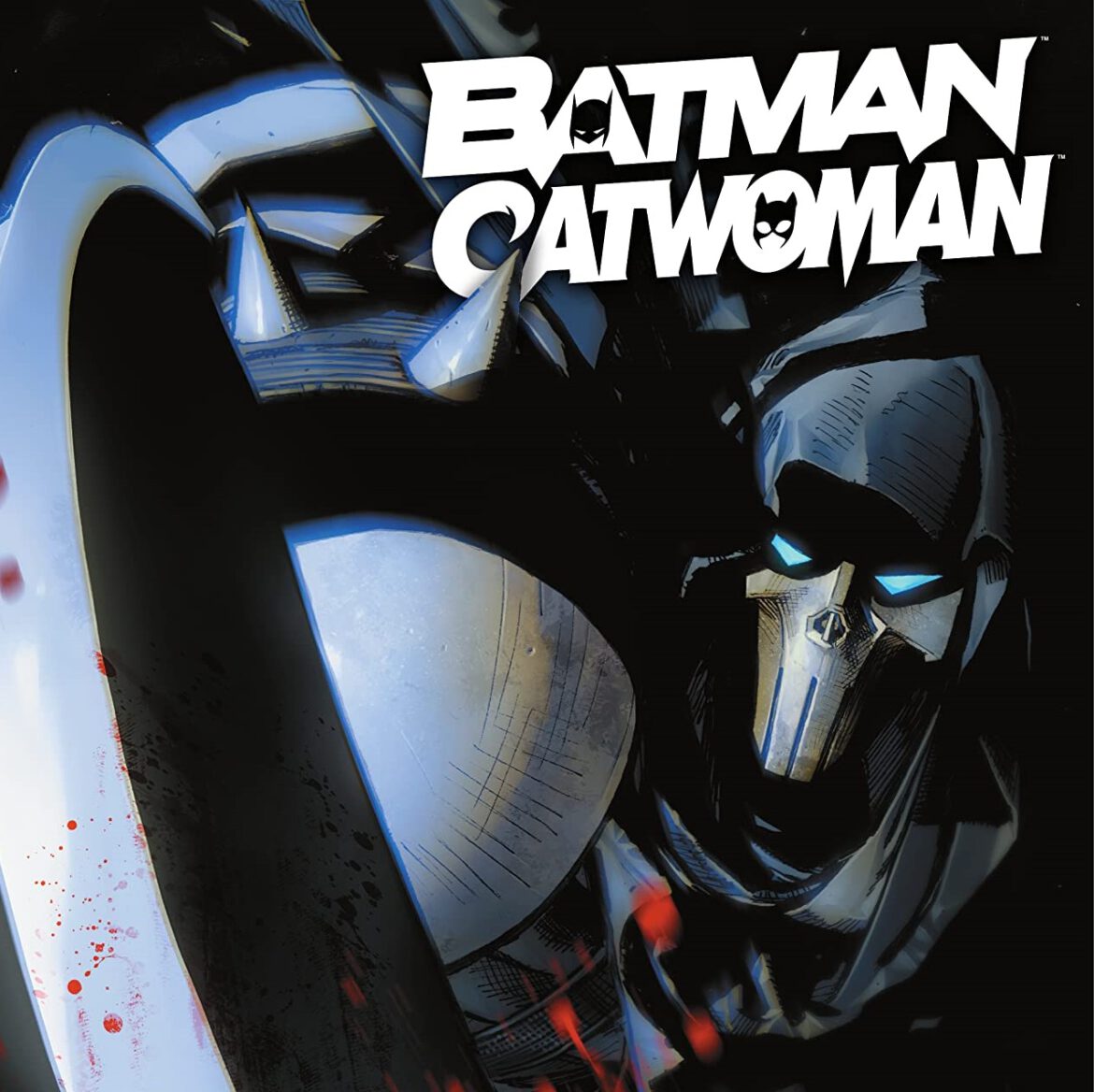 Overview: In Batman/Catwoman #6, Batman and the Phantasm battle it out, and Catwoman pulls a surprising double-cross.

Synopsis (spoilers ahead): Batman/Catwoman #6 begins in the past, Selina Kyle nurses a hangover with a bit of the hair of the dog that bit her. She’s in her apartment, and Joker is visiting. Joker points out an undecorated Christmas tree and asks about it. Selina tells Joker that it’s a gift from Batman. Joker wants to decorate it.

In the present, the Phantasm has Catwoman tied up as a way to lure Batman. She wants him to deliver the Joker to her, but Batman arrives alone.

In the future, Helena Wayne and an older Selina are sitting at a dining table in Wayne Manor. Helena tells her mother that she knows her mother killed the Joker (Batman/Catwoman #1). Selina ignores the statement and asks Helena if she’s going out on patrol. Helena says that she is, and Selina invites herself along.

In the past, Selina finds a box of ornaments in her closet. Joker finds a change of clothes for Batman and starts rummaging through it, commenting, “One wonders, doesn’t one? How they might fit a finer man.”

Selina opens the box of ornaments to discover that they are all cats. She is mortified at how much of a cliché that she’s become.

In the present, Phantasm tells Batman that she wants to kill Joker and that Batman should let her. Batman tells her that he can’t.

In the future, Selina, dressed up in her original Catwoman outfit, stands with Batwoman near the Bat-signal. Commissioner Dick Grayson is surprised to see the two of them, especially Catwoman in that old-school outfit.

Selina asks Dick how he’s doing, and he notes that despite Bruce being gone, the family Bruce made makes it feel like Batman is everywhere.

“You know, he considered you, your optimism, to be his greatest triumph, “ Selina says. “That he could give you what he couldn’t have. I think in his dark moments, that was his guiding light.” Selina tells Dick that Bruce was proud of him, and Dick thanks her. The two hug.

In the past, Selina recounts where she got her ornaments from, telling stories, one-by-one, of how she stole each one. Joker asks if there are any ornaments she hasn’t stolen, and Selina admits that there aren’t. Joker tells her that he adores her.

In the present, the Phantasm and Batman duke it out. Phantasm spars mentally with Batman as well, challenging his no-kill rule. Batman tells her that people who kill for good and righteous causes wage war with limitations. Batman has no limitations, so he doesn’t kill. As the two continue to argue, Catwoman pulls a double-cross on Batman, knocking him out.

The plan, ultimately, was for Catwoman to get Batman out of the way, so Phantasm and herself could kill Joker.

In the future, Catwoman and Batwoman take down a whole mess of goofy villains. Catwoman notes how most supervillainy is just fifty years of puns. Afterward, the two rest on a “World’s Finest” sign. Selina tells her daughter to repeat what she said before, but ask this time, don’t demand.

As Batman/Catwoman #6 comes to a close, in the past, Joker and Selina put up the ornaments. Before Joker leaves, Selina asks if she’s a good person. Joker tells her that not everything has to be funny, but her question certainly is. After Joker leaves, Selina questions herself. There’s a knock on her door. Thinking it’s Joker, Selina opens it to see Bruce Wayne.

Bruce tells Selina that without her, he is lost.

Analysis: It’s hard to pin down what Batman/Catwoman #6 is trying to say, as we’re now fully into the middle of this Black Label series. Previously, writer Tom King and artist Clay Mann have shown us a depiction of Catwoman teetering back and forth between her villainy and superhero antics. We’re reminded that Selina comes from the street and has to fight for everything she has, even her cat-themed Christmas ornaments. This also suggests that Selina originally was a thief by circumstance and necessity, and it’s not necessarily something she wants in the future. Her admonishing herself over her cat-themed ornaments and her comments, in the future, to her daughter about pun-themed villains is a clue into this mindset.

These ideas regarding Catwoman’s nature are consistent and on point with what readers have been seeing in this series thus far. Catwoman walks a fine line between villainous murderer and hero. Her relationships with both the Joker and Batman are a mirror of the inner turmoil pulling her in two directions.

What this series is not telling us, however, is where we’ll land on Batman by the final issue. In Batman/Catwoman #6, King and Mann are setting up Batman to be a flawed hero. We get explicit comments about this in Batman’s fight with Phantasm, as Phantasm tries, again and again, to poke holes in Batman’s thinking and resolve. While the two duel, Andrea Beaumont is trying to prove to Bruce Wayne that his thinking is simple and single-minded. It’s not helping anyone long-term, especially when it comes to the Joker.

This is subtly reflected in Commissioner Dick Grayson in the future. When Catwoman and Batwoman arrive, Dick notes that it feels like Batman is everywhere, despite him being gone. Batman’s determination to create a family of vigilantes and heroes has covered a wide enough reach of Gotham that it feels more protected than it ever has. Batman’s legacy has flourished since his absence, suggesting that while he never could fully save Gotham in his day, he set a foundation for others to take up the charge in the future.

Selina responds to Dick by telling him that Bruce considered Dick to be his greatest triumph. This implies that maybe Batman knew that he, alone, couldn’t save Gotham. It implies that Bruce could have been setting up the Bat-Family in hopes of achieving a dream for Gotham one man can’t effectively change by himself.

Right now, these are just ideas King and Mann are toying within the background of this series. We won’t know where they’ll fully land until the series’ conclusion. Either way, King is once again walking a fine line that we’ve seen in his previous Batman run. He’s juggling the idea of both celebrating and idolizing Batman, as well as trying to make the hero into a flawed character. It’s not an easy task, and King is one of the few writers who attempts to accomplish this.

The action in Batman/Catwoman #6 isn’t as exciting as it has been in the last five issues. Part of that might be the pacing. The creative team’s commitment to chopping this story up into three different timelines interwoven together often kills any sort of momentum when something exciting is happening in one of the three timelines. What should have been an exciting fight between Phantasm and Batman is segmented, so it looks like a collection of glorifying poses rather than a fluid battle.

Don’t get me wrong – the Phantasm looks cool. The design is fantastic, and the coloring by Tomeu Morey is wonderful. The fight, unfortunately, has no feeling. Where there should be tension, emotion, and rage, there’s nothing. It’s a shame.

Despite a lackluster fight, there are some cool moments here. When Helena first confronts Selina about killing the Joker, Mann uses a five-panel grid to show mother and daughter sitting at a dining table together. Selina frames one end of the page while Helena frames the other, and everything between them is empty space. It’s a nice touch that shows the distance between them at the opening of Batman/Catwoman #6, a gap that we assume closes by this issue’s end.

Tomeu Morey’s coloring is the star of Batman/Catwoman #6. Morey has a lot to play with here, incorporating a flurry of bright colors against dark and gloomy colors. The jump between timelines has given Morey the ability to showcase and juxtapose all sorts of coloring effects, which makes this issue absolutely beautiful to look at.

Batman Catwoman #6 is more of the same from writer Tom King and artist Clay Mann. There are some nice touches in this issue, but there’s just no tension when there should be.