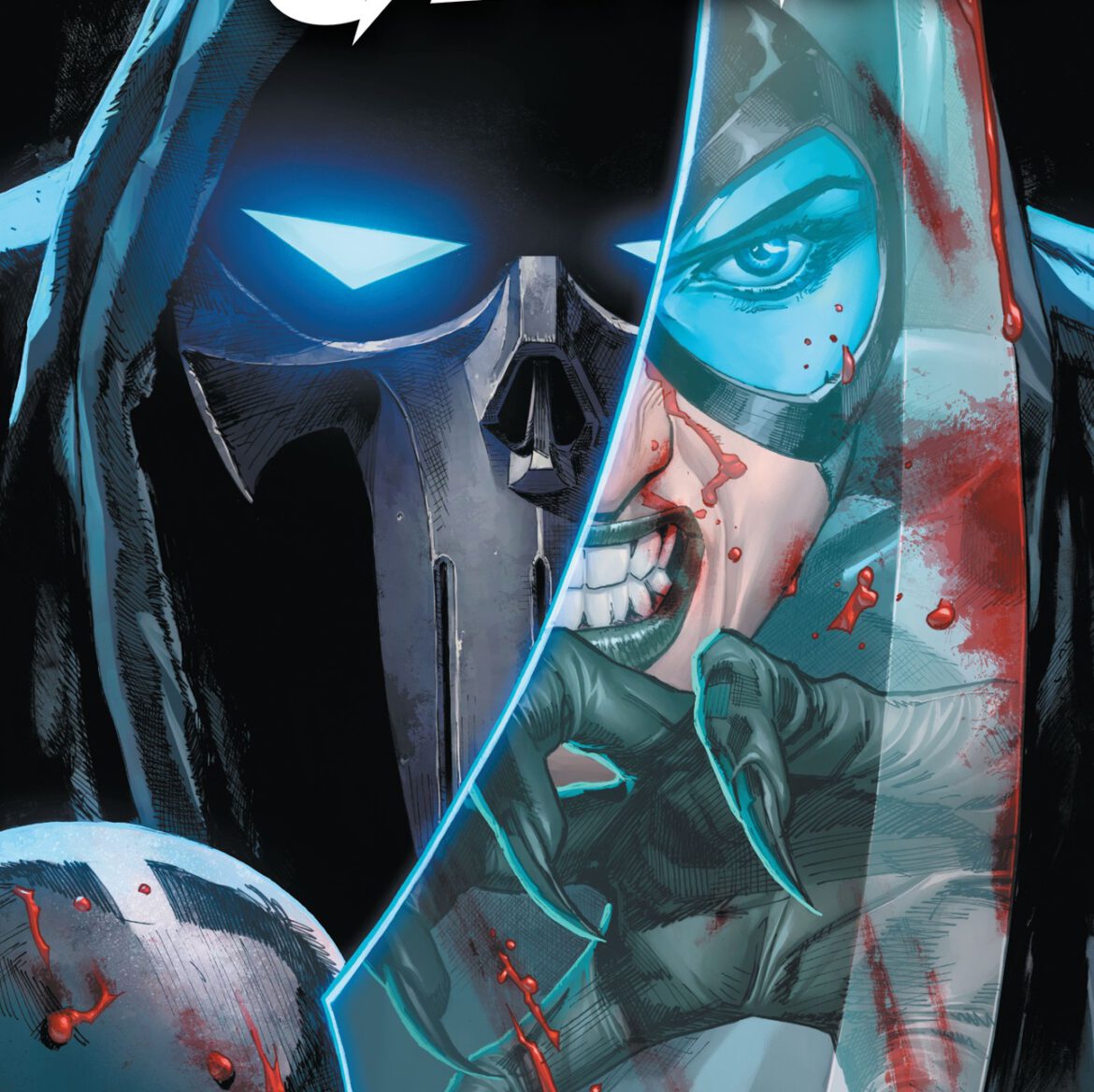 Overview: In Batman/Catwoman #3, Batwoman, Helena Wayne, investigates the murder of the Joker while Catwoman struggles to keep both her criminal side and her vigilante side from falling apart.

Synopsis (spoilers ahead): In the future, Batwoman, Helena Wayne, stands atop the GCPD rooftop. The Bat-signal is shining, and standing near her is Commissioner Dick Grayson. Dick has summoned Batwoman because a body was found in a Florida retirement community, one belonging to the Joker (Joker’s throat was slashed by Catwoman in Batman/Catwoman #2). Batwoman mentions that they’ve been looking for the Joker for ten years. Dick reminisces about the first time Joker entered his life and how being a vigilante wasn’t so fun anymore because of it.

Out of her Catwoman costume, Selina Kyle tracks down Joker and pummels him. She tells the Clown Prince of Crime that Batman found Joker’s reindeer, each one a victim with antlers sewn onto his/her head.

In the future, Helena and a much-older Selina have dinner at Wayne Manor. Selina is telling Helena about the Wayne fortune that will pass on to Helena once Selina passes away. Helena jumps into discussing her conversation with Dick, bringing up the body of the Joker. Selina seems to ignore Helena, going on about her beginnings as Catwoman and her twilight years as the richest woman in Gotham City. Of note, Selina mentions the compromises she had to make as Catwoman and how she’s lived her life in those compromises.

In the present, Batman confronts Joker, who is locked up in a glass cage somewhere. The Phantasm has killed another of Joker’s henchmen, this time a Paul Fleischman. The GCPD, Batman notes, found the tattoo inscribed in Paul’s tongue. It reads, “I’m hiding with the Batman and the Catwoman.”

Batman threatens to send Joker out to the world, so the Phantasm can find him. Joker tells Batman that he won’t do that, as that would be a decision that would kill Joker, and Batman doesn’t kill.

At Wayne Manor, Bruce notes the contusions and wounds on Selina’s skin. He tells her he can help her, that he won’t let anyone hurt her. Selina tells him that he’s too late for that, but she offers that he could make her feel a little better. The two make love.

In the future, Helena tells her mother via comm that the DNA test results came back, and the results confirm that the body belongs to the Joker. Commissioner Grayson is taking over jurisdiction of the murder investigation, to which, Helena notes, she’s going to participate. Selina chides her daughter, saying that Helena is too much like her father. Batwoman notes that it’s strange that the Joker and Bruce died within weeks of each other.

“I suppose they were always tied, those two,” Selina says. “They existed with each other, maybe for each other. And so they live together. They leave together.”

Back in the present, the Phantasm attacks a sleeping Selina. Selina blocks the Phantasm’s attack and the two fight. Bruce calls Selina over comm, noting that he’s on a mission as Matches Malone at the moment, but he’ll check the security alert he just received from Wayne Manor immediately after. As Phantasm and Selina fight, the two tumble out of a window and into the snow, both seemingly knocked unconscious.

Some time ago, Catwoman opens a safe (that was the subject of much questioning in Batman/Catwoman #2). Inside, the Joker is hiding, and he gifts Selina a necklace belonging to Leon the Lion. He then tells her about a murder he’s planning at the Gotham City Ice Rink. It’s his way of informing her, so she won’t be surprised by another reindeer situation. Joker then chides Catwoman, telling her that it’s going to make her life unnecessarily hard because she can save these people, which would raise Batman’s suspicions as to why she knew about the planned murder ahead of time.

“Are you Catwoman? Or are you Batman?” Joker asks.

Back in the future, Helena has dinner with Selina once more. She opens by saying that she saw the apartment belonging to the Joker in Florida. Selina asks if there were any clues, to which Helena responds that the scene was clean.

Analysis: The pieces are finally coming together in this miniseries by writer Tom King and artist Clay Mann. In the past two issues, readers have been privy to snippets of three wholly different timelines. The details have been sparse (in typical King fashion), as the books have focused on more of a mood and an overall theme than a linear storyline. This wasn’t necessarily bad, but it made the books, particularly Batman/Catwoman #1, difficult to follow.

In this third installment, we’re finally getting a sense of direction and momentum, and the story is clearly centered around Catwoman’s dual role as Batman’s lover and her criminal background. In one of her brief conversations with her daughter, Helena, Selina talks about how, because of her abandonment as a child, she had to live with compromises, thus becoming Catwoman. It’s a mode of living she’s continued with throughout her life, and in the end, Selina seems content in the idea that her compromises ultimately led her to become the richest woman in Gotham City. To frame it simply, it was the “right” path., or so Selina thinks.

In the present and past timelines, however, there’s tension in this dual world Catwoman lives in. She hasn’t stepped away from her criminal background, continually communicating with the Joker behind Batman’s back. Joker, for his part, relishes in this and is clearly using Catwoman’s double life as a way to strike back at both Selina and Batman. It’s the more intimate Joker plots like this that are most compelling, and if this trajectory continues wherein Joker tugs at each character’s emotional connection to each other, this could be one of the better Joker stories in recent years.

Adding to the drama, Batwoman clearly suspects foul play with the Joker’s murder following so closely behind Bruce Wayne’s death. She hasn’t accused her mother yet, but the fact that Selina is disregarding Helena is probably arousing suspicions. In fact, in this issue, it’s Batwoman who seems to be asking probing questions about Selina’s “other life” rather than Batman, which was one of the themes in the previous issue.

This plays wonderfully into the overall theme of this issue, which once again seems to center around Selina Kyle. This time, however, the theme seems to be how, despite Selina ascending to becoming the richest woman in Gotham in the end, her life has constantly been one of secrets and hiding one half from the other — from cradle to the grave, if Selina’s own words are to be believed. It’ll be interesting in the next issue to see if Catwoman decides to tell Batman about Joker’s plot to kill everyone at the ice rink.

Beyond the intense, thematic plotting and typical non-linear storytelling from Tom King, Clay Mann continues to deliver some of the most gorgeous artwork in comics right now. The fight between Selina and the Phantasm is noteworthy, as are the gruesome depictions of Joker. There’s something sinister, yet seductive, in the way Joker is drawn, which helps create this aura of unpredictability, making the Joker terrifying again. Seeing him in a suit made of money stuffed into a safe is also quite unsettling.

The best new addition to this series is Batwoman’s new outfit. It’s so simple, and it looks so cool. It’s a neat combination between Catwoman’s outfit and Batman’s, and of course, it keeps Batman’s ears.

Batman/Catwoman #3 finally starts tethering plot points together to create a compelling exploration of Catwoman’s dual life as both a vigilante and a criminal. The pull Joker and Batman had on her is similar to the pull her daughter, Batwoman, has on her in the future, which proves to be quite the intense melodrama.