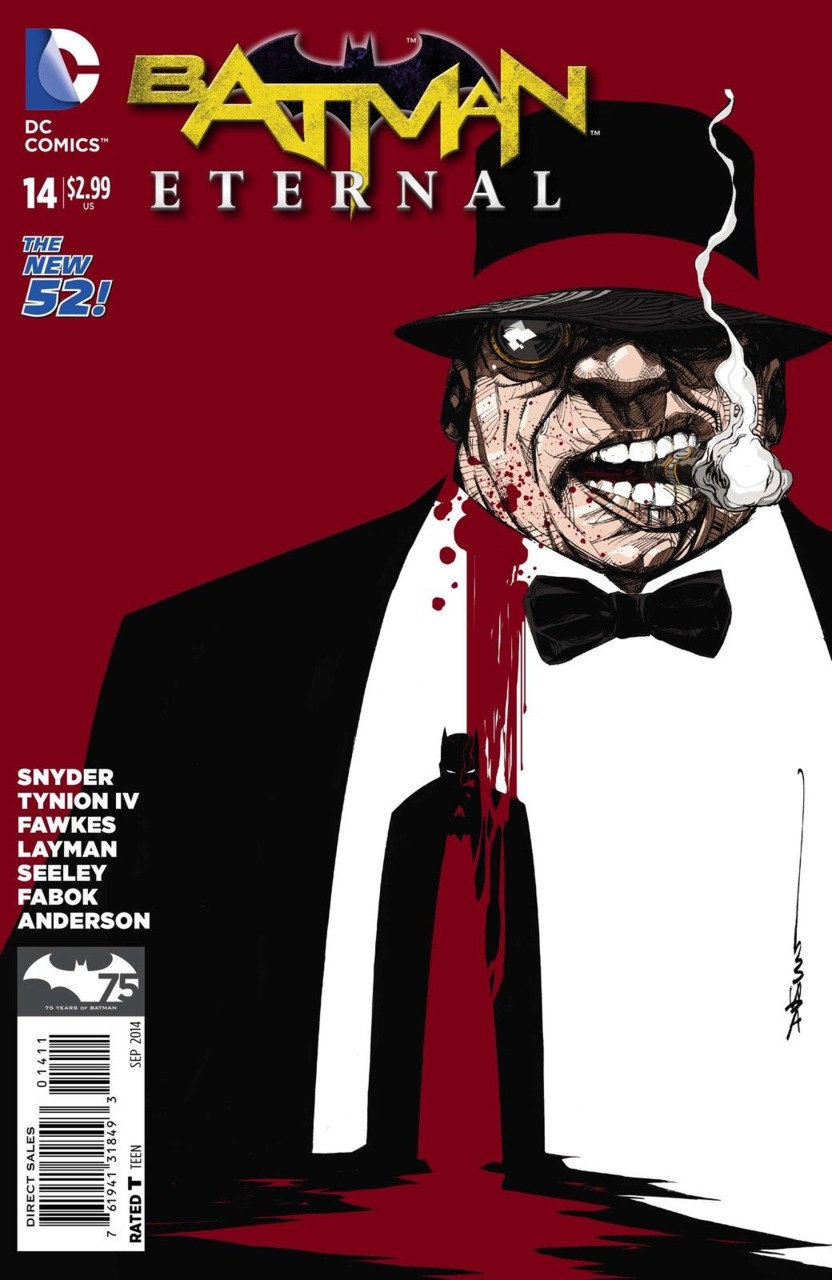 Batman Eternal has been picking up steam in the last few weeks, and it's steadily becoming one of better comics from week to week. This issue is more of the same.

Dustin Nguyen's cover is awesome, as always. Tynion is doing the script, once again. He is pretty solid, doing the master work on this series. His issues have been the best so far.

Jason Fabok is back on the art! His art is so solid, dark, and just plain awesome. His Batman is a freaking beast, and it's easy to tell apart from his characters.

Bard is seeing Mayor Hardy, playing back for him the phone call that he recorded between Falcone & Forbes. He knows that Hardy is involved, and threatens him. Penguin is furious after the sinking of his casino, and in his rage, kills one of his henchmen with his bare hands. Another one of his men comes in, and tells them that they got a call on Falcone's location (remember this. It'll come up again later). Falcone is wanting to pay off the rest of Penguin's men, leaving him with nothing, when suddenly his call is interrupted. Falcone opens up his door, to find all of his men murdered. He follows the trail of bodies to find a crazed, animalistic Penguin. That's right… the Batman Returns Penguin has found his way into the comics (Dane from Bat-Fans would be so proud). Penguin is about to kill Falcone, when they are interrupted by the GCPD along with Vicki Vale. They get a nice picture, and story for the papers. They book them both, and haul them off to prison.

Gordon is still in Blackgate, and is still contemplating James Jr.'s proposal from the night before. At 2:46, he makes his way down the hallway, when he comes across Batman. Gordon says he came down here to lock the door. Batman believes him, and warns him that Falcone and Penguin are on their way to Blackgate, and that things will be more dangerous there. Gordon tells Batman to make allies with Bard, because he doesn't know how much longer he will last in Blackgate. Batman meets up with Bard on the rooftop of GCPD. Batman tells him that he is impressed, but that he knows that Bard called into Penguin's henchmen the location of Falcone, which led to the death of a dozen men… Dude…

And lastly, Scarecrow is scared to death. He's running for his life. He is grabbed by some hands that come out of the walls, and pull him in. Joker's Daughter is about to give him the axe, saying that they are expecting Batwing & Spectre's company soon.

Another awesome installment of Batman Eternal. Although it's not as good as last issue, it's still a really good read. We get more variety, more stories, and more development. It seems we may have a Batwing / Spectre issue next by Ray Fawkes, but I hope it's better than the last to keep up this momentum.