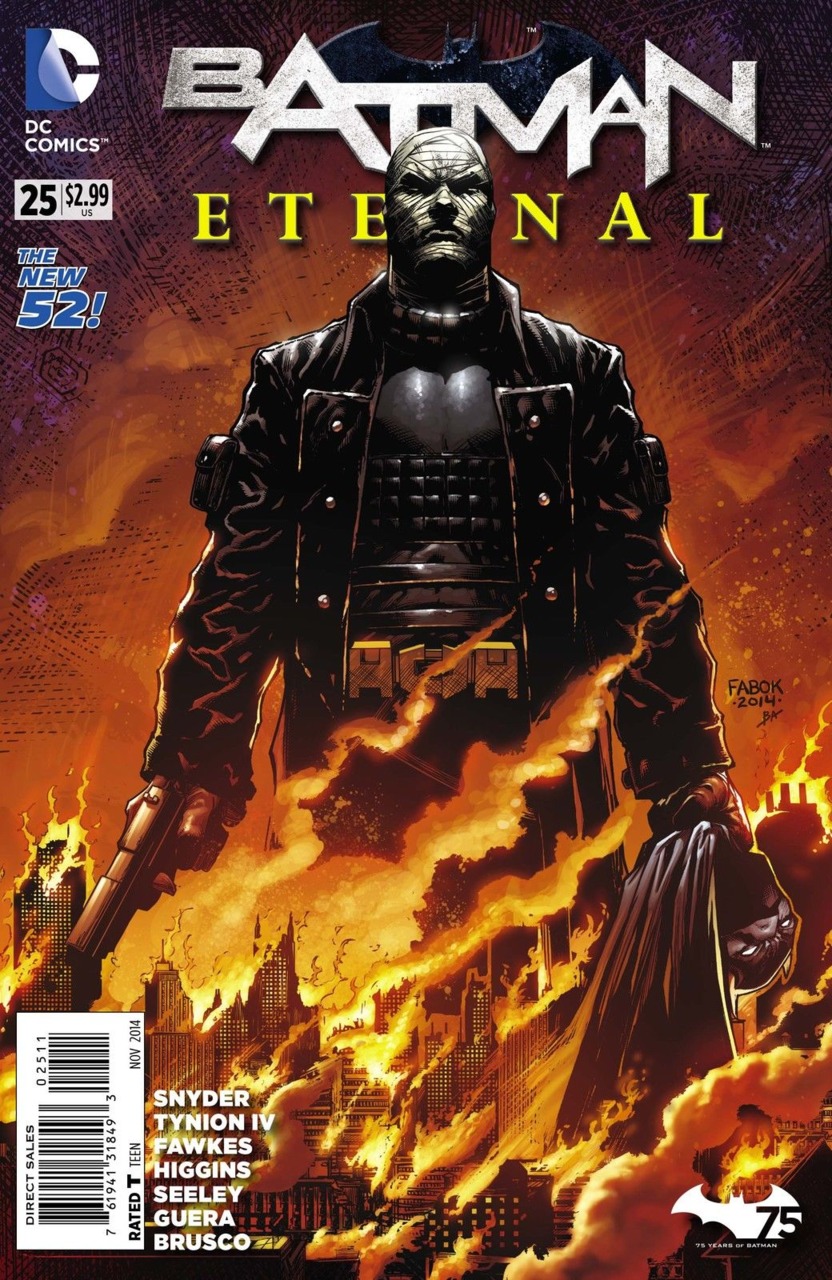 We’ve hit the 25th mark on Eternal, and it seems we are about halfway through this story. James Tynion is back this issue, which seems weird to me. The group was doing three issue arcs, and now the last four or five issues have been done by a different writer each time. I’m not sure if they are trying something different, or if there is a story reason behind it. Tynion delivers a solid issue, but it fell short of memorable for me. While nothing huge happened, it did seem as though we got a little bit of progression across the board, here.

What I didn’t like the most was the art. R.M. Guera does the art, this issue. Now for the first few pages, I was impressed. I liked what I saw. But once I got to see this guy’s interpretation of Batman… It went downhill from there. Everyone’s faces were inconsistent and about as mailable as clay. Their nose and mouth at times look as though they are trying to escape the face. I’m not sure if this is just how this guy draws, because I know he’s not new, or if he was just rushed. Either way, the results weren’t great.

Well, as we know, Bard went to mayor Hardy to try to establish Martial Law on Gotham, but apparently that was rejected. So he goes to Vicki to print a story about the imminent threat to further prove his point. This disrupts the city into chaos, and there are riots in the streets.

A few guys try to rob a little girl of some water, when Harper tases them. Tim compliments her, saying she doesn’t need the guns, but she fights back, saying she likes them. Tim then receives a call from Jason, telling him about Alfred. Tim meets up in the hospital room, as he catches Tim up to speed. They mess with each other about girls, as it seems Tim and Harper are developing a relationship, but it seems Jason and Barbara are as well. Before, I doubt I’d be for this matchup, but in the New 52, they seem to be a fit.

Barbara takes a phone call from her dad, but doesn’t talk long. She’s frustrated, because the evidence they got to prove his innocents hasn’t done anything for him. We also see that she has fourteen missed calls from Jason. She gets another call, but from Tim, telling her to suit up.

Julia is still helping Batman as Penny-Two, and she sends him the prison feed of Bard releasing the Architect. Batman heads to Bard’s apartment, where he comes across a hologram of Hush. He has a picture of Batman going into Bard’s apartment and threatens to send it in, kill his partners, and the hologram shuts off as the building explodes.

Mayor Hady is upset because he believes Bard to be dead, but Bard stumbles in, acting like he barely got out in time, and convinces Hady to declare Martial Law. Meanwhile, Red Robin, Red Hood, and Batgirl pull Batman out of the ruble of the building.